Download this LitChart! (PDF)
Teachers and parents! Struggling with distance learning? Our Teacher Edition on Monster can help.

Get LitCharts A+
LitCharts assigns a color and icon to each theme in Monster, which you can use to track the themes throughout the work.

Monster depicts the murder trial of Steve Harmon, a 16-year-old black kid from Harlem. Steve is accused of being an accomplice to the murder of an immigrant shopkeeper named Mr. Nesbitt, the result of a botched robbery. Even though Steve’s alleged role in the murder is minimal, the prosecutor sees Steve only as a “monster,” completely disregarding the rest of his life and identity. In a similar fashion, Steve finds during his weeks in prison that he is still not recognized as a person unto himself, but instead seen as merely an inmate. By depicting the legal system’s dehumanization of Steve and the way that this causes him to also dehumanize himself, Monster suggests that both the court and the prison system do not treat people accused of crimes as full human beings, but rather as moral degenerates who deserve to be deprived of all rights and humanity.

Although Steve is a sensitive and creative individual, the state prosecutor sees him as a monster and a criminal rather than a human being. Though only 16, Steve is a filmmaker at heart. He depicts all of the courtroom scenes and much of his time in prison through a screenplay he is writing, and Steve’s film teacher, Mr. Sawicki, testifies that Steve’s films are optimistic and honest, highlighting the best aspects of his violent neighborhood. Steve’s own artistic interpretation of events and Mr. Sawicki’s character witness establish that Steve is a sensitive and dynamic human being. However, in her opening remarks, state prosecutor Sandra Petrocelli labels anyone tangentially related to the murder, including Steve, as a monster who does not value other people’s right to live. Petrocelli wants Steve and James King (another man charged in relation to the crime) to be convicted of felony murder, and by labeling them all as irredeemable, inhuman monsters, she hopes to immediately sway the jury towards seeking as harsh a punishment as possible. Petrocelli dehumanizes Steve in order to accomplish her goal as a prosecutor, which suggests that prosecutors do not view their defendants as human beings, but simply as targets to take down. Furthermore, Steve’s defense attorney Kathy O’Brien warns him that, since he is a black teenage boy, half of the jury will believe he is guilty as soon as they see him, suggesting that on top of Petrocelli’s dehumanizing remarks, the jurors’ racial prejudice also dehumanizes Steve and other people in his position. Racism makes it more likely that the jury will view black defendants not as complex, individual human beings, but merely as stereotypes.

The prison system in Monster is also depicted as dehumanizing, refusing to acknowledge that inmates are also complex and emotion-driven human beings. Although Steve is only 16, he is placed in a prison for adults. When his younger brother Jerry is not allowed to visit Steve because he is a child and the prison is a dangerous place, Steve realizes that if he himself were a visitor, rather than an inmate, he would not be allowed in the prison, either. This irony suggests that Steve’s status as a prisoner removes any rights or protections he should be entitled as a human being and a legal child. Furthermore, Steve observes that all that inmates talk about is fighting, sex, or appealing their convictions, suggesting that prison dehumanizes people by narrowing the sphere of things they’re able to care about. Even Steve finds it difficult to think about his family or friends, since he is consumed by fear about his court case. Prison, it seems, is such an intensely confining space that it reduces human beings to mere shells of what they might have been, forcing them to think only of survival in their narrow world at the expense of all other interests or relationships that once made them who they are. Finally, the guards add to the prisoners’ dehumanization. As Steve faces the horrifying prospect of spending most of his life in jail, the guards mockingly place bets on whether Steve will get a full life sentence or not and ask him to put money into the pool, as well. The guards’ complete disregard for Steve’s mental wellbeing further suggests that the operators of the prison do not regard their subjects as human beings with hopes, fears, and the right to be respected, but merely as pieces in a machine.

Steve and his father Mr. Harmon both come to internalize this dehumanized vision of Steve, which tragically suggests that when the courts and prisons view a person only as a monster or a criminal, that person will come to believe it. After hearing Petrocelli call him a monster and seeing the jurors’ disdain for him, Steve begins to think of himself as a monster as well, referring to himself as a monster in his personal notes. Tragically, Mr. Harmon struggles not to see his son that way, even though he doesn’t know if Steve is guilty or innocent. When he visits Steve in prison, Steve realizes that their father-son relationship has been broken, noting, “It’s like a man looking down to see his son and seeing a monster instead.” Both Steve and Mr. Harmon’s struggle to not view Steve as a monster suggests that when the courts and the prison system so swiftly dehumanize defendants, the consequences are personal and far-reaching. 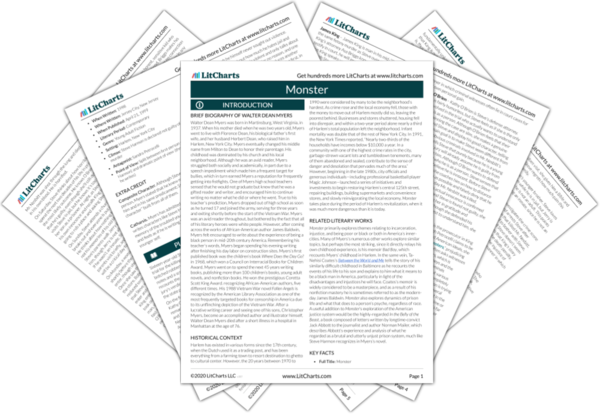 Dehumanization and Racism Quotes in Monster

Below you will find the important quotes in Monster related to the theme of Dehumanization and Racism.
Prologue Quotes

The best time to cry is at night, when the lights are out and someone is being beaten up and screaming for help. That way if you sniffle a little they won’t hear you. If anybody knows that you are crying, they’ll start talking about it and soon it’ll be your turn to get beat up when the lights go out.

[Steve] is writing the word Monster over and over again. A white hand (O’BRIEN’s) takes the pencil from his hand and crosses out all the Monsters.

Miss O’Brien says that Petrocelli is using Bolden’s testimony as part of a trail that will lead to me and James King. I think she is wrong. I think they are bringing out all of these people and letting them look terrible on the stand and sound terrible and then reminding the the jury that they don’t look any different from me and King.

I want to look like a good person. I want to feel like I’m a good person because I believe I am. But being in here with these guys makes it hard to think about yourself being different. We look about the same, and though I’m younger than they are, it’s hard not to notice that we are all pretty young.

STEVE: I thought you’re supposed to be innocent until proven guilty?

O’BRIEN: That’s true, but in reality it depends on how the jury sees the case. If they see it as a contest between the defense and the prosecution as to who’s lying, they’ll vote for the prosecution. The prosecutor walks around looking very important. No one is accusing her of being a bad person. They’re accusing you of being a monster.

Miss O’Brien looked at me—I didn’t see her looking at me but I knew she was. She wanted to know who I was. Who was Steve Harmon? I wanted to open my shirt and tell her to look into my heart and see who I really was, who the real Steve Harmon was.

Seeing my dad cry like that was just so terrible. What was going on between us, me being his son and him being my dad, is pushed down and something else is moving up in its place. It’s like a man looking down to see his son and seeing a monster instead.

I remembered Miss O’Brien saying that it was her job to make me different in the eyes of the jury, different from Bobo and Osvaldo and King. It was me, I thought as I tried not to throw up, that had wanted to be tough like them.

There was a fight just before lunch and a guy was stabbed in the eye. The guy who was stabbed was screaming, but that didn’t stop the other guy from hitting him more. Violence here is always happening or just about ready to happen. I think these guys like it—they want it to be normal because that’s what they’re used to dealing with.

[O’Brien] said that Bobo’s testimony hurt us a lot and that she had to find a way to separate me from King, but King’s lawyer wanted to make sure the jury connected us because I looked like a pretty decent guy.

I think [Steve’s] an outstanding young man. He is talented, bright, and compassionate. He’s very much involved with depicting his neighborhood and environment in a positive manner.

[O’BRIEN’s] lips tense; she is pensive. She gathers her papers and moves away as STEVE, arms still outstretched, turns toward the camera. His image is in black and white, and the grain is nearly broken. It looks like one of the pictures they use for psychological testing, or some strange beast, a monster. 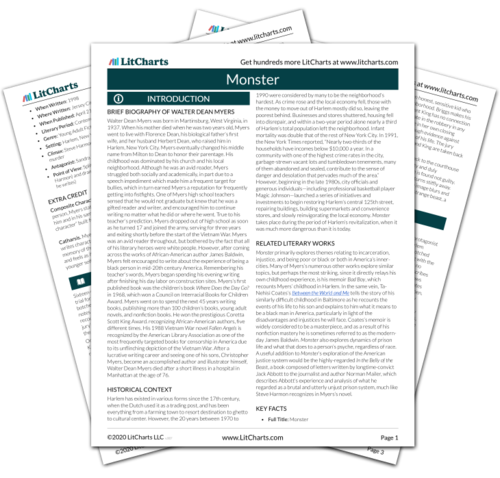 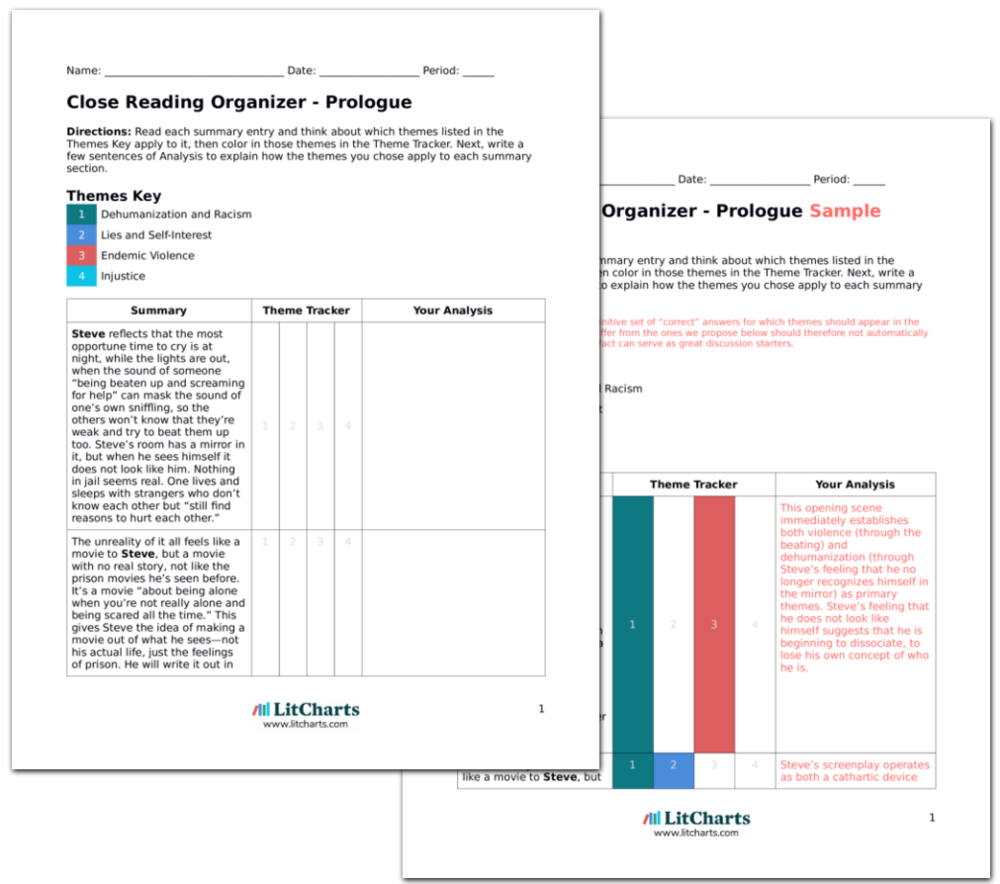