Great Expectations is a novel written in the nineteenth-century by Charles Dickens. It tells the story of Pip, an English orphan who lives with his oppressive older sister and kindhearted uncle in southeast England. Pip eventually becomes a blacksmith before an anonymous benefactor gives him a large amount of money and tells him to move to London to learn how to be a gentleman. This coming-of-age tale resonates deeply with Matilda, who relates to Pip because—among other things—she has been estranged from her father and is frequently at odds with her mother. She sees the book as representative of the fact that change can happen to anybody, and that disagreeable circumstances can take an unexpected turn for the better. As Pip evolves as a character, Matilda considers what it means to be a gentleman, a thought process Mr. Watts furthers when he tells his class that a gentleman always does the right thing. In this way, Great Expectations comes to embody a sense of morality for morality’s sake, a philosophy that promotes the intrinsic goodness of being an upstanding person. As Matilda ventures more deeply into these ideas, she finds herself capable of escaping the turbulent wartime environment in which she lives, turning Great Expectations into a window through which she can access a foreign world that sheds new light on her current reality. Unfortunately, she also discovers that the secular commitment to goodness that Great Expectations champions is at odds with her mother’s Biblical beliefs, which uphold that morality should be rooted in religion. The presence of Dickens’s novel in the village ultimately creates incredible tension, as people like Dolores view its remote ideas as threatening to Bougainville’s traditional beliefs. As such, Great Expectations symbolizes both the positive aspects of embracing foreign stories and the danger of introducing new narratives into volatile communities.

The Mr. Pip quotes below all refer to the symbol of Great Expectations. For each quote, you can also see the other characters and themes related to it (each theme is indicated by its own dot and icon, like this one:

). Note: all page numbers and citation info for the quotes below refer to the Dial Press edition of Mr. Pip published in 2008.
Chapter 4 Quotes

There was also a lot of stuff I didn’t understand. At night I lay on my mat wondering what marshes were; and what were wittles and leg irons? I had an idea from their sound. Marshes. I wondered if quicksand was the same. I knew about quicksand because a man up at the mine had sunk into it, never to be seen again. That happened years earlier when the mine was still open and there were white people crawling over Panguna like ants over a corpse.

This was the first time I had been in a position to tell her anything about the world. But this was a place she did not know about and hadn’t heard of. She couldn’t even pretend to know, so it was up to me to color in that world for her. I couldn’t remember the exact words Mr. Watts had read to us, and I didn’t think I would be able to make it possible for my mum to slip into that world that us kids had or into Pip’s life or some other’s, that of the convict, say. So I told her in my own words about Pip having no mum or dad or brothers, and my mum cried out, “He is lost.”

The trouble with Great Expectations is that it’s a one-way conversation. There’s no talking back. Otherwise I would have told Pip about my mum coming to speak to the class, and how, seeing her at a distance—even though only two desks back from the end of the room—she had appeared different to me. More hostile. […]

Whatever I might say about my mum to Pip I knew he wouldn’t hear me. I could only follow him through some strange country that contained marshes and pork pies and people who spoke in long and confusing sentences.

I know […] you have been hearing some story from Mr. Watts, and a story in particular, but I want to tell you this. Stories have a job to do. They can’t just lie around like lazybone dogs. They have to teach you something. For example, if you know the words you can sing a song to make a fish swim onto your hook. There are even songs to get rid of skin rash and bad dreams.

My mum said she had no problem with stating the obvious. The problem was that silly blimmin’ word insensibly. What was the point of that word? It just confused. If it hadn’t been for that silly bloody insensibly, she’d have gotten it the first time. Instead, insensibly had led her to suspect it wasn’t so straightforward after all.

Unlock with LitCharts A+
Get the entire Mr. Pip LitChart as a printable PDF.
"My students can't get enough of your charts and their results have gone through the roof." -Graham S.
Download 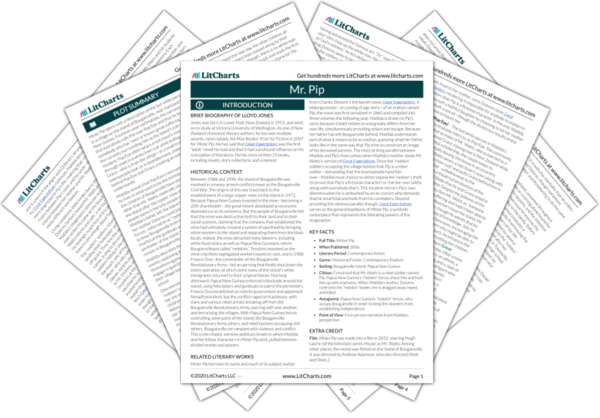 The timeline below shows where the symbol Great Expectations appears in Mr. Pip. The colored dots and icons indicate which themes are associated with that appearance.

...and came to be called Pip.” So began his reading of the first chapter of Great Expectations , which he described to the children as “the greatest novel by the greatest English... (full context)

Matilda was quickly swept away by Great Expectations , feeling she had “been spoken to by this boy Pip” after just the first... (full context)

As Mr. Watts’s reading of Great Expectations progressed, Matilda got to know Pip more and more and realized she had certain things... (full context)

...to tell her anything about the world,” Matilda notes in regards to her narration of Great Expectations to Dolores. When her mother learned that Pip is an orphan, she lamented, “He is... (full context)

When the class wasn’t focusing on Great Expectations , it became clear that there were large gaps in Mr. Watts’s knowledge. Still, he... (full context)

...keeps mosquitos away. When she finished, she stayed to listen to Mr. Watts read from Great Expectations . Matilda paid close attention to Mr. Watts’s narration, knowing that Dolores would want a... (full context)

...known that the word means “frosty” until Mr. Watts told her earlier that day. Narrating Great Expectations to her mother in the dark, Matilda waited for Dolores to ask what “rimy” meant,... (full context)

Matilda’s curiosity about Mr. Watts grew alongside her love of Great Expectations . One day she saw him on the beach dressed in shorts instead of his... (full context)

...[her relatives],” a sentiment for which her mother blamed Mr. Watts and his teaching of Great Expectations . (full context)

The class finally finished Great Expectations in February. Matilda found herself somewhat disappointed with the ending and unsatisfied by the idea... (full context)

...To clear up matters, Mr. Watts asked Matilda to run into the schoolhouse and retrieve Great Expectations , which he told her was sitting on the classroom’s front desk. When she arrived,... (full context)

...took it down and unrolled it. In doing so, she found Mr. Watts’s copy of Great Expectations stashed covertly in the middle. Although she felt betrayed by her mother in that moment,... (full context)

...last time. Once again, he asked for Pip, and Dolores made no move to retrieve Great Expectations . When it became evident to the officer that the village wouldn’t cooperate, he doused... (full context)

...with this appreciation of the mind, he suggested that the class work together to rewrite Great Expectations by memory. Together, they decided to accumulate the fragments they could recall, recording them in... (full context)

Matilda committed herself wholeheartedly to the task of remembering the lines and scenes of Great Expectations . She points out that it was difficult to recall lines when sitting in the... (full context)

...her mother’s exasperated and mean-spirited rants were reminiscent of Estella’s cold treatment of Pip in Great Expectations . When Dolores erupted one day with the line, “Do you not have a shadow... (full context)

...Mr. Watts was back in the classroom encouraging his students to summon their memories of Great Expectations . At this point, Matilda recounts the circumstances that led to her father’s departure from... (full context)

...as a middleman between Pip and his anonymous guardian (who gives him a fortune) in Great Expectations . Like Mr. Jaggers, this man represented an opportunity for upward mobility. Dolores and Matilda,... (full context)

...Watts at Grace’s grave. Standing next to him, she asked him if his wife loved Great Expectations as much as he did. To her surprise, he said that she did not. In... (full context)

...was, Mr. Watts told them his name was Pip, roughly quoting the first line of Great Expectations : “My Christian name is Philip, but my infant tongue could make of it nothing... (full context)

...why her teacher had decided to call himself Pip. Now he could blend parts of Great Expectations with elements of his own life, moving easily between fiction and reality. For six nights,... (full context)

...school in Townsville, Australia. On her second day, she went to the library and found Great Expectations . When she sat down to read it, she realized with a shock that Mr.... (full context)

Even though Matilda says she never pushes Great Expectations on anybody, she admits that it was a useful tool when she taught as a... (full context)

...us kids saw in the classroom?” she muses. Was he a man truly obsessed with Great Expectations , or was he a man “left with only a morsel who will claim it... (full context)

...to look at “all the fragments of life that had gone into the making of Great Expectations .” She quickly found herself disappointed, though, upon learning that Dickens—despite his compassion for orphans—was... (full context) 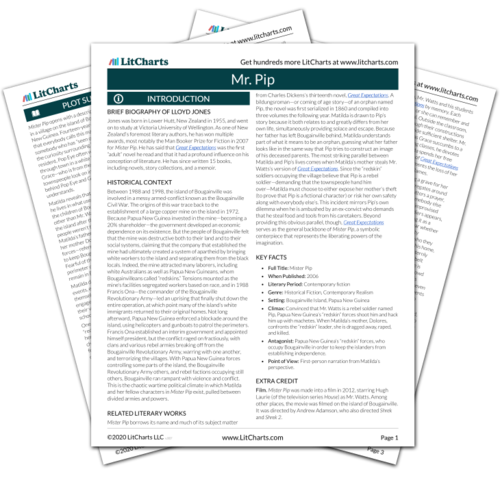 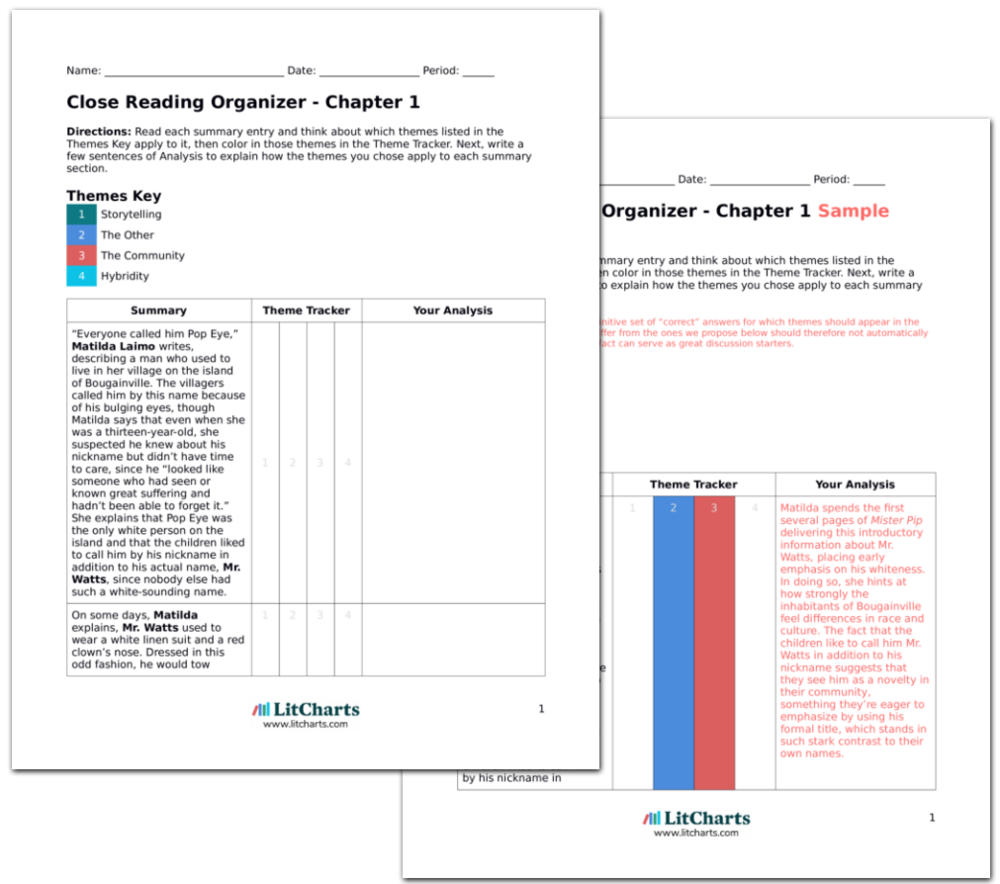