Get LitCharts A+
LitCharts assigns a color and icon to each theme in Mrs Dalloway, which you can use to track the themes throughout the work.

Though much of the novel’s action consists of preparations for a seemingly frivolous party, death is a constant undercurrent to the characters’ thoughts and actions. The obvious example of this is Septimus, who suffers from mental illness and ends up killing himself. In his inner dialogue Septimus sees himself as a godlike figure who has gone from “life to death,” and his situation as a former soldier shows how the death and violence of World War I have corrupted his mind. Peter Walsh fears growing old and dying, and so tries to pretend he is young and invincible by living in fantasies and pursuing younger women. Clarissa is also preoccupied with death even as she goes about the business of enjoying life, making small talk, and throwing parties. From the start she feels the danger of living even one day, and repeatedly quotes from Shakespeare’s play Cymbeline, a passage about the comfort of death: “Fear no more the heat o’ the sun / Nor the furious winter’s rages.” In the parallel characters of Septimus and Clarissa, Woolf shows two ways of dealing with the terror of living one day – Clarissa affirms life by throwing a party, while Septimus offers his suicide as an act of defiance and communication. These two characters never meet, but when Clarissa hears about Septimus’s suicide she feels that she understands him.

The ThemeTracker below shows where, and to what degree, the theme of Death appears in each section of Mrs Dalloway. Click or tap on any chapter to read its Summary & Analysis.
How often theme appears:
section length:
Section
Section 1
1
Section 2
2
Section 3
3
Section 4
4
Section 5
5
Section 6
6
Section 7
7
Section 8
8
Section 9
9
Get the entire Mrs Dalloway LitChart as a printable PDF.
"My students can't get enough of your charts and their results have gone through the roof." -Graham S.
Download 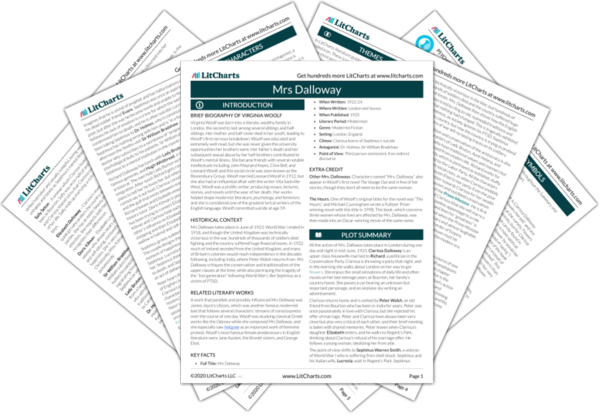 Below you will find the important quotes in Mrs Dalloway related to the theme of Death.
Section 1 Quotes

She had a perpetual sense, as she watched the taxi cabs, of being out, out far out to sea and alone; she always had the feeling that it was very, very dangerous to live even one day. Not that she thought herself clever, or much out of the ordinary.

But every one remembered; what she loved was this, here, now, in front of her; the fat lady in the cab. Did it matter then, she asked herself, walking towards Bond Street, did it matter that she must inevitably cease completely; all this must go on without her; did she resent it; or did it not become consoling to believe that death ended absolutely?

Unlock with LitCharts A+
Section 3 Quotes

But she could remember going cold with excitement, and doing her hair in a kind of ecstasy… and going downstairs, and feeling as she crossed the hall “if it were now to die ‘twere now to be most happy.” That was the feeling – Othello’s feeling, and she felt it, she was convinced, as strongly as Shakespeare meant Othello to feel it, all because she was coming down to dinner in a white frock to meet Sally Seton!

Unlock with LitCharts A+
Section 7 Quotes

All the same, that one day should follow another; Wednesday, Thursday, Friday, Saturday; that one should wake up in the morning; see the sky; walk in the park; meet Hugh Whitbread; then suddenly in came Peter; then these roses; it was enough. After that, how unbelievable death was! – that it must end; and no one in the whole world would know how she had loved it all…

Lady Bradshaw (poor goose – one didn’t dislike her) murmured how, “just as we were starting, my husband was called up on the telephone, a very sad case. A young man (that is what Sir William is telling Mr. Dalloway) had killed himself. He had been in the army.” Oh! thought Clarissa, in the middle of my party, here’s death, she thought.

But that young man had killed himself.
Somehow it was her disaster – her disgrace.

…and the words came to her, Fear no more the heat of the sun. She must go back to them. But what an extraordinary night! She felt somehow very like him – the young man who had killed himself. She felt glad that he had done it; thrown it away. The clock was striking. The leaden circles dissolved in the air. He made her feel the beauty; made her feel the fun. But she must go back. She must assemble. She must find Sally and Peter. And she came in from the little room.