Download this LitChart! (PDF)
Teachers and parents! Struggling with distance learning? Our Teacher Edition on Mrs. Sen’s can help.

Welcome to the LitCharts study guide on Jhumpa Lahiri's Mrs. Sen’s. Created by the original team behind SparkNotes, LitCharts are the world's best literature guides.

A concise biography of Jhumpa Lahiri plus historical and literary context for Mrs. Sen’s.

A quick-reference summary: Mrs. Sen’s on a single page.

In-depth summary and analysis of every of Mrs. Sen’s. Visual theme-tracking, too.

Explanations of Mrs. Sen’s's symbols, and tracking of where they appear.

An interactive data visualization of Mrs. Sen’s's plot and themes.

Lahiri was born in London, England to Bengali parents, but her family moved to the United States when she was young and settled in Kingstown, Rhode Island. She used her family nickname, Jhumpa, at school because it was easier for her teachers to pronounce. Lahiri received a BA in English literature from Barnard College in 1989 and went on to earn three master’s degrees and a doctorate from Boston University. While in graduate school in the 1990s, she began to write short stories, some of which were published in her debut collection Interpreter of Maladies (which contains “Mrs. Sen’s”) in 1999. The collection won the Pulitzer Prize in 2000. Lahiri went on to publish the novel The Namesake (2006), the short story collection Unaccustomed Earth (2008), and the novel The Lowland (2013), which was nominated for both the National Book Award and the Man Booker Prize. Her writing tends to focus on the experiences of Indian American immigrants. Lahiri is currently the director of Princeton University’s Program in Creative Writing.
Get the entire Mrs. Sen’s LitChart as a printable PDF.
"My students can't get enough of your charts and their results have gone through the roof." -Graham S.
Download 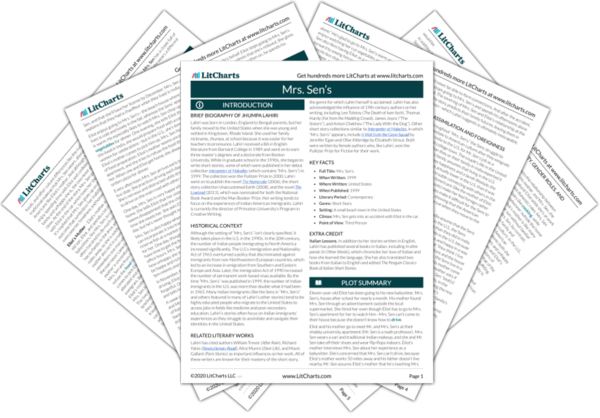 Although the setting of “Mrs. Sen’s” isn’t clearly specified, it likely takes place in the U.S. in the 1990s. In the 20th century, the number of Indian people immigrating to North America increased significantly. The U.S.’s Immigration and Nationality Act of 1965 overturned a policy that discriminated against immigrants from non-Northwestern European countries, which led to an increase in emigration from Southern and Eastern Europe and Asia. Later, the Immigration Act of 1990 increased the number of permanent work-based visas available. By the time “Mrs. Sen’s” was published in 1999, the number of Indian immigrants in the U.S. was more than double what it had been in 1965. Many Indian immigrants (like the Sens in “Mrs. Sen’s” and others featured in many of Lahiri’s other stories) tend to be highly educated people who migrate to the United States to access jobs in fields like medicine and post-secondary education. Lahiri’s stories often focus on Indian immigrants’ experiences as they struggle to assimilate and navigate their identities in the United States.

Other Books Related to Mrs. Sen’s

Lahiri has cited authors William Trevor (After Rain), Richard Yates (Revolutionary Road), Alice Munro (Dear Life), and Mavis Gallant (Paris Stories) as important influences on her work. All of these writers are known for their mastery of the short story, the genre for which Lahiri herself is acclaimed. Lahiri has also acknowledged the influence of 19th-century authors on her writing, including Leo Tolstoy (The Death of Ivan Ilych), Thomas Hardy (Far from the Madding Crowd), James Joyce (“The Sisters”), and Anton Chekhov (“The Lady With the Dog”). Other short story collections similar to Interpreter of Maladies, in which “Mrs. Sen’s” appears, include A Visit from the Goon Squad by Jennifer Egan and Olive Kitteridge by Elizabeth Strout. Both were written by female authors who, like Lahiri, won the Pulitzer Prize for Fiction for their work.
Key Facts about Mrs. Sen’s

Italian Lessons. In addition to her stories written in English, Lahiri has published several books in Italian, including In altre parole (In Other Words), which chronicles her love of Italian and how she learned the language. She has also translated two books from Italian to English and edited The Penguin Classics Book of Italian Short Stories. 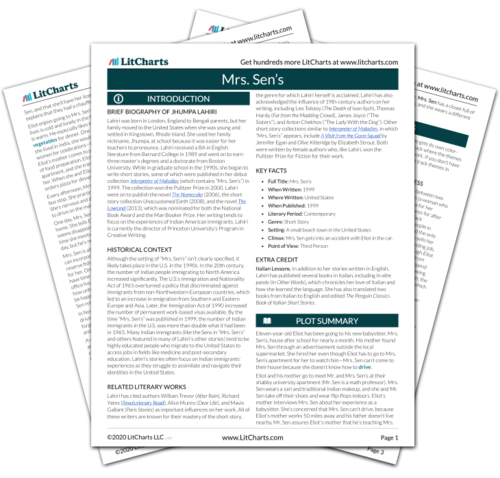 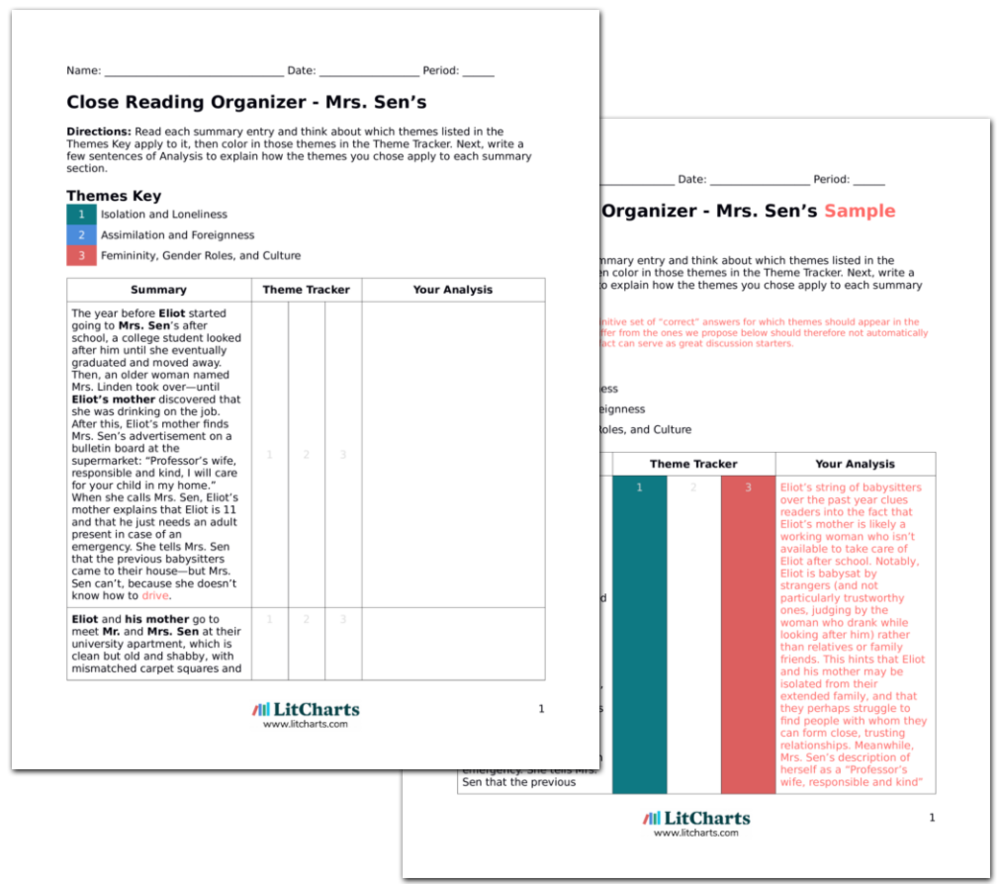