Download this LitChart! (PDF)
Teachers and parents! Struggling with distance learning? Our Teacher Edition on My Brilliant Friend can help.

Welcome to the LitCharts study guide on Elena Ferrante's My Brilliant Friend. Created by the original team behind SparkNotes, LitCharts are the world's best literature guides.

A concise biography of Elena Ferrante plus historical and literary context for My Brilliant Friend.

A quick-reference summary: My Brilliant Friend on a single page.

In-depth summary and analysis of every chapter of My Brilliant Friend. Visual theme-tracking, too.

Explanations, analysis, and visualizations of My Brilliant Friend's themes.

Description, analysis, and timelines for My Brilliant Friend's characters.

Description, analysis, and timelines for My Brilliant Friend's terms.

Explanations of My Brilliant Friend's symbols, and tracking of where they appear.

An interactive data visualization of My Brilliant Friend's plot and themes.

Elena Ferrante is a pseudonymous Italian author whose bestselling books include the popular Neapolitan Novels: 2011’s My Brilliant Friend, 2012’s The Story of a New Name, 2013’s Those Who Leave and Those Who Stay, and 2014’s The Story of the Lost Child. Ferrante’s novels have received recognition from the Man Booker Prize and the Independent Publisher Book Awards, and Ferrante herself has been listed as one of TIME magazine’s 100 most influential people. Ferrante’s decision to publish her life’s work under a pseudonym has left many readers itching for answers as to her “true” identity—but many others insist that a woman publishing on her own terms heralds a new era in novel-writing and a new way for female writers to achieve recognition. In 2016, the Italian journalist Claudio Gatti published an article which purported to reveal the identity of the mysterious Ferrante—the article was controversial in nature and many readers denounced Gatti’s attempt to unmask the novelist. Elena Ferrante’s other novels include The Days of Abandonment and The Lost Daughter. Her work has been widely adapted for stage and screen; her 1992 novel Troubling Love was adapted into 1995 film called Nasty Love, while the Neapolitan Novels are currently being adapted into a sprawling 32-part television series for HBO. While little is known of Ferrante’s biography, her work revolves around themes of female friendship, love and infidelity, fractured communities, and the unhappy, often transactional nature of relationships between men and women.
Get the entire My Brilliant Friend LitChart as a printable PDF.
"My students can't get enough of your charts and their results have gone through the roof." -Graham S.
Download 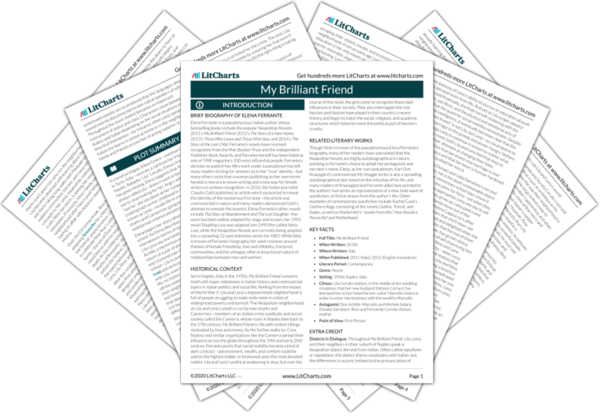 Historical Context of My Brilliant Friend

Set in Naples, Italy in the 1950s, My Brilliant Friend concerns itself with major milestones in Italian history and controversial topics in Italian politics and social life. Reeling from the impact of World War II, Lila and Lenù’s impoverished neighborhood is full of people struggling to make ends meet in a time of widespread poverty and turmoil. The Neapolitan neighborhood of Lila and Lenù’s youth is run by loan sharks and Camorrists—members of an Italian crime syndicate and secret society called the Camorra, whose roots in Naples date back to the 17th century. My Brilliant Friend is rife with violent killings motivated by love and money. As the Sicilian mafia (or Cosa Nostra) and similar organizations like the Camorra spread their influence across the globe throughout the 19th and early 20th century, Ferrante posits that social mobility became a kind of dark contract—advancement, wealth, and comfort could be sold to the highest bidder or bestowed upon the most devoted soldier. Lila and Lenù’s political awakening is slow, but over the course of the novel, the girls come to recognize these dark influences in their society. They also interrogate the role fascism and Nazism have played in their country’s recent history and begin to indict the social, religious, and academic structures which failed to resist the political pull of fascism’s cruelty.

Other Books Related to My Brilliant Friend

Though little is known of the pseudonymous Elena Ferrante’s biography, many of her readers have speculated that the Neapolitan Novels are highly autobiographical in nature, pointing to Ferrante’s choice to adopt her protagonist and narrator’s name, Elena, as her own pseudonym. Karl Ove Knausgård’s controversial My Struggle series is also a sprawling autobiographical epic based on the minutiae of his life, and many readers of Knausgård and Ferrante alike have pointed to the authors’ two series as representative of a new, bold wave of autofiction, or fiction drawn from the author’s life. Other examples of contemporary autofiction include Rachel Cusk’s Outline trilogy, consisting of the novels Outline, Transit, and Kudos, as well as Sheila Heti’s “novels from life,” How Should a Person Be? and Motherhood.
Key Facts about My Brilliant Friend

Extra Credit for My Brilliant Friend

Dialects in Dialogue. Throughout My Brilliant Friend, Lila, Lenù, and their neighbors in their suburb of Naples speak a Neapolitan dialect derived from Italian. Often called napulitano or napoletano, this dialect shares vocabulary with Italian, but the differences in accent (related to the pronunciation of unstressed vowels) are so profound that the languages often sound entirely disconnected to non-native speakers of either. Throughout the novel, dialect becomes an important instrument of status and class. Characters move between dialect and Italian depending on the social situations in which they find themselves—for instance, when Lenù speaks the Italian she learns in school at home or in the neighborhood, her family and friends accuse her of acting superior or unnatural. 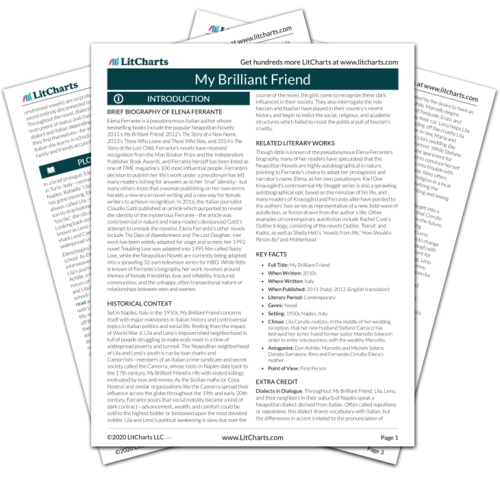 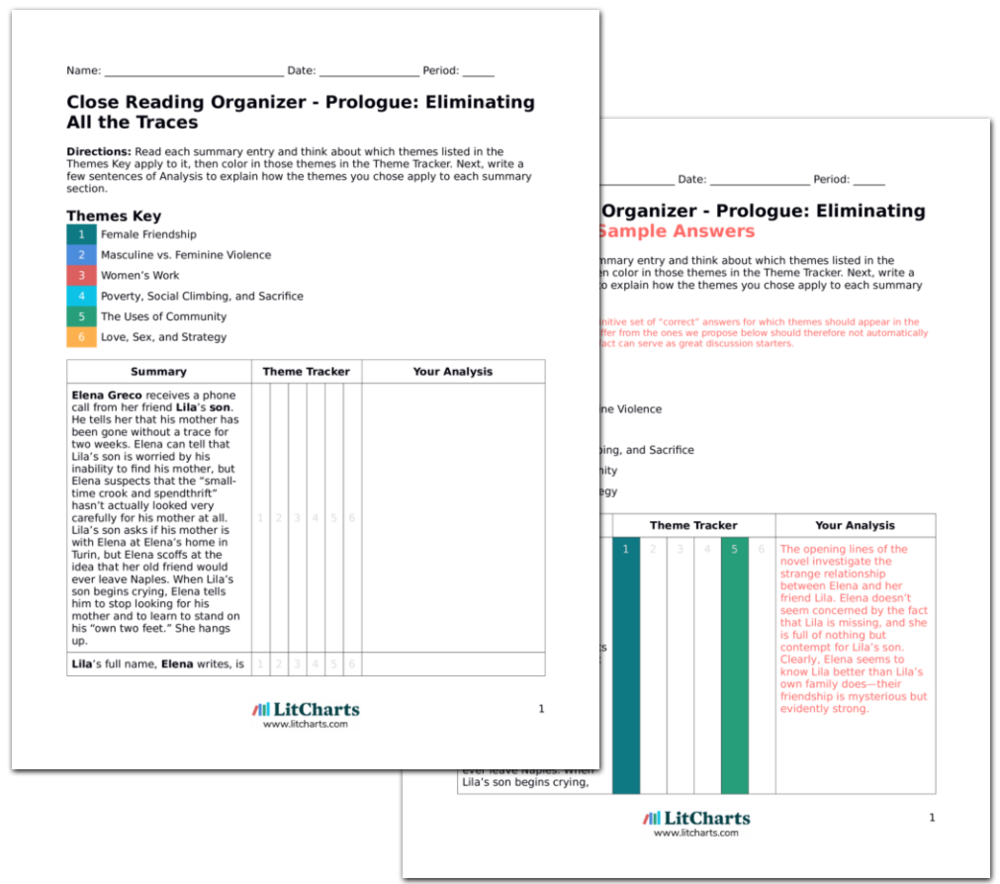