Edith Hamilton’s Mythology is like a huge study guide itself, as it overviews the principle Greek and Roman myths and briefly delves into Norse mythology. The book holds only a loose chronological order, as the mythological world is so huge and entangled that Hamilton must often reference characters and stories that are explained much earlier or later. In her introduction, she gives her reason for studying these myths, as she sees them as precursors to Western thought and useful to modern Americans.

Hamilton then introduces the major Greek gods, who live on Mount Olympus: Zeus, the chief and god of thunder and sky, Hera, his sister and jealous wife, his fierce, independent daughters Athena and Artemis, his sons cruel Ares and poetic, prophetic Apollo, his brothers, Poseidon the sea god and Hades the god of the dead, Hestia, his sister and the protector of the hearth, the clever messenger Hermes, the craftsman Hephaestus, and Aphrodite, goddess of love and beauty. Other important gods are Demeter, goddess of corn, and Dionysus, the god of wine, both of whom live on earth. Lesser gods and supernatural creatures include Eros, nymphs of all kinds, and personifications of abstract concepts like Justice and Memory.

The Greek creation story begins with only Chaos, Night, and Death. Next comes Love, and with it Heaven and Earth, and then monsters and the godlike Titans. The gods, who are children of the Titan Cronus, overthrow their father (led by Zeus) and rule the universe. They then create humans, who populate the earth along with other supernatural creatures. Hades is the land of the dead.

The stories begin to multiply and expand as the gods, especially the lecherous Zeus, copulate with humans and give birth to both heroes and tales of tragic love. Hamilton begins with early heroes like the Titan Prometheus, and then famous mortal heroes, which she describes in depth, like Theseus, Hercules, Achilles, Odysseus, and Aeneas. She groups the short biographies around the Trojan War, a mythological battle that involves many of the most famous heroes and is immortalized in Homer’s epics.

The stories of heroes often explain the founding of cities or bloodlines (like Aeneas, the mythological forefather of the Romans), but other myths explain natural phenomena like the constellations or the origins of flowers, while others serve no purpose other than pure entertainment. The flower myths usually involve beautiful youths dying tragically, and Hamilton sees these as poeticized versions of early stories of human sacrifice. Throughout the book she traces threads of primitive barbarism – like cannibalism and human sacrifice – along with the more “civilized” ideals that gradually replace them.

Later in the book Hamilton describes the complex, tragic stories of the late Greek playwrights. These myths, including famously tragic heroes like Oedipus and Orestes, question the power of fate and the ability of mortals to have free will even in the face of the gods’ prophecies. They also examine situations where Greek ideas of morality and justice are put at odds with each other, as with Orestes, who is caught between avenging his father and sparing his mother. These tragedies are connected to multi-generational families, where the sins of the parents are revisited or punished by the children, and bloodshed always leads to more bloodshed.

In the final section, Hamilton briefly discusses Norse mythology, as she sees this as another important influence on modern Western thought. Hardly any of the Norse tales have survived, and they lack any great epic poets like Homer to consolidate and empower the myths, though they are rich with tragic material. The Norse worldview is much more bleak than that of the Greeks and Romans, as all the gods and mortals are doomed to die in Ragnarok, the battle at the end of the world when evil will be victorious. Hamilton discusses some of the most famous Norse gods and heroes, and also explains the Norse idea of heroism, which was more extreme than that of the Greeks – because the Norsemen felt that tragedy was inevitable, they valued a heroic death over all else. 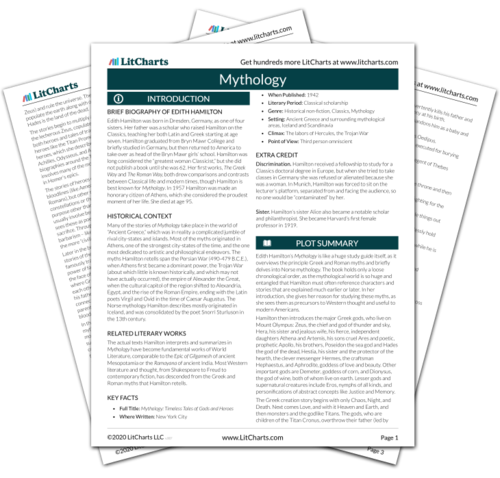 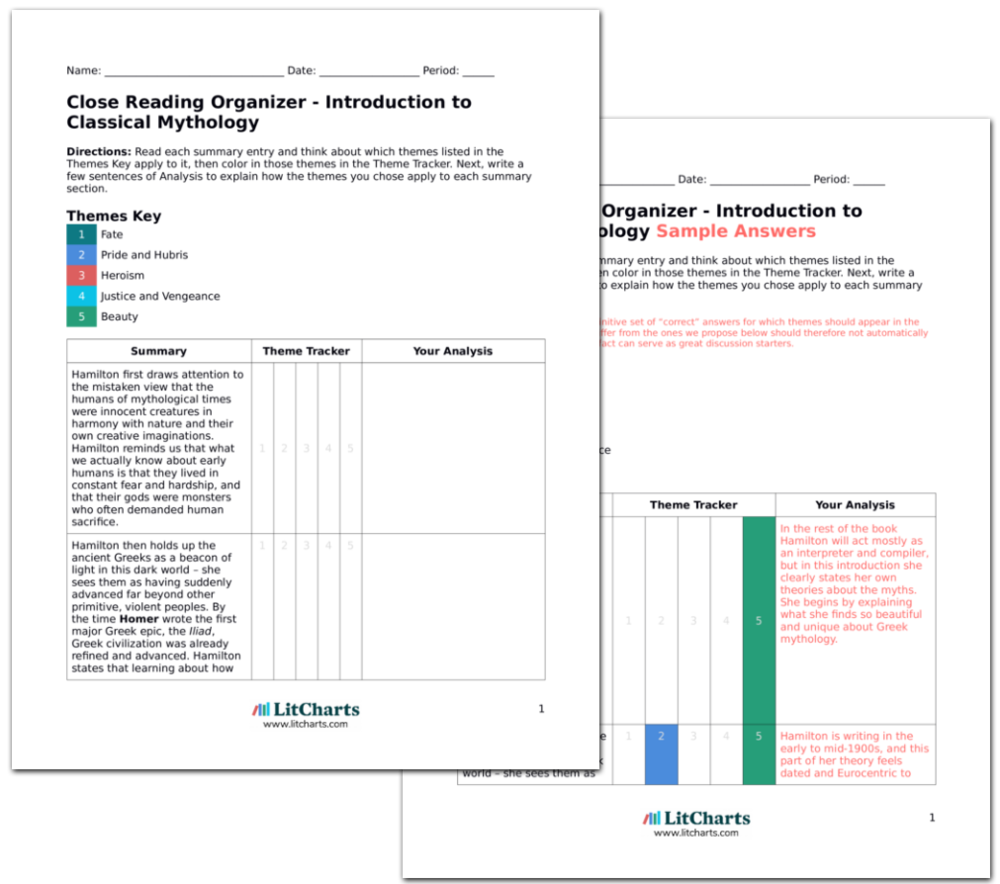