Get LitCharts A+
LitCharts assigns a color and icon to each theme in Nicomachean Ethics, which you can use to track the themes throughout the work.

Because Nicomachean Ethics is the earliest systematic treatise on ethics, it’s not surprising that it contains extensive discussion of practical virtues and their concrete application in the everyday world (that is, political science). What’s more surprising is Aristotle’s digression near the end of the work, in which he elevates the life of contemplative study above even political science. He soon concludes, however, that the study of legislation, even if second best, is more urgent than philosophical contemplation. This isn’t a contradiction, but an acknowledgement that political life doesn’t allow for much contemplation, and that the necessity of working for the good of one’s community most often overshadows the contemplative life. By structuring his argument in this way, Aristotle demonstrates that, while philosophy offers complete happiness for those already wise, political life offers the more realistic avenue for the training of the masses in virtue, and thus it’s the more vital pursuit.

In Book X, however—near the conclusion of Nicomachean Ethics—Aristotle seems to favor the abstract contemplative life above the concrete political life. The philosophical life—that devoted to study (theoria, contemplation)—is best. Aristotle says that study or contemplation is the very best activity, so complete happiness is found in study: “If happiness is activity in accord with virtue, it is reasonable for it to accord with the supreme virtue, which will be the virtue of the best thing. The best [thing] is understanding […] Hence complete happiness will be its activity in accord with its proper virtue; and we have said that this activity is the activity of study.” The life of study is also superior because it is in accordance with the life of the gods. “For someone will live [this life] not insofar as he is a human being, but insofar as he has some divine element in him […] as far as we can, we ought to be pro-immortal, and go to all lengths to live a life in accord with our supreme element […] The human activity that is most akin to the gods’ activity will, more than any other, have the character of happiness.” Aristotle makes the point that the gods are not concerned about the practical application of virtue in earthly life, but are free to engage in endless contemplation of the good. As far as they are able, human beings—at least those who’ve already attained wisdom—should strive for this kind of life, too.

Aristotle then makes another shift and ends his discussion, and the entire work, with an appeal for the importance of moral education and laws. He transitions directly from the discussion of the godlike, contemplative life to the earthly matter of moral instruction and enforcement. He explains that arguments in themselves aren’t enough to make most people act virtuously. Moreover, people aren’t receptive to ethical argument unless they’ve been trained since their youth to develop a taste for virtue: “the soul of the student needs to have been prepared by habits for enjoying and hating finely, like ground that is to nourish seed.” The character, that is, must be made “suitable for virtue.” Such preparation occurs through the laws under which one is brought up from one’s youth. Legislators must “urge people toward virtue and exhort them to aim at the fine—on the assumption that anyone whose good habits have prepared him decently will listen to them—but must impose corrective treatments and penalties” on those who don’t listen or haven’t been adequately prepared. Such coercion is appropriate because law is “reason that proceeds from a sort of prudence and understanding”; in other words, it’s a form of virtue in itself.

Therefore, it’s necessary that “the community [attend] to upbringing,” and to this end, the study of legislative science and political systems is crucial. This study of the “philosophy of human affairs” allows people to grasp “what sort of political system is best; how each […] should be organized […] and what habits and laws it should follow.” Overall, then, Aristotle frames the entire treatise with an argument for the importance of the political life—but whereas his opening discussion introduces political science as the highest science, his concluding discussion describes it as a concession to the needs of the majority of society; philosophy is the most complete happiness, but it’s attainable only to a few and must be brought “down to earth” through remedial ethical training and legislation.

Aristotle’s digression on contemplation underlines his belief that all of the ethics he’s just discussed at length are unattainable, unless people live in communities that provide a suitable environment for the attainment of virtue. So even if the very best life isn’t political but contemplative, communities need their wisest minds to pursue the political life in order to promote community well-being. It’s also worth remembering that this work was intended to be a prologue to Aristotle’s more specifically political writings, so to fully understand his views, it needs to be read in conversation with the rest of his work.

The Political Life vs. the Contemplative Life ThemeTracker

The ThemeTracker below shows where, and to what degree, the theme of The Political Life vs. the Contemplative Life appears in each book of Nicomachean Ethics. Click or tap on any chapter to read its Summary & Analysis.
How often theme appears:
book length:
Book
Book 1
1
Book 2
2
Book 3
3
Book 4
4
Book 5
5
Book 6
6
Book 7
7
Book 8
8
Book 9
9
Book 10
10
Get the entire Nicomachean Ethics LitChart as a printable PDF.
"My students can't get enough of your charts and their results have gone through the roof." -Graham S.
Download 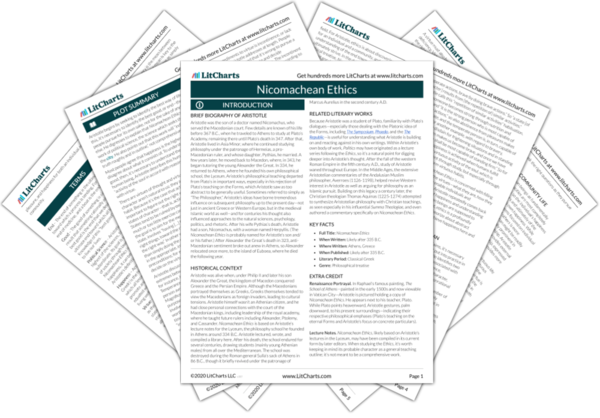 The Political Life vs. the Contemplative Life Quotes in Nicomachean Ethics

Below you will find the important quotes in Nicomachean Ethics related to the theme of The Political Life vs. the Contemplative Life.
Book 1 Quotes

And so, since this is our subject and these are our premises, we shall be satisfied to indicate the truth roughly and in outline; since our subject and our premises are things that hold good usually, we shall be satisfied to draw conclusions of the same sort. Each of our claims, then, ought to be accepted in the same way. For the educated person seeks exactness in each area to the extent that the nature of the subject allows; for apparently it is just as mistaken to demand demonstrations from a rhetorician as to accept [merely] persuasive arguments from a mathematician. Further, each person judges rightly what he knows, and is a good judge about that; hence the good judge in a given area is the person educated in that area, and the unqualifiedly good judge is the person educated in every area. This is why a youth is not a suitable student of political science; for he lacks experience of the actions in life, which are the subject and premises of our arguments.

Presumably, though, we had better examine the universal good, and puzzle out what is meant in speaking of it. This sort of inquiry is, to be sure, unwelcome to us, because those who introduced the Forms were friends of ours; still, it presumably seems better, indeed only right, to destroy even what is close to us if that is the way to preserve truth. We must especially do this as philosophers, for though we love both the truth and our friends, reverence is due to the truth first.

Unlock with LitCharts A+
Book 5 Quotes

Now the law instructs us to do the actions of a brave person—for instance, not to leave the battle-line, or to flee, or to throw away our weapons; of a temperate person—not to commit adultery or wanton aggression; of a mild person—not to strike or revile another; and similarly requires actions in accord with the other virtues, and prohibits actions in accord with the vices. The correctly established law does this correctly, and the less carefully framed one does this worse. […]

Moreover, friendship would seem to hold cities together, and legislators would seem to be more concerned about it than about justice. For concord would seem to be similar to friendship, and they aim at concord among all, while they try above all to expel civil conflict, which is enmity. Further, if people are friends, they have no need of justice, but if they are just they need friendship in addition; and the justice that is most just seems to belong to friendship.

Unlock with LitCharts A+
Book 10 Quotes

Such a life would be superior to the human level. For someone will live it not insofar as he is a human being, but insofar as he has some divine element in him. And the activity of this divine element is as much superior to the activity in accord with the rest of virtue as this element is superior to the compound. Hence if understanding is something divine in comparison with a human being, so also will the life in accord with understanding be divine in comparison with human life. We ought not to follow the makers of proverbs and “Think human, since you are human,” or “Think mortal, since you are mortal.” Rather, as far as we can, we ought to be pro-immortal, and go to all lengths to live a life in accord with our supreme element; for however much this element may lack in bulk, by much more it surpasses everything in power and value.

Now some think it is nature that makes people good; some think it is habit; some that it is teaching. The [contribution] of nature clearly is not up to us, but results from some divine cause in those who have it, who are the truly fortunate ones. Arguments and teaching surely do not prevail on everyone, but the soul of the student needs to have been prepared by habits for enjoying and hating finely, like ground that is to nourish seed. For someone who lives in accord with his feelings would not even listen to an argument turning him away, or comprehend it [if he did listen]; and in that state how could he be persuaded to change? And in general feelings seem to yield to force, not to argument.

Since, then, our predecessors have left the area of legislation uncharted, it is presumably better to examine it ourselves instead, and indeed to examine political systems in general, and so to complete the philosophy of human affairs, as far as we are able. First, then, let us try to review any sound remarks our predecessors have made on particular topics. Then let us study the collected political systems, to see from them what sorts of things preserve and destroy cities, and political systems of different types; and what causes some cities to conduct politics well, and some badly. For when we have studied these questions, we will perhaps grasp better what sort of political system is best; how each political system should be organized so as to be best and what habits and laws it should follow. Let us discuss this, then, starting from the beginning. 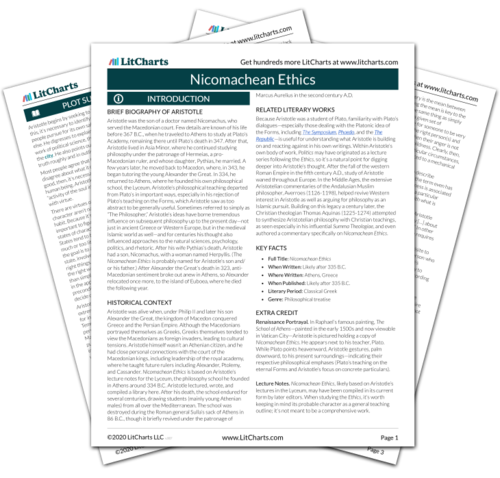 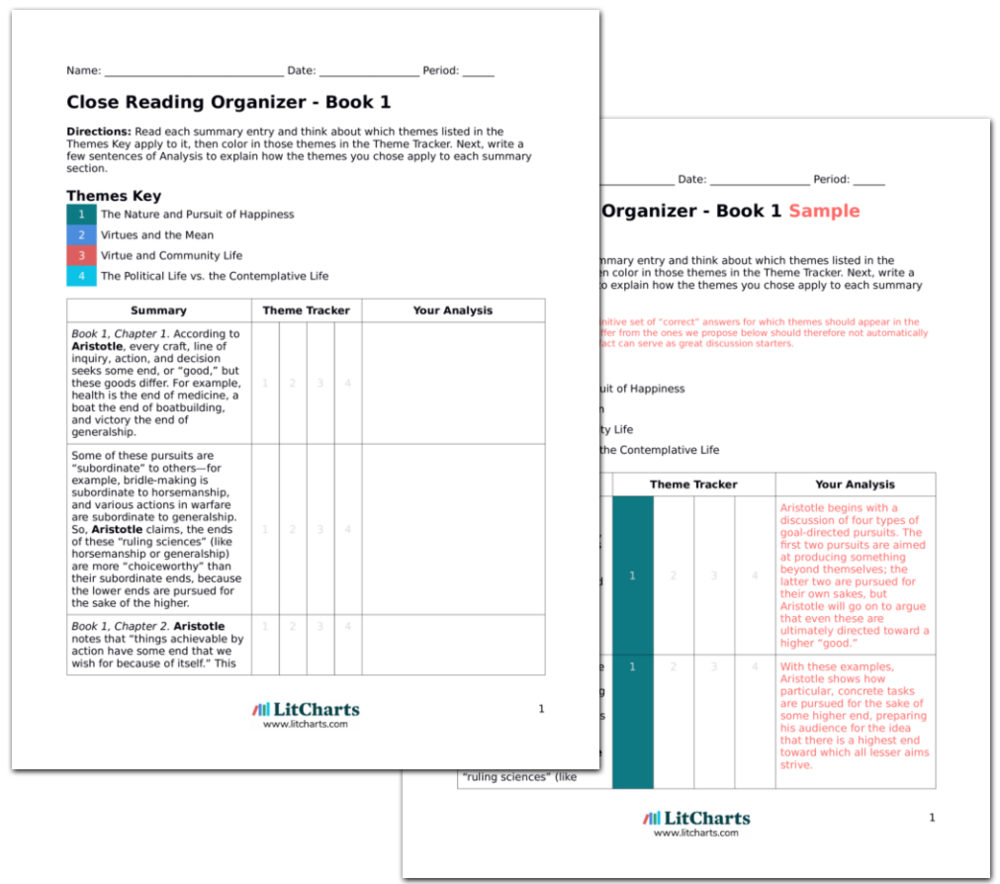