Download this LitChart! (PDF)
Teachers and parents! Struggling with distance learning? Our Teacher Edition on No Exit can help.

Welcome to the LitCharts study guide on Jean-Paul Sartre's No Exit. Created by the original team behind SparkNotes, LitCharts are the world's best literature guides.

A concise biography of Jean-Paul Sartre plus historical and literary context for No Exit.

A quick-reference summary: No Exit on a single page.

In-depth summary and analysis of every of No Exit. Visual theme-tracking, too.

Explanations, analysis, and visualizations of No Exit's themes.

No Exit's important quotes, sortable by theme, character, or .

Description, analysis, and timelines for No Exit's characters.

Explanations of No Exit's symbols, and tracking of where they appear.

An interactive data visualization of No Exit's plot and themes.

Jean-Paul Sartre was born in Paris, where he would go on to live most of his life. He studied philosophy at the École Normale Supérieure until 1929, the same year he met the existentialist feminist philosopher and his eventual lifelong partner Simone de Beauvoir. Sartre spent most of the 1930s teaching in the northern French port city of Le Havre, returned to Paris in 1937, and then was drafted into the French army at the outbreak of World War II in 1939. He served as a meteorologist in the eastern border region of Alsace (where his mother’s family had roots) but was captured and held as a prisoner of war until 1941. After returning to German-occupied Paris, he participated to a limited extent in the underground resistance to the occupation and wrote many of his best-known works, including his philosophical magnum opus Being and Nothingness, the plays No Exit and The Files, and the novel The Age of Reason. In 1946—at the apex of his fame—he quit teaching and moved back in with his mother. From this period onward, Sartre’s work and public image turned far more political and especially anti-colonial in tone. He became an avowed Marxist, although he lost sympathy for the Soviet Union after 1956, and spent much of the 1950s striving to combine his existentialism with Marxism in works like the 1957 Search for a Method and the 1960 Critique of Dialectical Reason. During Algeria’s War of Independence from France, Sartre openly supported the National Liberation Front and cultivated a friendship with the renowned psychiatrist and revolutionary Frantz Fanon. He was awarded the 1964 Nobel Prize in Literature, but he became the first recipient to turn it down, citing the Prize’s bias against intellectuals from outside Western Europe and declaring that a writer should “refuse to let himself be transformed into an institution.” He spent most of the 1960s writing a monumental biography of the 19th century French novelist Gustave Flaubert, but abruptly retired in 1971 to focus on political organizing and never finished the last volume. Around the same time, Sartre’s health began to deteriorate, worsened by his lifetime of smoking and heavy drinking. He was almost completely blind by 1973 and died of pulmonary edema in April of 1980.
Get the entire No Exit LitChart as a printable PDF.
"My students can't get enough of your charts and their results have gone through the roof." -Graham S.
Download 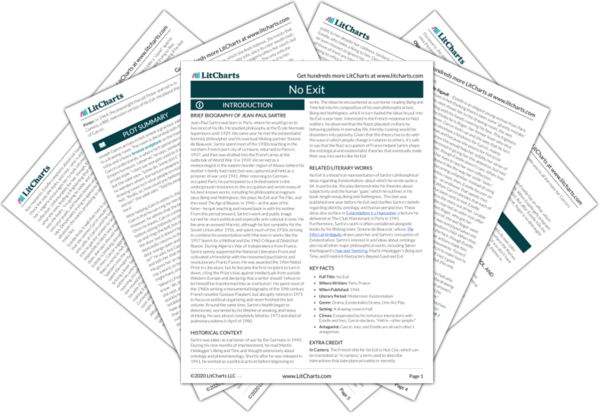 Historical Context of No Exit

Sartre was taken as a prisoner of war by the Germans in 1940. During his nine months of imprisonment, he read Martin Heidegger’s Being and Time and thought extensively about ontology and phenomenology. Shortly after he was released in 1941, he worked as a political activist before beginning to write. The ideas he encountered as a prisoner reading Being and Time fed into his composition of his own philosophical text, Being and Nothingness, which in turn fueled the ideas he put into No Exit a year later. Interested in the French response to Nazi soldiers, he observed that the Nazis placated civilians by behaving politely in everyday life, thereby coaxing would-be dissenters into passivity. Given that this theory has to do with the ways in which people change in relation to others, it’s safe to say that the Nazi occupation of France helped Sartre shape the ontological and existentialist theories that eventually made their way into works like No Exit.

Other Books Related to No Exit

No Exit is a theatrical representation of Sartre’s philosophical ideas regarding Existentialism, about which he wrote quite a lot. In particular, the play demonstrates his theories about subjectivity and the human “gaze,” which he outlines in his book-length essay Being and Nothingness. This text was published one year before No Exit and clarifies Sartre’s beliefs regarding identity, ontology, and human perspective. These ideas also surface in Existentialism Is a Humanism, a lecture he delivered at The Club Maintenant in Paris in 1945. Furthermore, Sartre’s work is often considered alongside books by his lifelong lover, Simone de Beauvoir, whose The Ethics of Ambiguity draws upon her and Sartre’s conception of Existentialism. Sartre’s interest in and ideas about ontology also recall other major philosophical works, including Søren Kierkegaard’s Fear and Trembling, Martin Heidegger’s Being and Time, and Friedrich Nietzsche’s Beyond Good and Evil.
Key Facts about No Exit

Extra Credit for No Exit

In Camera. The French title for No Exit is Huis Clos, which can be translated as “in camera,” a term used to describe interactions that take place privately or secretly.

Pinter. In 1964, the playwright Harold Pinter starred in In Camera, a BBC television version of No Exit. He played the role of Garcin. 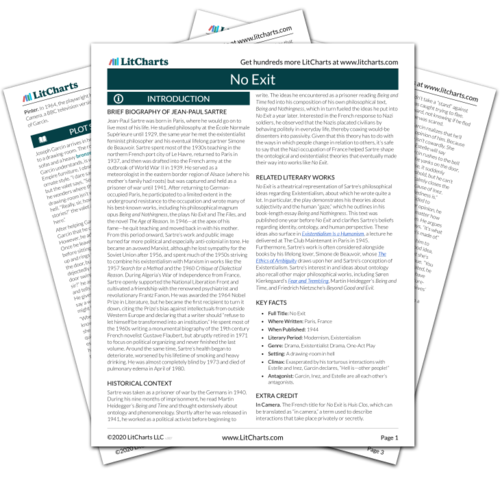 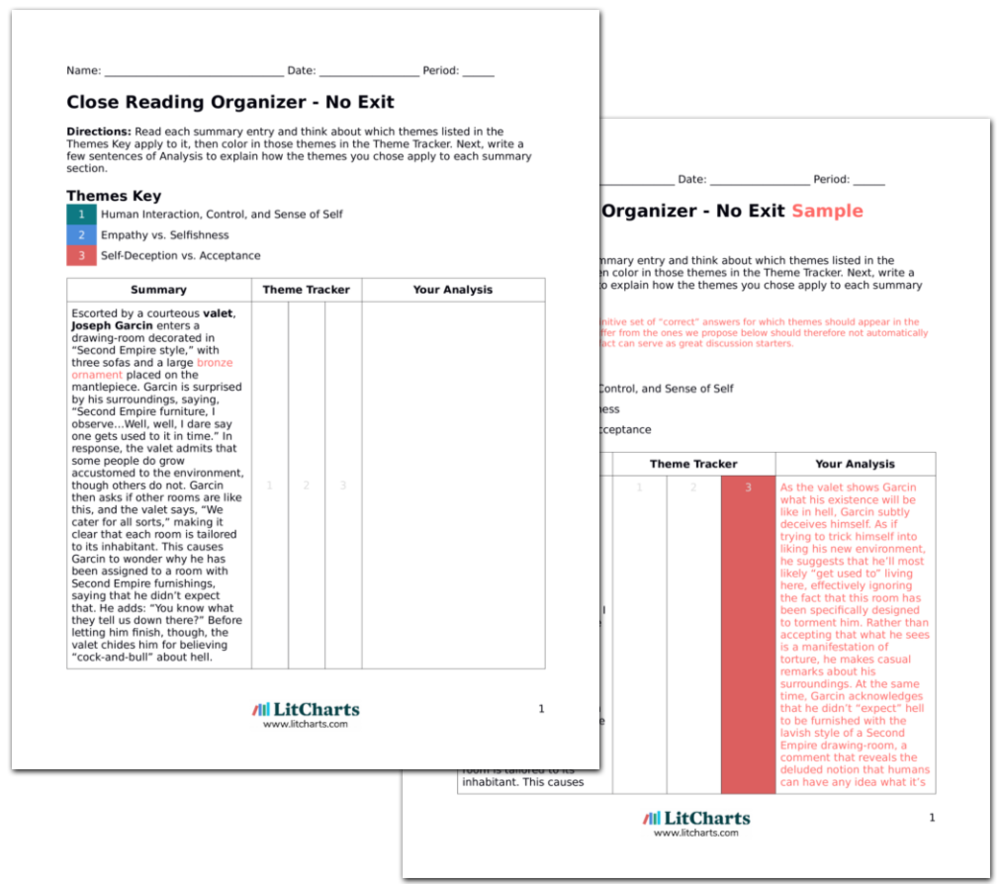