Download this LitChart! (PDF)
Teachers and parents! Struggling with distance learning? Our Teacher Edition on No Longer Human can help.

Welcome to the LitCharts study guide on Osamu Dazai's No Longer Human. Created by the original team behind SparkNotes, LitCharts are the world's best literature guides.

A concise biography of Osamu Dazai plus historical and literary context for No Longer Human.

A quick-reference summary: No Longer Human on a single page.

In-depth summary and analysis of every chapter of No Longer Human. Visual theme-tracking, too.

Explanations, analysis, and visualizations of No Longer Human's themes.

Description, analysis, and timelines for No Longer Human's characters.

Explanations of No Longer Human's symbols, and tracking of where they appear.

An interactive data visualization of No Longer Human's plot and themes.

The famous Japanese author known by the penname Osamu Dazai was born with the name Shūji Tsushima in 1909. He belonged to a large family that was wealthy and influential, having found success in moneylending. As one of the richest landowners in the Aomori Prefecture, Dazai’s father became a politician in Japan’s House of Peers, which ultimately meant he was absent for most of Dazai’s childhood—he died of lung cancer shortly before Dazai entered high school in 1923. Dazai eventually went on to study literature at Hirosaki University, where he edited and wrote for several student publications. However, he soon lost all interest in school when one of his favorite writers, Ryūnosuke Akutagawa, died by suicide in 1927. Dazai started spending his money on alcohol and sex workers, and—two years later—he tried to take his own life. He survived and was ultimately able to graduate the following year. He then went to Tokyo Imperial University to study French literature, but he was expelled for not going to class. Shortly thereafter, he tried again to die by suicide, this time attempting to drown alongside a woman he’d met at a bar. The woman died, but Dazai was rescued by a passing boat. Because his powerful family intervened on his behalf, he narrowly avoided legal repercussions for the woman’s death. In the ensuing years, Dazai wrote and published a number of short stories, experimenting with his characteristically autobiographical style. He tried to die by suicide again in the 1930s but survived once more. He became addicted to painkillers after a bout with appendicitis and, to overcome his addiction, was eventually taken to a psychiatric ward—an experience he writes about in one of his best-known novels, No Longer Human. Despite his tumultuous personal life and crushing struggle with depression, Dazai wrote many novels in the 1930s and 1940s, including what is perhaps his most famous book, The Setting Sun, in 1947. He died in a double suicide in 1948, drowning himself alongside his mistress, Tomie Yamazaki.
Get the entire No Longer Human LitChart as a printable PDF.
"My students can't get enough of your charts and their results have gone through the roof." -Graham S.
Download 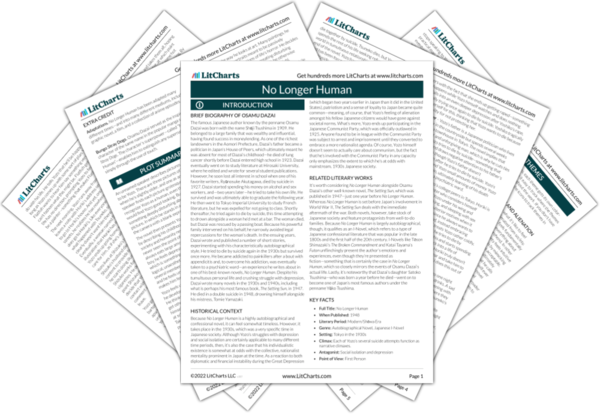 Historical Context of No Longer Human

Because No Longer Human is a highly autobiographical and confessional novel, it can feel somewhat timeless. However, it takes place in the 1930s, which was a very specific time in Japanese society. Although Yozo’s struggles with depression and social isolation are certainly applicable to many different time periods, then, it’s also the case that his individualistic existence is somewhat at odds with the collective, nationalist mentality prominent in Japan at the time. As a reaction to both diplomatic and financial instability during the Great Depression (which began two years earlier in Japan than it did in the United States), patriotism and a sense of loyalty to Japan became quite common—meaning, of course, that Yozo’s feeling of alienation amongst his fellow Japanese citizens would have gone against societal norms. What’s more, Yozo ends up participating in the Japanese Communist Party, which was officially outlawed in 1925. Anyone found to be in league with the Communist Party was subject to arrest and imprisonment until they converted to embrace a more nationalist agenda. Of course, Yozo himself doesn’t seem to actually care about communism, but the fact that he’s involved with the Communist Party in any capacity only emphasizes the extent to which he’s at odds with mainstream, 1930s Japanese society.

Other Books Related to No Longer Human

It’s worth considering No Longer Human alongside Osamu Dazai’s other well-known novel, The Setting Sun, which was published in 1947—just one year before No Longer Human. Whereas No Longer Human is set before Japan’s involvement in World War II, The Setting Sun deals with the immediate aftermath of the war. Both novels, however, take stock of Japanese society and feature protagonists from well-to-do families. Because No Longer Human is largely autobiographical, though, it qualifies as an I-Novel, which refers to a type of Japanese confessional literature that was popular in the late 1800s and the first half of the 20th century. I-Novels like Tōson Shimazaki’s The Broken Commandment and Katai Tayama’s Futon unflinchingly present the author’s emotions and experiences, even though they’re presented as fiction—something that is certainly the case in No Longer Human, which so closely mirrors the events of Osamu Dazai’s actual life. Lastly, it’s noteworthy that Dazai’s daughter Satoko Tsushima—who was born a year before he died—went on to become one of Japan’s most famous authors under the penname Yūko Tsushima.
Key Facts about No Longer Human

Extra Credit for No Longer Human

Adaptations. No Longer Human has been adapted many different times—and into many different mediums, including a graphic novel, a film, and a collection of anime episodes.

Bungo Stray Dogs. Osamu Dazai served as the inspiration for a character of the same name in the popular manga series Bungo Stray Dogs. The character’s superpower—called “No Longer Human”—enables him to extinguish any supernatural ability simply through the use of touch. 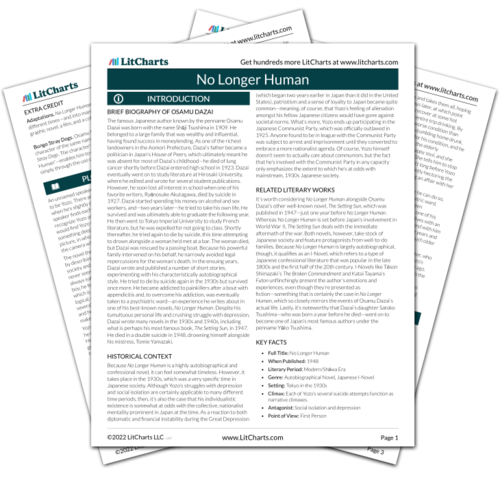 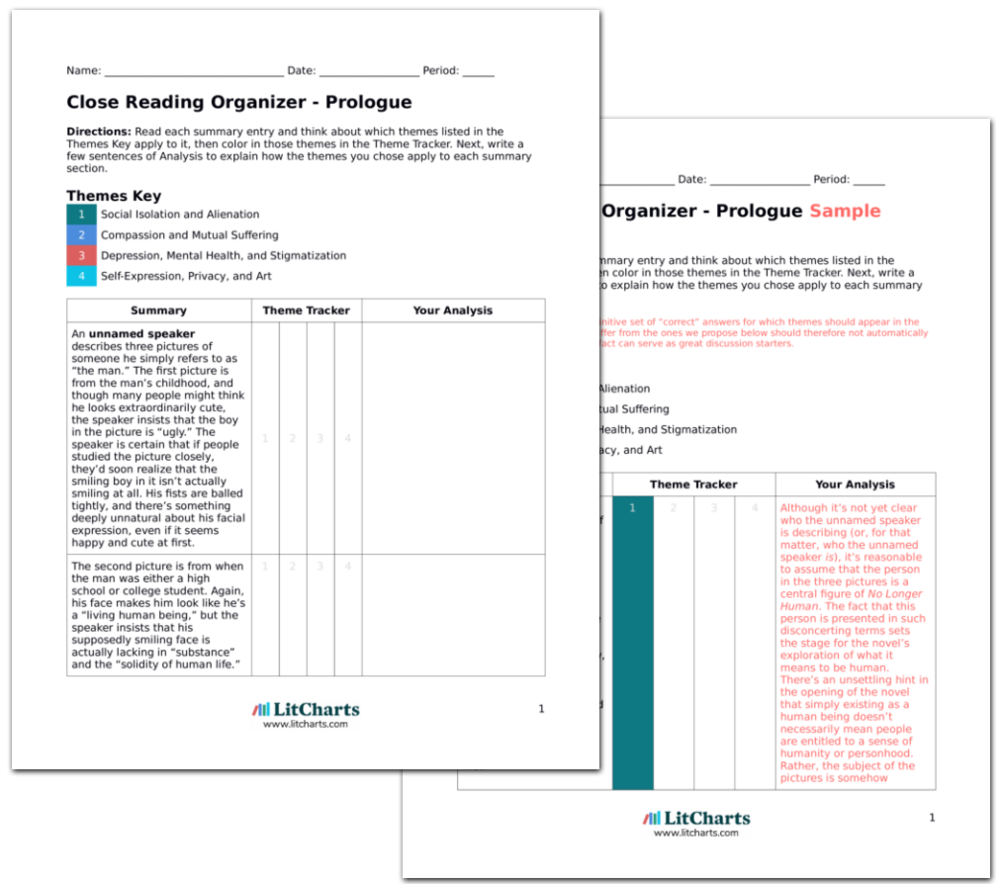