Quandongs are the fruit of a kind of sandalwood tree that grows wild in Australia. They are edible, have a distinct flavor that is tart and sour when ripe, and are used as an ingredient in “bushfood,” or traditional Aboriginal cuisine and medicine. In No Sugar, Joe gathers some quandongs to give to Mary, who finds them too sour and then starts vomiting (an early sign of her pregnancy). When Billy appears and tries to catch Joe and Mary—the couple has run away from the settlement—Joe beats him up, handcuffs him, and replaces the handcuff keys in Billy’s pockets with quandongs. Billy, humiliated, then returns to Mr. Neal and Matron Neal, who are frustrated by what has happened and especially infuriated to find only quandongs in Billy’s pockets. After Billy is sent away, the Matron tries to eat one of the fruits, but also finds it “bitterly sour.”

Through these appearances in the play, quandongs come to act as a symbol representing both the resiliency of the Aboriginal way of life and the bitter, oppressive situation that Aboriginal Australians have been placed into by white colonizers. Billy, an Aboriginal himself—but one who works as a black tracker for Neal—finds himself punished for turning against his own people, as the keys to the handcuffs with which he was supposed to arrest Joe and Mary are stolen and replaced with quandongs. The tools of white oppression are thus replaced with a reminder of Billy’s own Aboriginal origins and forsaken way of life. At the same time, the quandongs themselves are too bitter for both Mary and the Matron Neal to enjoy, suggesting the bitterness of white oppression of the Aboriginals. Mary, as an Aboriginal herself, is of course directly affected by this oppression, but the Matron too lives an unhappy life married to a man who cruelly exploits and violates the people he is supposedly “protecting.” In a wink to the play’s title, Joe also consoles Mary by saying that quandongs are “nice with sugar on ’em.” However, as the Aboriginal characters sing later in the play, there is “no sugar.” They are not accepted into white Australian society, but also can no longer enjoy the fruits of their traditional way of life, because this too has been taken from them. Any sweetness is hard to find, and most of their experience is bitter and frustrating.

Get the entire No Sugar LitChart as a printable PDF.
"My students can't get enough of your charts and their results have gone through the roof." -Graham S.
Download 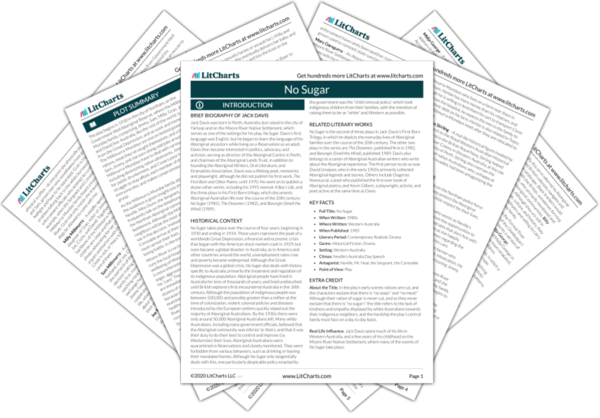 Quandongs Symbol Timeline in No Sugar

The timeline below shows where the symbol Quandongs appears in No Sugar. The colored dots and icons indicate which themes are associated with that appearance.

Mary sleeps in a clearing by the railroad tracks. Joe returns with water and quandongs. He wakes Mary. Her feet hurt, and he washes and rubs them as she tries... (full context)

...of him, but when the Matron checks his pocket for the keys she only finds quandongs. Neal calls Billy a “bloody incompetent savage.” (full context) 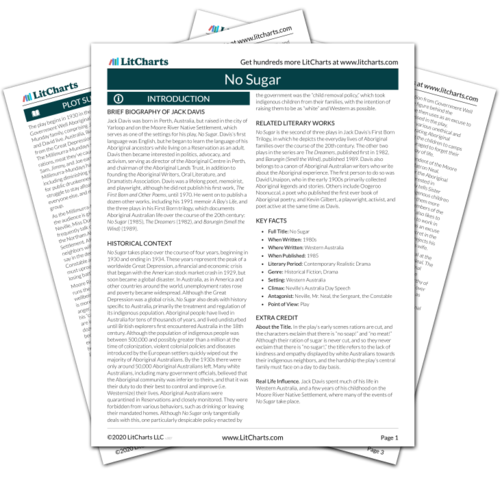 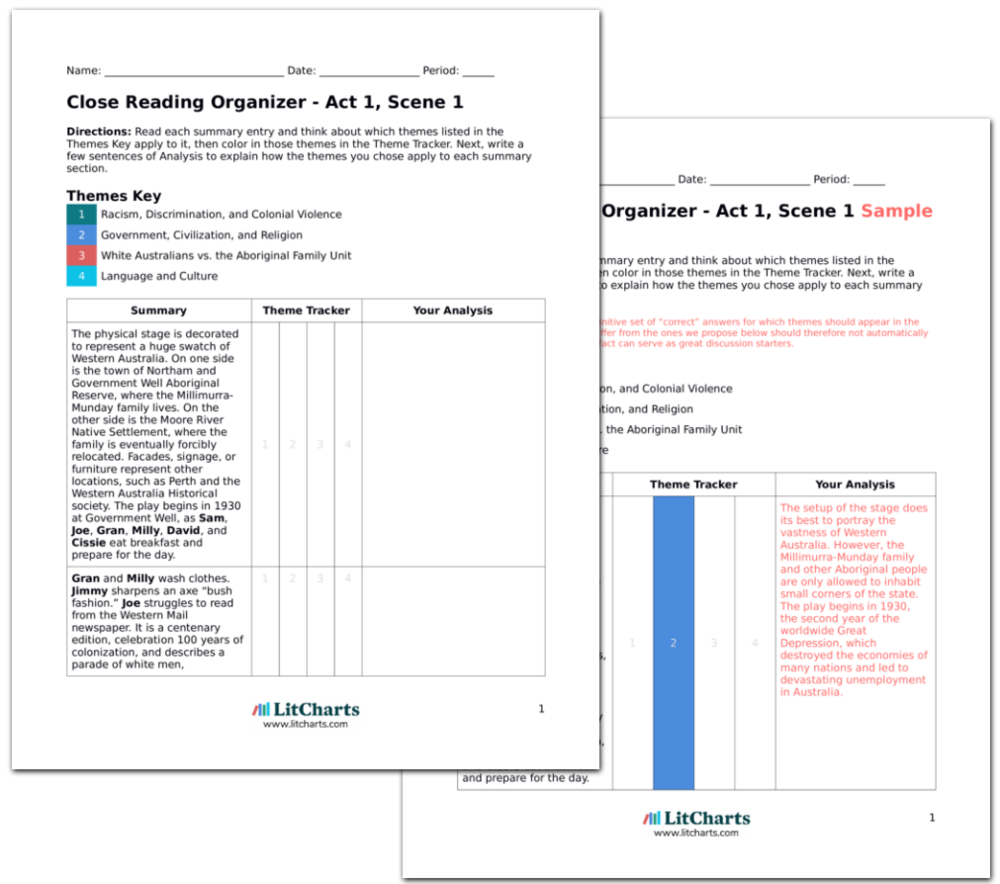