Get LitCharts A+
A wife and mother to ten children, Mrs. Morland is not very aware of the dangers of society for a young, inexperienced woman of seventeen. She allows her eldest daughter Catherine to go to Bath with Mrs. Allen, whose character makes her an inadequate chaperone, and never imagines that Catherine might fall in love while there.

The Northanger Abbey quotes below are all either spoken by Mrs. Morland or refer to Mrs. Morland. For each quote, you can also see the other characters and themes related to it (each theme is indicated by its own dot and icon, like this one:

). Note: all page numbers and citation info for the quotes below refer to the Penguin Classics edition of Northanger Abbey published in 2003.
Volume 1, Chapter 2 Quotes

When the hour of departure drew near, the maternal anxiety of Mrs. Morland will be naturally supposed to be most severe. A thousand alarming presentiments of evil to her beloved Catherine from this terrific separation must oppress her heart with sadness, and drown her in tears for the last day or two of their being together; and advice of the most important and applicable nature must of course flow from her wise lips in their parting conference in her closet. Cautions against the violence of such noblemen and baronets as delight in forcing young ladies away to some remote farm-house, must, at such a moment, relieve the fulness of her heart. Who would not think so? But Mrs. Morland knew so little of lords and baronets, that she entertained no notion of their general mischievousness, and was wholly unsuspicious of danger to her daughter from their machinations.

Without suffering any romantic alarm, in the consideration of their daughter's long and lonely journey, Mr. and Mrs. Morland could not but feel that it might have been productive of much unpleasantness to her; that it was what they could never have voluntarily suffered; and that, in forcing her on such a measure, General Tilney had acted neither honourably nor feelingly—neither as a gentleman nor as a parent. Why he had done it, what could have provoked him to such a breach of hospitality, and so suddenly turned all his partial regard for their daughter into actual ill-will, was a matter which they were at least as far from divining as Catherine herself; but it did not oppress them by any means so long; and, after a due course of useless conjecture, that, “it was a strange business, and that he must be a very strange man,” grew enough for all their indignation and wonder; though Sarah indeed still indulged in the sweets of incomprehensibility, exclaiming and conjecturing with youthful ardor. 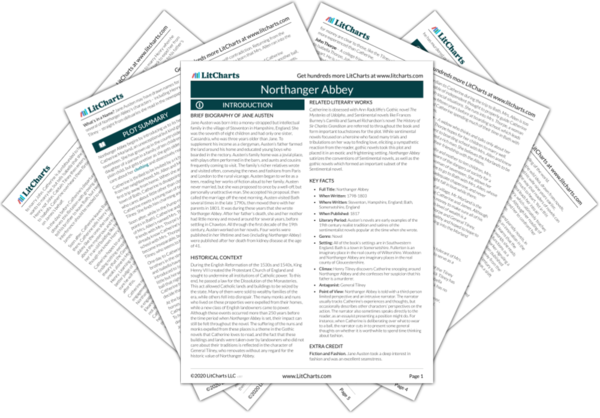 The timeline below shows where the character Mrs. Morland appears in Northanger Abbey. The colored dots and icons indicate which themes are associated with that appearance.

...expected that her mother would worry about her daughter being seduced by wicked noblemen, but Mrs. Morland is too unexperienced with the world to have this concern. And although Catherine might have... (full context)

...saying James is the most charming of men, but she worries about what Mr. and Mrs. Morland will say. Catherine begins to understand and, with a blush, asks Isabella if she is... (full context)

...General Tilney’s treatment of their daughter is ungentlemanly. The family cannot understand his behavior, but Mrs. Morland says that it is not worth understanding. She says Catherine has always been absentminded, so... (full context)

Mrs. Morland sends Catherine to bed early, but her daughter still looks pale and unhappy in the... (full context)

After hearing Catherine’s story of her time in Bath and with the Tilneys, Mrs. Morland says it has been a strange acquaintance, with such quick intimacy and such a quick... (full context)

...surprised and happy to see her and very appalled by General Tilney’s treatment of Catherine. Mrs. Morland says they are happy to have Catherine back and glad to know that she can... (full context)

On the way home, Mrs. Morland tells Catherine how unimportant it is that she has lost the friendship of the Tilneys,... (full context)

...had never been very good at sitting still or at focusing on a task, but Mrs. Morland now observes her to be more fidgety than ever before, and much sadder than she... (full context)

When Mrs. Morland returns to the room, she is surprised to find a strange young man there. Henry... (full context)

Eventually Mrs. Morland runs out of small talk and everyone falls silent. Mr. Tilney, for the first time... (full context) 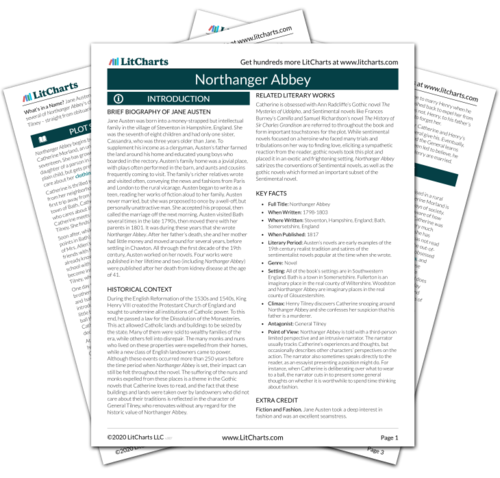 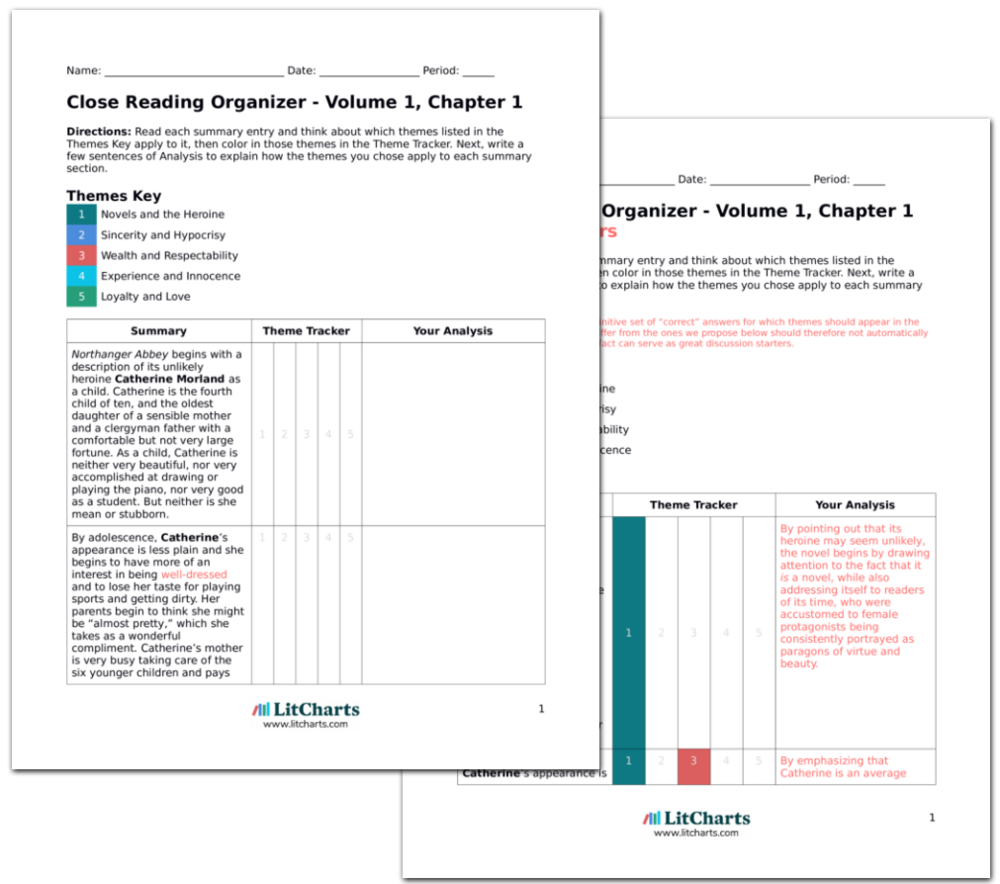