In “Old Man at the Bridge,” the narrator—a soldier in the Spanish Civil War—tries to convince an old man sitting on the side of the road to get himself to safety before the fighting arrives. While the narrator clearly worries that the old man will die if he stays there, the old man isn’t worried about his own safety; instead, he worries aloud about the animals he left behind when he fled his hometown. Both the old man and the narrator, then, are concerned with the survival of others (the old man about the animals, and the narrator about the old man). However, for both men, this concern is futile—after all, the animals have been abandoned, and the narrator walks away from the old man at the end of the story because there was “nothing to do about him.” In this way, Hemingway shows the horror of war without even depicting any bloodshed. War takes lives ravenously and senselessly, even those not directly involved in the fighting, and it leaves people devaluing life, unable to perform even the simplest acts of salvation.

From the outset, Hemingway is clear that the war—while still somewhat distant—is ominously approaching. In the opening scene, for instance, many exhausted people are fleeing across the pontoon bridge. The “carts, trucks, and men, women and children” are “stagger[ing]” and “plodd[ing] along in the ankle deep dust,” all of them “heading out of it all.” If there’s any doubt as to what they’re fleeing, the narrator quickly notes that his job is crossing the bridge to “find out to what point the enemy had advanced,” making it clear that the violence of war has not yet arrived, but it is coming. While the narrator gives no emotional commentary about this approaching violence, the atmosphere is one of anxiety and dread, and his concern for the old man—his repeated urging that the man continue on to safety—betrays that he believes the man will die if he remains there.

For the old man, however, the cost of war is not simply his life, since by the time the story begins, the war has already taken what matters most to him. When the old man tells the narrator the name of his hometown, “it gave him pleasure to mention it and he smiled.” This is the only time that the story depicts a positive emotion, and it is associated with the memory of the town the old man has since fled (presumably for good) due to artillery fire. Therefore, even this small moment of happiness is merely an indication of what the man has lost. Furthermore, when he fled his hometown, the old man had to leave behind the animals for which he had been caring: two goats, a cat, and four pairs of pigeons. It’s clear that this duty was important to him, because he was “the last one to leave” once the town was evacuated. Presumably, he stayed to care for the animals long past the moment when it was wise to flee. The other emotion that Hemingway flags in the story is the old man’s anxiety over the animals—he says to himself that, “There is no need to be unquiet about the cat. But the others. Now what do you think about the others?” Clearly, the man is “unquiet” about all of these animals. The danger they’re in torments him, and he worries about them more than he worries about his own life, which is endangered by his decision to sit by the road instead of fleeing. To him, though, the weight of what he has lost seems more important than what he might lose—his life—by remaining by the bridge.

While the narrator does try to get the old man to safety, his efforts and sympathy are much less than the old man’s acute concern for the animals. This begins to suggest the dehumanizing aspects of being involved in war. For example, the narrator doesn’t seem to take the old man’s concern for the animals seriously. When he tries to comfort the old man that the animals will “come through it all right,” the old man asks, “You think so?” and the narrator’s blasé and insincere response is, “Why not.” Clearly, in the face of war, the narrator finds himself unable to relate to a concern for animal life. Furthermore, the whole time the narrator is speaking with the old man, he doesn’t seem to be listening. Twice in a row the narrator asks the man what animals he left, and while the repetition might be because the man was vague in his first response, the narrator is explicitly thinking about the approaching battle while the old man speaks, which makes it plausible that he simply hasn’t heard the man respond. Even while asking emotionally fraught questions, the narrator’s mind is elsewhere: “‘And you have no family?’ I asked, watching the far end of the bridge where a few last carts were hurrying down the slope of the bank.” Therefore, even though the narrator is earnestly trying to get the man to move, he is not relating to him as a person, which is perhaps why he gives up on the man quickly, stating that there was “nothing to do about him.” Tragically, it seems that proximity to war has also made the old man devalue his own life, while the narrator—a soldier whose job is to kill the enemy—has seemingly begun to disregard the lives of others.

Hemingway notes at the end of the story that the day is Easter Sunday—the day of Christ’s resurrection, which evokes the possibility of eternal salvation for mankind. By contrast, while these two men both clearly desire to save lives (whether animal or human), the circumstances of war make them unable to succeed in even simple acts of salvation: caring for animals or making an old man cross a bridge. If Christ gave his life for mankind, while these men have begun to devalue life itself, then Hemingway suggests that the battlefield is a place without humanity or redemption.

The ThemeTracker below shows where, and to what degree, the theme of Life, Death, and War appears in each chapter of Old Man at the Bridge. Click or tap on any chapter to read its Summary & Analysis.
How often theme appears:
chapter length:
Chapter
Old Man at the Br...
Get the entire Old Man at the Bridge LitChart as a printable PDF.
"My students can't get enough of your charts and their results have gone through the roof." -Graham S.
Download 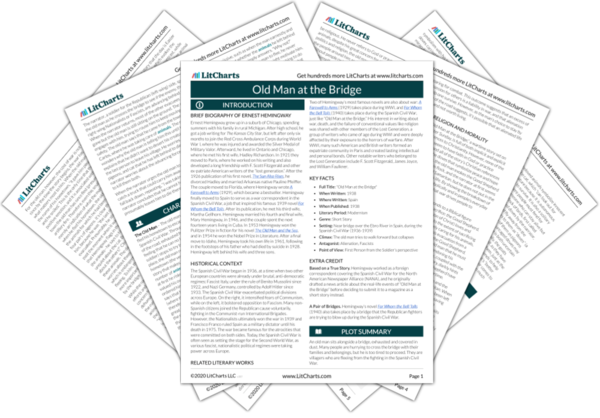 Life, Death, and War Quotes in Old Man at the Bridge