Download this LitChart! (PDF)
Teachers and parents! Struggling with distance learning? Our Teacher Edition on On Earth We’re Briefly Gorgeous can help.

Welcome to the LitCharts study guide on Ocean Vuong's On Earth We’re Briefly Gorgeous. Created by the original team behind SparkNotes, LitCharts are the world's best literature guides.

A concise biography of Ocean Vuong plus historical and literary context for On Earth We’re Briefly Gorgeous.

A quick-reference summary: On Earth We’re Briefly Gorgeous on a single page.

In-depth summary and analysis of every part of On Earth We’re Briefly Gorgeous. Visual theme-tracking, too.

Explanations of On Earth We’re Briefly Gorgeous's symbols, and tracking of where they appear.

An interactive data visualization of On Earth We’re Briefly Gorgeous's plot and themes.

Ocean Vuong was born in Ho Chi Minh City, formerly Saigon, in 1988, but grew up on a rural farm. Like Little Dog in On Earth we’re Briefly Gorgeous, Vuong’s maternal grandfather was a white American naval officer stationed in Vietnam during the war. Vuong’s grandparents were married and had three children. After the Fall of Saigon and the end of the Vietnam War in 1975, however, Vuong’s grandfather went back  home to the United States to visit his family and was unable to return again to Vietnam. In 1990, Vuong’s family fled Vietnam to a refugee camp in the Philippines and later settled in Hartford, Connecticut. Vuong went on to earn a degree in 19th-century English Literature from Brooklyn College and an MFA in poetry from New York University. He published his first chapbook (meaning a small booklet), Burnings, in 2011. Later, in 2014, he was awarded the Ruth Lilly fellowship from the Poetry Foundation, which seeks to promote poetry and culture. In 2016, Vuong published his first full-length book of poetry, Night Sky with Exit Wounds. That same year he was awarded the Whiting Award, an annual prize awarded to promising poets and writers. Vuong’s first novel, On Earth we’re Briefly Gorgeous, was published in 30 languages in 2019 to critical and popular acclaim, after which he was awarded the MacArthur “Genius” Grant, an award that invests in the future work of gifted intellectuals. Vuong currently lives in Massachusetts, where he is an Assistant Professor in the MFA program for poets and writers at UMass-Amherst.
Get the entire On Earth We’re Briefly Gorgeous LitChart as a printable PDF.
"My students can't get enough of your charts and their results have gone through the roof." -Graham S.
Download 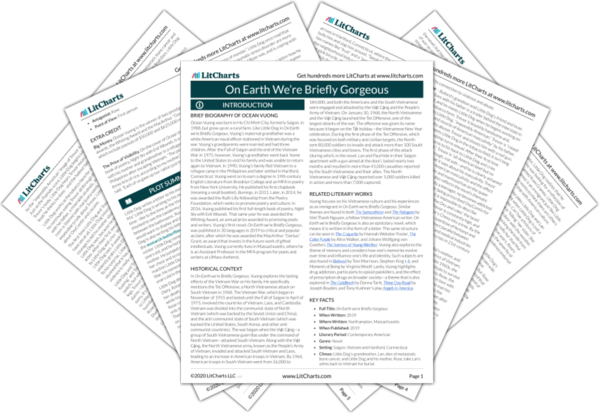 Other Books Related to On Earth We’re Briefly Gorgeous

Vuong focuses on his Vietnamese culture and his experiences as an immigrant in On Earth we’re Briefly Gorgeous. Similar themes are found in both The Sympathizer and The Refugees by Viet Thanh Nguyen, a fellow Vietnamese American writer. On Earth we’re Briefly Gorgeous is also an epistolary novel, which means it is written in the form of a letter. The same structure can be seen in The Coquette by Hannah Webster Foster, The Color Purple by Alice Walker, and Johann Wolfgang von Goethe’s The Sorrows of Young Werther. Vuong also explores the theme of memory and considers how one’s memories evolve over time and influence one’s life and identity. Such subjects are also found in Beloved by Toni Morrison, Stephen King’s It, and Moments of Being by Virginia Woolf. Lastly, Vuong highlights drug addiction, particularly to opioid painkillers, and the effect of prescription drugs on broader society—a theme that is also explored in The Goldfinch by Donna Tartt, Three Day Road by Joseph Boyden, and Tony Kushner’s play Angels in America.
Key Facts about On Earth We’re Briefly Gorgeous

Big Money. Ocean Vuong is the winner of two prestigious awards, the Whiting Award and the MacArthur “Genius” Grant, which include payouts of $50,000 and $625,000 respectively.

The Price of Visibility. On the cover of Ocean Vuong’s debut book of poetry, Night Sky with Exit Wounds, is a picture of Vuong with his mother and grandmother in a refugee camp in the Philippines after escaping Vietnam. “The picture cost my family three tins of rice, according to my mother,” Voung reportedly said. “Each of us gave up our ration just to be seen.” 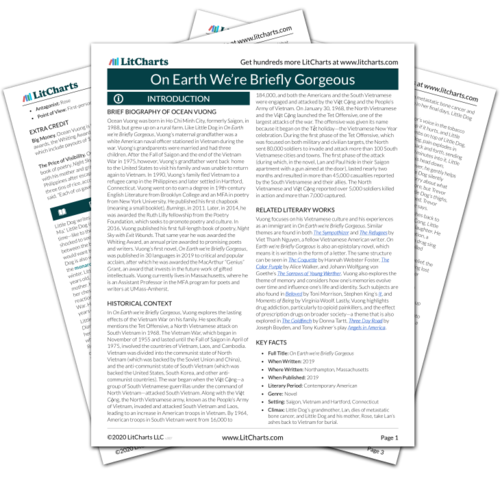 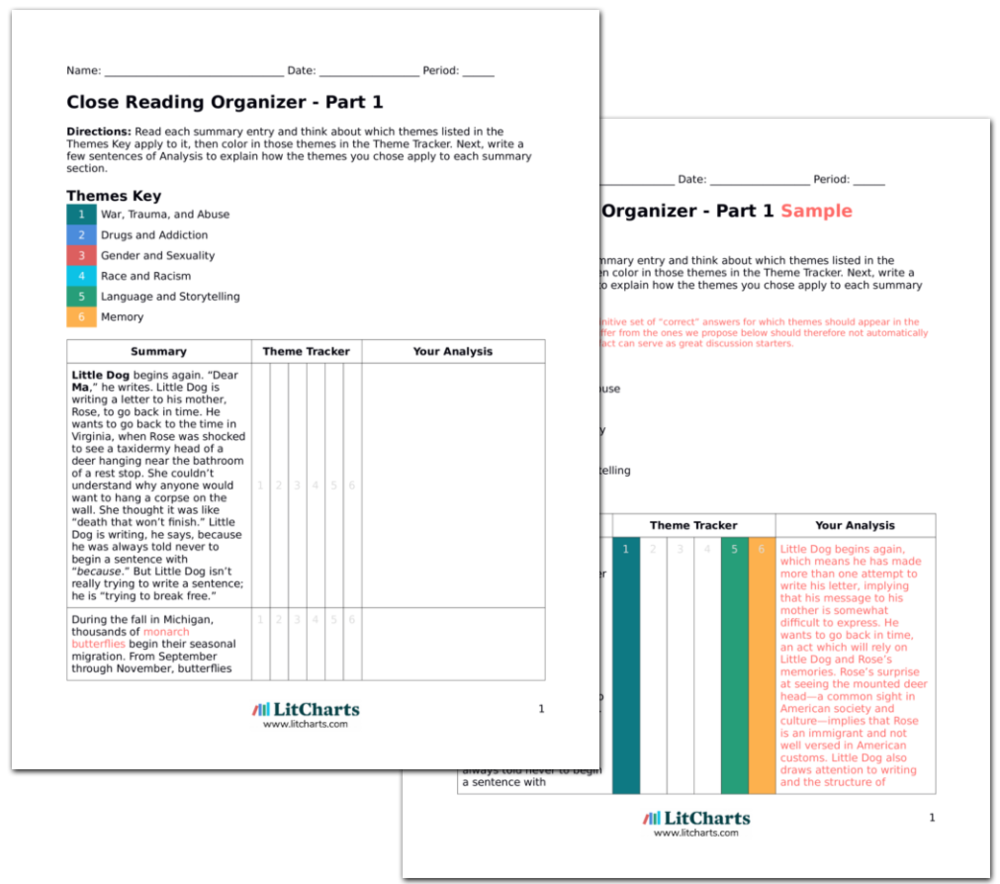