Download this LitChart! (PDF)
Teachers and parents! Struggling with distance learning? Our Teacher Edition on On Tyranny can help.
Tyranny is a word with a broad range of meanings throughout history that today usually refers to the rule of oppressive, unfair, and highly centralized government. Under tyranny, people generally live in a state of fear and danger, lacking rights and freedoms, without trust in their government, neighbors, and media. Following the American Founding Fathers, Snyder specifically defines tyranny as an individual, group, or institution turning the government into a tool to promote their own self-interest, rather than prioritizing the interests and the needs of the public. In most cases, Snyder uses the word tyranny to describe the condition of unchecked and arbitrary government power that often (but not always) comes about in totalitarian dictatorships and authoritarian governments, whether fascist like Nazi Germany, communist like the Soviet Union, or neither, like Vladimir Putin’s 21st-century Russia. However, “tyranny” describes a power structure, not a specific form of government. Non-authoritarian governments can also create tyranny. For instance, political theorists for centuries have worried about a “tyranny of the majority” oppressing the rights of minorities in a democracy—and non-government institutions and private individuals can also establish tyranny (like through slavery).

Tyranny Quotes in On Tyranny

The On Tyranny quotes below are all either spoken by Tyranny or refer to Tyranny. For each quote, you can also see the other terms and themes related to it (each theme is indicated by its own dot and icon, like this one:

). Note: all page numbers and citation info for the quotes below refer to the Tim Duggan Books edition of On Tyranny published in 2017.
Prologue Quotes

The European history of the twentieth century shows us that societies can break, democracies can fall, ethics can collapse, and ordinary men can find themselves standing over death pits with guns in their hands. It would serve us well today to understand why.

“What is truth?” Sometimes people ask this question because they wish to do nothing. Generic cynicism makes us feel hip and alternative even as we slip along with our fellow citizens into a morass of indifference. It is your ability to discern facts that makes you an individual, and our collective trust in common knowledge that makes us a society. The individual who investigates is also the citizen who builds. The leader who dislikes the investigators is a potential tyrant.

Modern tyranny is terror management. When the terrorist attack comes, remember that authoritarians exploit such events in order to consolidate power. The sudden disaster that requires the end of checks and balances, the dissolution of opposition parties, the suspension of freedom of expression, the right to a fair trial, and so on, is the oldest trick in the Hitlerian book. Do not fall for it.

If none of us is prepared to die for freedom, then all of us will die under tyranny.

Until recently, we Americans had convinced ourselves that there was nothing in the future but more of the same. The seemingly distant traumas of fascism, Nazism, and communism seemed to be receding into irrelevance. We allowed ourselves to accept the politics of inevitability, the sense that history could move in only one direction: toward liberal democracy. After communism in eastern Europe came to an end in 1989-91, we imbibed the myth of an “end of history.” In doing so, we lowered our defenses, constrained our imagination, and opened the way for precisely the kinds of regimes we told ourselves could never return. 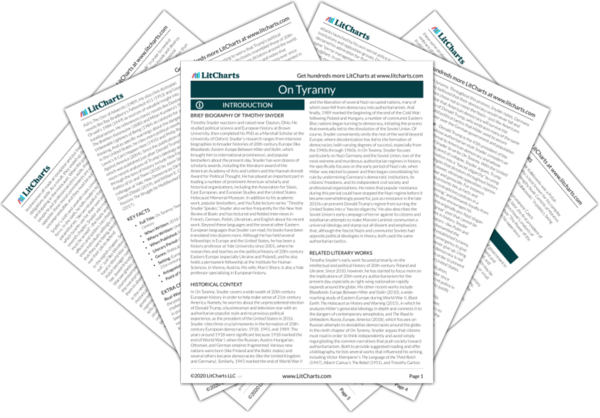 Tyranny Term Timeline in On Tyranny

The timeline below shows where the term Tyranny appears in On Tyranny. The colored dots and icons indicate which themes are associated with that appearance.

...necessarily repeat itself. Informed by ancient philosophy, the American Founding Fathers feared the rise of tyranny— powerful people using their power to benefit themselves rather than the collective. Snyder examines history... (full context)

...laws. But when armed paramilitary groups gain power, they threaten to help anti-democratic parties establish tyranny. In fact, the Nazis used a paramilitary force called the SS to terrify the populace,... (full context)

In fact, famous novels about totalitarianism, like Fahrenheit 451 and 1984, predicted this strategy: tyrants and their media prevent people from understanding the present and conceptualizing its relationship to history.... (full context)

...says, this destroys democracy. According to Klemperer, there are four ways that “truth dies.” First, tyrants ignore the truth and lie profusely—Snyder suggests that Donald Trump is a good example, as... (full context)

Responsible citizenship requires treating people respectfully. People living under the tyrannical governments of 20th-century Europe quickly learned to gauge whether they were safe or under threat... (full context)

...to the government, but in reality they are becoming less safe. The word “extremism” is meaningless—tyrants have always used it to describe their enemies, no matter their beliefs. (full context)

...prepared to die for freedom,” Snyder says simply, “then all of us will die under tyranny.” (full context) 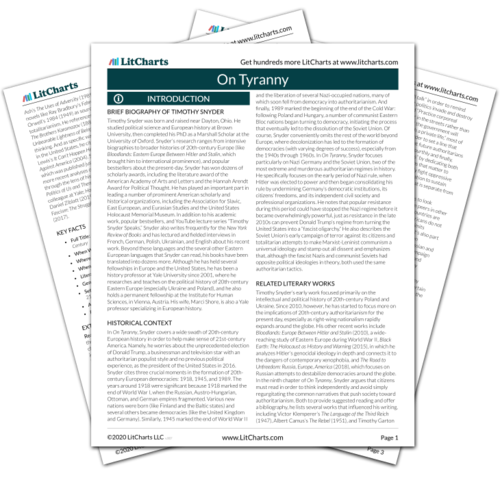 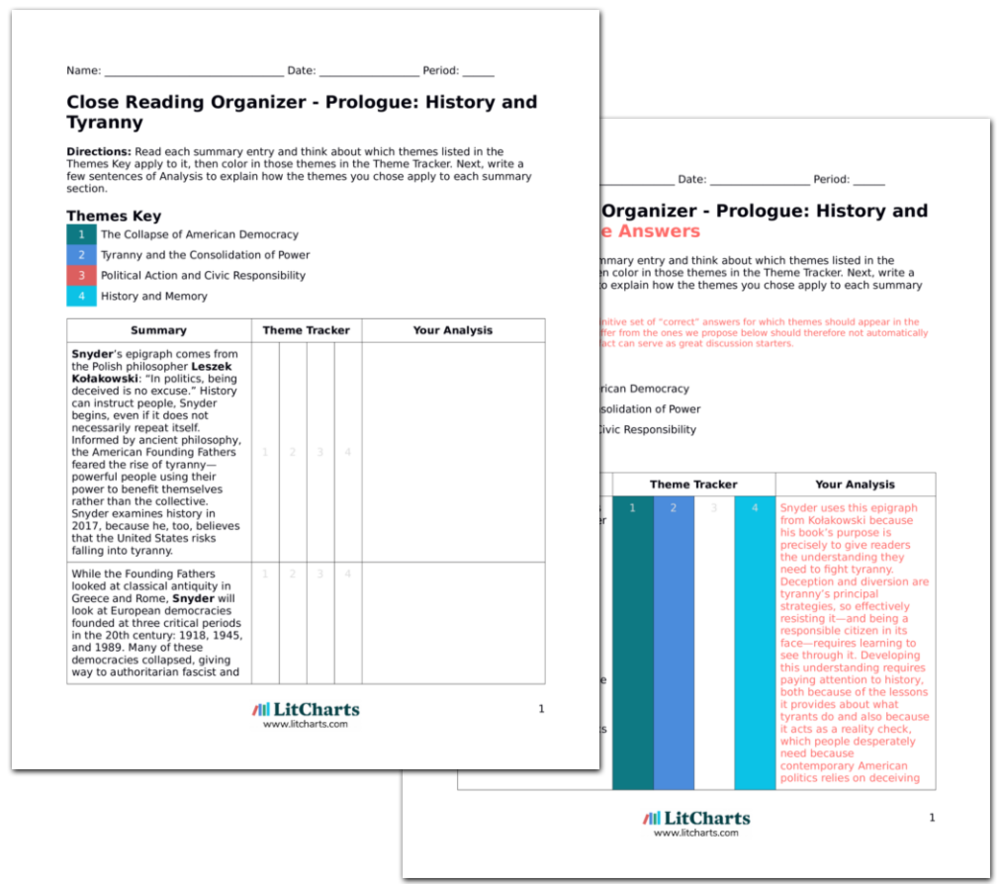