Download this LitChart! (PDF)
Teachers and parents! Struggling with distance learning? Our Teacher Edition on Oranges Are Not the Only Fruit can help.

Get LitCharts A+
A local girl whom Jeanette finds attractive, and soon recruits to join her church. Melanie and Jeanette study the Bible together several times a week, and soon find themselves tumbling into a sexual relationship. Jeanette and Melanie question whether what they’re doing falls under the umbrella of “Unnatural Passion,” which they have been warned against in church, but decide that their love is so pure and makes both of them so happy that it can’t possibly be wrong. Eventually, the girls are found out, and are called before their congregation to be publicly shamed. Jeanette, who is more in love with Melanie than Melanie is with her, refuses to repent and admit she has sinned, but Melanie repents right away. Melanie, who is a bit older, is sent to live with relatives for a time, and then goes off to university. When she returns she tries to resume a friendship with Jeanette, but Jeanette—who was heavily punished and subjected to a kind of “exorcism” when she refused to repent for her affair with Melanie—is too traumatized to accept. Eventually, Melanie returns home one final time to announce she has gotten engaged to an Army man, and Jeanette is disappointed to see that Melanie has resigned herself to a relationship that has rendered her “serene to the point of being bovine.” Melanie represents themes of women and womanhood, transgression and forgiveness, and religion and control—she is one of the many women in Jeanette’s word who helps her to become who she is, though their relationship was ultimately fraught, tumultuous, and even traumatizing for Jeanette.

Melanie Quotes in Oranges Are Not the Only Fruit

The Oranges Are Not the Only Fruit quotes below are all either spoken by Melanie or refer to Melanie. For each quote, you can also see the other characters and themes related to it (each theme is indicated by its own dot and icon, like this one:

). Note: all page numbers and citation info for the quotes below refer to the Grove edition of Oranges Are Not the Only Fruit published in 1985.
4. Numbers Quotes

We read the Bible as usual, and then told each other how glad we were that the Lord had brought us together. She stroked my head for a long time, and then we hugged and it felt like drowning. Then I was frightened but couldn’t stop. There was something crawling in my belly. I had an octopus inside me. After that we did everything together, and I stayed with her as often as I could. My mother seemed relieved that I was seeing less of Graham, and for a while made no mention of the amount of time I spend with Melanie.

“Do you think this is Unnatural Passion?” I asked [Melanie] once.

“Doesn’t feel like it. According to Pastor Finch, that’s awful.” She must be right, I thought.

Melanie and I had volunteered to set up the Harvest Festival Banquet, and we worked hard in the church throughout the day. When everyone arrived we stood on the balcony, looking down on them. Our family. It was safe.

“The Lord forgives and forgets,” the pastor told me. Perhaps the Lord does, but my mother didn’t. While I lay shivering in the parlor she took a toothcomb to my room and found all the letters [from Melanie,] all the cards, all the jottings of my own, and burnt them in the backyard. There are different sorts of treachery, but betrayal is betrayal wherever you find it. She burnt a lot more than the letters that night in the backyard. I don’t think she knew. In her head she was still queen, but not my queen any more.

Unlock with LitCharts A+
Get the entire Oranges Are Not the Only Fruit LitChart as a printable PDF.
"My students can't get enough of your charts and their results have gone through the roof." -Graham S.
Download 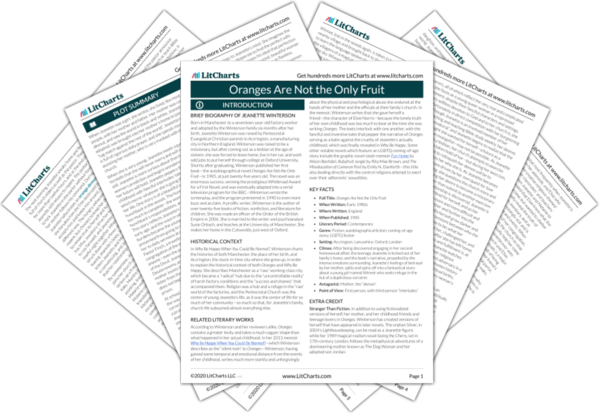 Melanie Character Timeline in Oranges Are Not the Only Fruit

The timeline below shows where the character Melanie appears in Oranges Are Not the Only Fruit. The colored dots and icons indicate which themes are associated with that appearance.

...the aquarium of fish. There, she catches her first glimpse of a beautiful girl named Melanie, who is hard at work de-boning fish on a marble slab. (full context)

Jeanette strikes up a conversation with Melanie, and the two banter back and forth. Jeanette’s mother comes to fetch her, telling her... (full context)

Each week, Jeanette goes back to the fish stall to watch Melanie work. One day, Melanie is not at work, and Jeanette stares at the seafood, feeling... (full context)

The first time that Melanie joins Jeanette at church is, in Jeanette’s words, “not a success.” Pastor Finch is in... (full context)

At the end of the sermon, Pastor Finch encourages any sinners to raise their hands. Melanie raises her hand, and after the service tells Jeanette that she needs Jesus. She asks... (full context)

Jeanette talks about Melanie all the time at home, and one day her mother tells her that the two... (full context)

...well be another organ.” As Jeanette leaves the house that afternoon to go call on Melanie, Jeanette’s mother calls out to her, warning her never to let anyone touch her “Down... (full context)

Jeanette arrives at Melanie’s, and Melanie asks her if she’ll spend the night—her mother is away, and Melanie does... (full context)

After that night, Jeanette and Melanie are inseparable. They do everything together, and Jeanette stays over at Melanie’s as often as... (full context)

Melanie and Jeanette have volunteered to work together setting up the church’s Harvest Festival Banquet, and... (full context)

...dog for a walk. As she climbs the hill, she thinks about going to see Melanie later, and thinks about how she recently revealed to her mother “as much as [she]... (full context)

Though Jeanette is happy with Melanie, she feels uncomfortable all the time lately, and is sick of lying to her mother... (full context)

...how she felt, but she was unable to really communicate to her mother all that Melanie meant to her. After the conversation, Jeanette gave her mother a kiss, and Jeanette’s mother... (full context)

...never stays out—but decides that she can use the opportunity to stay the night with Melanie. After a quick bath, Jeanette goes over to Melanie’s house, and the two of them... (full context)

...of the church, and Jeanette’s mother has gone up to join him. She is weeping. Melanie squeezes Jeanette’s hand, and Miss Jewsbury urges the girls to stand up and head to... (full context)

The pastor then turns to Melanie and asks if she promises to give up her sin and beg for forgiveness. Melanie... (full context)

...finally go home after having prayed over Jeanette all day and urging Jeanette to renounce Melanie and the demon that lives inside Jeanette herself. When all the elders leave, the pastor... (full context)

...lot about the “demon” within her. She wonders if the pure love she had for Melanie could really have belonged to a demon, and decides that if the church wants to... (full context)

...following Sunday, and Jeanette, feeling exhausted and “squashed,” agrees. She asks what has become of Melanie. Mrs. White tells Jeanette that Melanie has gone away for a while to “recover.” As... (full context)

At Melanie’s, Jeanette is turned away from the door when Melanie sees her, but Jeanette begs her... (full context)

Melanie wakes Jeanette up and tells her that she is running a temperature. Jeanette touches Melanie’s... (full context)

...mother goes through her bedroom, collecting all of her notes and letters to and from Melanie and burning them in the backyard. Jeanette, deeply hurt by this betrayal, writes that her... (full context)

By the time summer rolls around, Jeanette is her old self again. Melanie has gone away before starting university, and Jeanette is back in the fold, preparing sermons... (full context)

...slips in. Jeanette squints to see who the familiar figure is, and soon realizes that Melanie has come back. (full context)

...leaves her mother to bask in bravos at the church. Jeanette is shaken, rattled by Melanie’s sudden reappearance after having put Melanie out of her mind for so long. At nine... (full context)

...sing carols at the town hall, and a big crowd comes to watch. Jeanette spots Melanie in the crowd, but pretends not to notice when Melanie waves to her. The Salvation... (full context)

On the way to the bus stop, Jeanette feels a hand on her shoulder—it is Melanie. The two ride the bus together, and Melanie offers Jeanette an orange from her purse.... (full context)

On Palm Sunday, Melanie returns to town once more, excited to announce that she is going to be married... (full context)

...Lost. The woman demanda the truth. Jeanette spins a story in which her affair with Melanie had never really ended, and says that after months and months of heart-rending correspondence with... (full context)

...confesses to Jeanette that it was she who told Miss Jewsbury about Jeanette’s affair with Melanie. Elsie laments having gotten sick and being forced in and out of the hospital, telling... (full context)

...hall and the two begin arguing. The pastor accuses Jeanette of using her “powers” over Melanie, but Jeanette protests that Melanie loved her, and told her so—but is wounded when she... (full context) 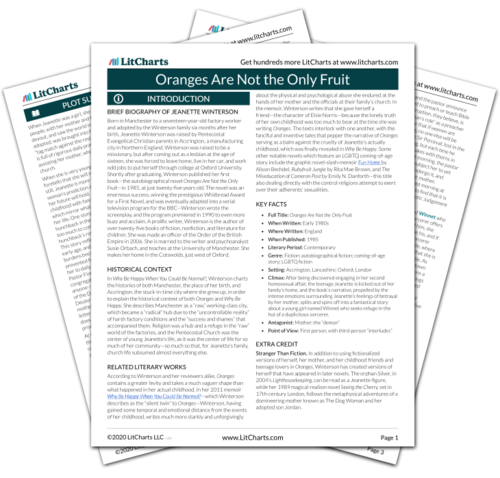 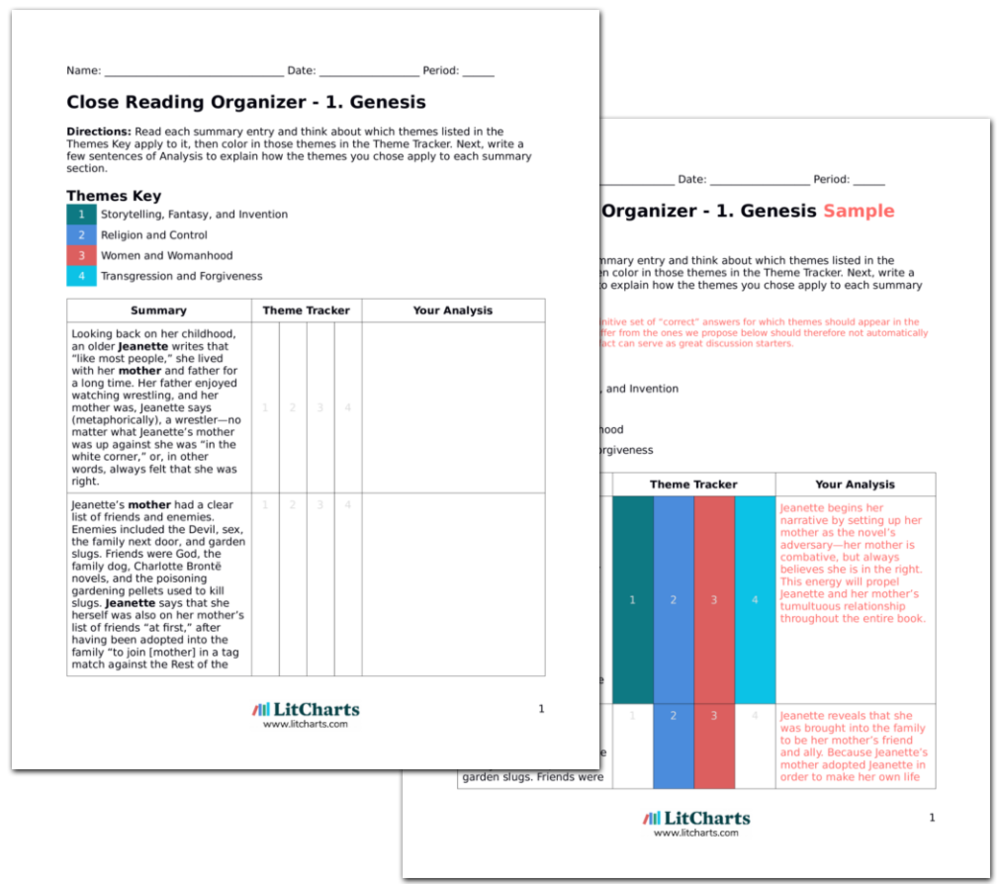