Download this LitChart! (PDF)
Teachers and parents! Struggling with distance learning? Our Teacher Edition on Ordinary Men can help.

Christopher R. Browning prefaces Ordinary Men with a disturbing statistic: in March 1942, around 80 percent of all the victims of the Holocaust were still alive while about 20 percent had already died, but a mere 11 months later these numbers would be reversed. This period, from 1942-1943, is among the most violent, bloody, and horrifying in World War II, due in no small part to the violence in major ghettos and extermination camps. Browning, however, developed an early interest in the question of whether small villages and towns were subject to the same violence as the large ghettos. In his quest for answers, Browning stumbled upon interrogation files for Reserve Police Battalion 101, a unit of the German Order Police. The level of detail in the indictments and interrogations was chilling, especially because it revealed just how ordinary the men who perpetrated extreme acts of violence evidently were. This inspired Browning to write Ordinary Men using the testimonies of more than 125 policemen from Reserve Police Battalion 101 (RPB 101).

On July 13, 1942 the men of RPB 101 arrive in Józefów, Poland and gather around their commander, Major Wilhelm Trapp. Trapp tells them that their orders for the day are to round up all the Jews in town, separate the men to be sent to work camps, and then execute the women and children. After explaining this, Trapp makes a very unusual offer: any older man who doesn’t think they can go through with the executions may be excused.

Before going on with this story, Browning details the history of the Order Police in Germany. The group has roots in the interwar era as a paramilitary group meant to deal with groups of revolutionaries. However, according to the Treaty of Versailles, Germany could not have an army more than 100,000 strong so the group was forced to disband. With the ascendance of Adolf Hitler to the chancellorship and Heinrich Himmler to head of the police, Germany began rearming itself and forming new branches of the police. Himmler placed Kurt Daluege in charge of the Order Police (regional police). Order Police numbers boomed after the start of World War II and they began deploying to newly won territory in Russia, Poland, and elsewhere. The Order Police became particularly useful in Poland, where the leader of the General Government (German-occupied Central Poland), Odilo Globocnik, found himself lacking the necessary manpower to carry out the Nazis’ Final Solution in his district.

In carrying out the Final Solution, leaders drew on the Order Police for help with major Jewish actions, including deportations to extermination camps and ghettos in the east. These deportations were often accompanied by violence as Jews tried to escape or even died of heat exhaustion in the trains. Reports from Order Police guards on these trains paint a bleak picture of starving Jews struggling to survive in extreme temperatures for several days before reaching their destinations, which were frequently extermination camps. This task, as well as resettlement actions, made up the bulk of RPB 101’s duties when they first entered Poland.

Major Trapp is an Alte Kämpfer (“old Party fighter”) and World War I veteran, but the Nazis don’t consider him to be SS material when they give him command of RPB 101. The battalion is broken up into three companies and each company is divided into three platoons. The company commanders are Julius Wohlauf (First Company), Lieutenant Gnade (Second Company), and Wolfgang Hoffmann (Third Company) and Trapp keeps Lieutenant Hagen as his deputy. The battalion arrives in Biłgoraj, Poland in the early summer of 1942, during a lull in gas chamber killings at extermination camps like Sobibór and Treblinka. Eager to carry out the Nazi’s Final Solution, Globocnik becomes impatient with the lack of killing and sends orders for RPB 101 to carry out a mass execution of Jews in Józefów.

When Trapp and his men gather in Józefów on July 13, Trapp is visibly upset by what he’s asking his men to do. When he makes the offer for any man who doesn’t want to participate in the shooting to step out, only one man, Otto-Julius Schimke, immediately steps forward. About 12 more follow his lead once they see Trapp protect Schimke from Schimke’s commander’s wrath. The battalion quickly sets to work rounding up the Jews, bringing them to the marketplace, selecting Jewish men for the work camps, and preparing firing squads. When the first firing squads are ready, a group of Jews are led into the forest, matched up with their executioners, and killed. As the first firing squad exits the forest to collect another round of Jews, the second group comes in. This pattern continues for 17 hours that day until all 1,500 Jews are killed. Throughout the day, many men ask to be excused from the violence, which is always permitted. Still, the overwhelming majority—about 80 percent—choose to shoot for the whole day. When they all return to their barracks, the men are demoralized and don’t want to talk about what happened.

Browning cites the pressure to conform to the group as a major reason that so many men from the battalion chose to shoot—individual men simply didn’t want to others to think of them as cowards. Furthermore, many of them men likely accepted the Nazi notion that Jews were enemies of Germany. Many of the men who opted out of shooting after executing at least one person cited physical revulsion, but Browning believes that there may have been underlying ethical or political opposition that they simply couldn’t articulate. A short time later, however, when Gnade leads his men in another mass execution alongside a unit of Hilfswillige (Hiwis), all of the men choose to shoot at least once. Browning argues that part of the reason for this is likely that Gnade did not explicitly offer to excuse men who didn’t want to shoot (although many men chose to stop early on).

One of the battalion’s primary duties is to help round up Jews from towns and ghettos for deportation to nearby extermination camps. A standing order for these roundups includes killing the sick and frail who struggle to walk. Thousands of Jews are rounded up at a time, sometimes with extreme violence (like at Międzyrzec) and sometimes with relative ease and order (like the second day of clearing the Parczew ghetto). The battalion does participate in more mass murders, including one in Serokomla and a retaliation killing of 78 Poles and 180 Jews after one of the battalion’s men is killed on his way back to the barracks from an assignment.

While most men grow used to the violence, others do not and they continue evading being assigned to firing squads. Lieutenant Buchmann is one of the most vocal critics of the violence and he even takes active steps to be transferred back to Germany so that he doesn’t have to be around violence anymore. Futhermore, Captain Hoffmann develops a mysterious illness that gives him stomach cramps that seem to coincide with violent actions. At the time, he attributes this to a bad dysentery vaccine he received in 1942, but later he says it was induced by the stress of the murders and violence that surrounded him. Hoffmann, too, is removed from his command and sent elsewhere.

In late fall of 1942, the battalion takes part in a new phase of the Final Solution that they call the judenjagd, or “Jew hunt.” To make their security area truly judenfrei, the men comb the forests, buildings, and barns in the district to find any Jews who are hiding and have escaped deportation. Any Jews they find are summarily shot. This process goes on for months, well into Spring 1943, and there is no way to determine precisely how many Jews the men killed during this time.

The battalion’s final murderous action comes in the fall of 1943 when they participate in the notorious Erntefest, or “harvest festival.” With most of the ghettos cleared out and hundreds if not thousands of Jews killed in the judenjagd, only a few Jews remain in small ghettos and work camps in the battalion’s district. In order to make the district truly judenfrei, Globocnik realizes that these Jews must be killed. The operation must happen all at once to minimize Jewish resistance. After an extended period of planning and preparing, on November 3, Reserve Police Battalion 101 and several other units converge on the Majdanek concentration camp, where around 18,000 Jews have been concentrated specifically for the Erntefest. The battalion helps guard the road into the inner camp where the Jews are shot to death in mass graves that they themselves dug. The next day, the same thing happens at the Paniatowa concentration camp. After this, the Lublin district is proclaimed judenfrei.

After this final massacre, most of the battalion breaks up as men transfer to different units or even form new ones. Some, like Hoppner and Peters, die in action during the war. Trapp, Buchmann, and Kammer are tried and convicted for the retaliation killing of Poles in 1942—Trapp is executed while Buchmann and Kammer are sentenced to a few years in prison. In the 1960s, charges are brought against 14 men in Reserve Police Battalion 101 for their participation in the mass murder of Jews and 210 former members are interrogated. Only a few go to prison, and some are excluded from the verdict due to their failing health. Browning asserts that, while this might seem inadequate, it is one of the only cases against Order Police that went to trial, let alone resulted in a verdict, which makes it a success.

Most of the men in Reserve Police Battalion 101 were middle-aged family men whose moral compasses were formed before rise of Nazi culture, and many of them hadn’t chosen to join the battalion but were drafted into it, meaning that they didn’t sign up to be a part of the war. Browning turns to the question of why so many of these seemingly ordinary men became mass murderers during the war, especially since they were given the freedom to choose not to kill. Ultimately, there is no single answer to this question. It was a combination of factors, including prevalent racism combined with ongoing war, the tendency to respect authority, the men’s belief in German superiority due to widespread Nazi propaganda, and, as the men themselves admit, the desire to conform to the group. This, however, has some dark implications. Many of these factors are present in most people’s everyday lives, which leads to one important question: if the men in RPB 101 were transformed into killers under such common circumstances, are there many people who wouldn’t? 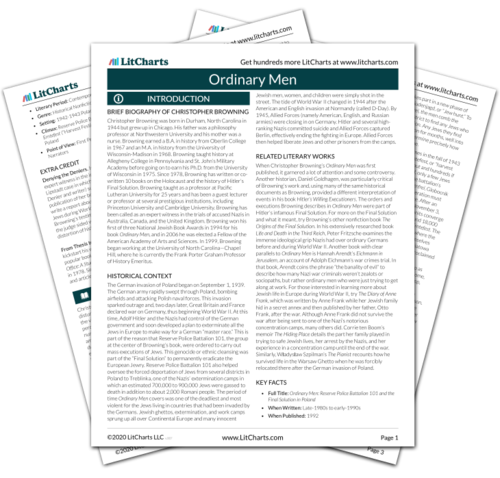 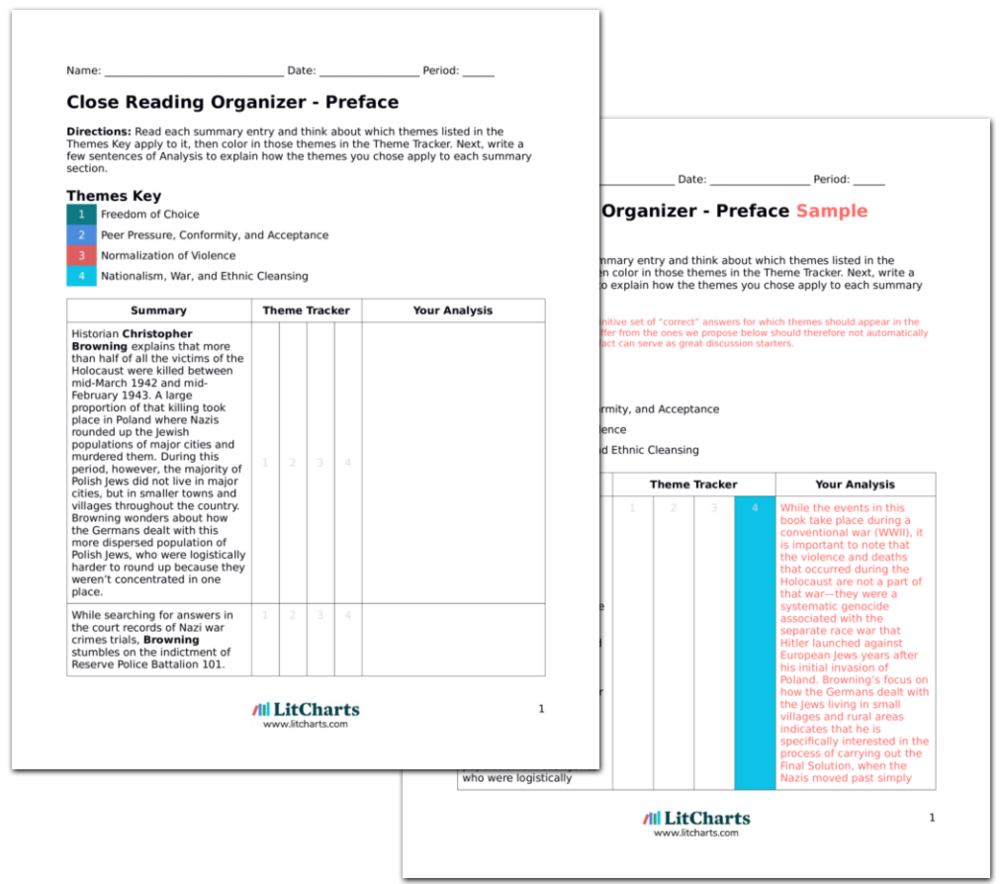