Download this LitChart! (PDF)
Teachers and parents! Struggling with distance learning? Our Teacher Edition on Orlando can help.

Welcome to the LitCharts study guide on Virginia Woolf's Orlando. Created by the original team behind SparkNotes, LitCharts are the world's best literature guides.

A concise biography of Virginia Woolf plus historical and literary context for Orlando.

A quick-reference summary: Orlando on a single page.

In-depth summary and analysis of every chapter of Orlando. Visual theme-tracking, too.

Explanations of Orlando's symbols, and tracking of where they appear.

An interactive data visualization of Orlando's plot and themes.

Adeline Virginia Stephen was born the third of four children to Julia Prinsep Jackson, a famous model for the group of Victorian painters known as the Pre-Raphaelites, and Leslie Stephen, a noted historian and biographer. Woolf grew up in a privileged household and was homeschooled as a child with a focus on Victorian literature. In 1895, her mother died of influenza, followed by her half-sister, Stella, in 1897. Woolf attended King’s College London, where she studied literature and history and began to write seriously in 1900. Woolf’s father died in 1905, and she moved with her siblings to Bloomsbury, a district in London known for its cultural and educational institutions. Living in Bloomsbury, Woolf’s circle of friends, including her brothers’ friends from Cambridge, formed a group of elite writers, artists, and philosophers known later as the Bloomsbury Group. The Bloomsbury Group had a deep respect and appreciation for art in all its forms, and they adamantly rejected the strict Victorian conventions and beliefs of their parents. The Bloomsbury Group boasted such members as E. M. Forster, Roger Fry, and Lytton Strachey, and it was where Woolf met her future husband, Leonard. The couple married in 1912, and in 1915, Woolf published her first novel, The Voyage Out. In 1917, Leonard and Virginia Woolf together opened the Hogarth Press, a publishing house in London, but her next novel, Mrs. Dalloway, was not published until 1925. Beginning with her mother’s death, Woolf struggled with mental health issues and severe bouts of depression and anxiety. During her life, Woolf was hospitalized on multiple occasions, and she twice attempted suicide. Woolf’s doctors warned her that reading and writing would aggravate her condition, and she was often prescribed alternating rest and physical exertion. In 1922, Woolf met Harold Nicolson and his wife, Vita Sackville-West, both successful writers, and Woolf and Sackville-West began a love affair that lasted most of the 1920s. By the early 1930s, their relationship had morphed into one of deep friendship, but Sackville-West was an exceedingly important part of Woolf’s life. Then a very popular writer, Sackville-West began to publish her books through the Hogarth Press, which reportedly saved the business from bankruptcy, and she encouraged Woolf to continue writing against the advice of her doctors. Indeed, Woolf did write, and she published To the Lighthouse in 1927 and Orlando, an experimental biography and love letter of sorts to Sackville-West, in 1928. Woolf is also remembered as an influential critic and essayist, of which A Room of One’s Own, published in 1929, is among her most famous. On the morning of March 28, 1941, at the age of 59, Woolf loaded her pockets with rocks and walked into the River Ouse near her home in Sussex and drowned.
Get the entire Orlando LitChart as a printable PDF.
"My students can't get enough of your charts and their results have gone through the roof." -Graham S.
Download 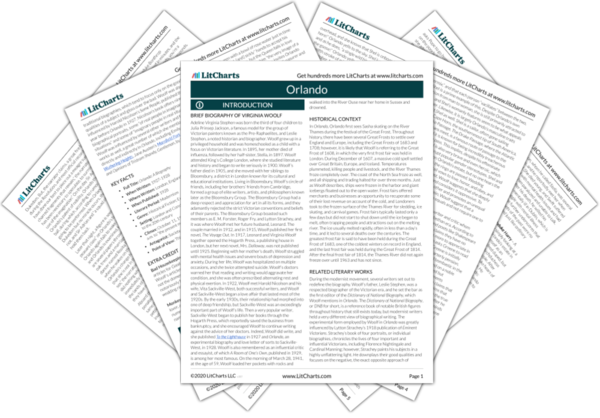 In Orlando, Orlando first sees Sasha skating on the River Thames during the festival of the Great Frost. Throughout history, there have been several Great Frosts to settle over England and Europe, including the Great Frosts of 1683 and 1708; however, it is likely that Woolf is referring to the Great Frost of 1608, in which the very first frost fair was held in London. During December of 1607, a massive cold spell settled over Great Britain, Europe, and Iceland. Temperatures plummeted, killing people and livestock, and the River Thames froze completely over. The coast of the North Sea froze as well, and all shipping and trading halted for over three months. Just as Woolf describes, ships were frozen in the harbor and giant icebergs floated out to the open water. Frost fairs offered merchants and businesses an opportunity to recuperate some of their lost revenue on account of the cold, and Londoners took to the frozen surface of the Thames River for sledding, ice skating, and carnival games. Frost fairs typically lasted only a few days but did not start to shut down until the ice began to melt, often trapping people and attractions out on the melting river. The ice usually melted rapidly, often in less than a day’s time, and it led to several deaths over the centuries. The greatest frost fair is said to have been held during the Great Frost of 1683, one of the coldest winters on record in England, and the last frost fair was held during the Great Frost of 1814. After the final frost fair of 1814, the Thames River did not again freeze over until 1963 and has not since.

Other Books Related to Orlando

During the modernist movement, several writers set out to redefine the biography. Woolf’s father, Leslie Stephen, was a respected biographer of the Victorian era, and he set the bar as the first editor of the Dictionary of National Biography, which Woolf mentions in Orlando. The Dictionary of National Biography, or DNB for short, is a reference book of notable British figures throughout history that still exists today, but modernist writers held a very different view of biographical writing. The experimental form employed by Woolf in Orlando was greatly influenced by Lytton Strachey’s 1918 publication of Eminent Victorians. Strachey’s book of four portraits, or individual biographies, chronicles the lives of four important and influential Victorians, including Florence Nightingale and Cardinal Manning; however, Strachey paints his subjects in a highly unflattering light. He downplays their good qualities and focuses on the negative, the exact opposite approach of traditional biographies, which tend to focus only on the good qualities of a subject and gloss over the bad. Woolf was also influenced by Harold Nicolson’s Some People, published the year before Orlando in 1927. Nicolson’s book offers nine biographical portraits, some “of real people in imaginary situations” and some of “imaginary people in real situations.” Woolf was influenced by several other writers and famous works as well, a great number of which she mentions both directly and indirectly in Orlando, including Emily Brontë’s Wuthering Heights, Jane Austen’s Mansfield Park, and The Life and Opinions of Tristram Shandy, Gentleman, by Laurence Sterne.
Key Facts about Orlando

Bad Housekeeping. In the 1930s, Woolf wrote a series of articles for Good Housekeeping magazine about life in London. Woolf’s articles focused mainly on art, literature, and politics, not the domestic sphere, as Woolf was reported to be a notoriously bad housekeeper who once accidentally baked her wedding ring into a rice pudding.

Monkey Business. Like Orlando, Woolf was an avid animal lover, and she had several pets throughout her life, including numerous dogs, a squirrel, and a beloved Marmoset monkey named Mitzi. 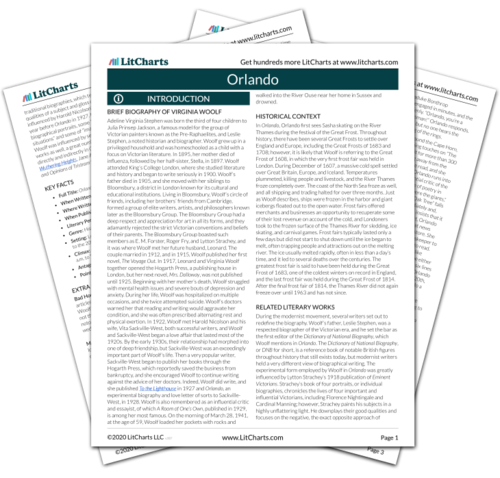 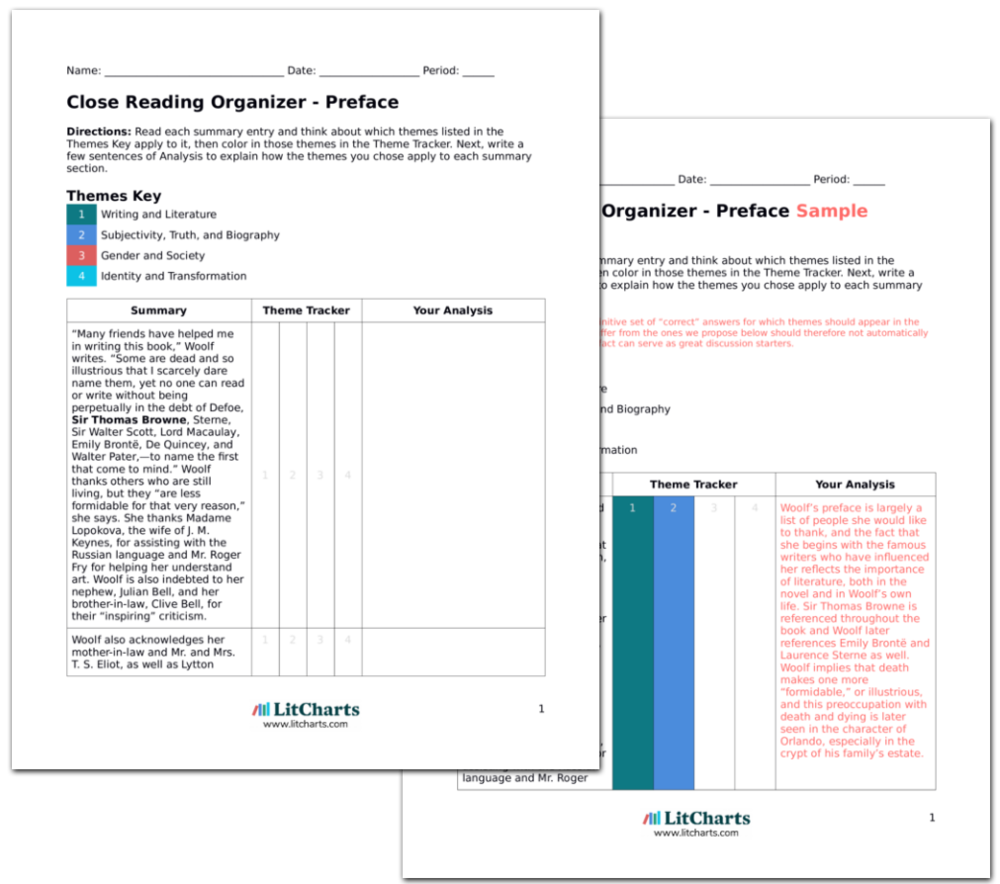