Our Country’s Good showcases Governor Phillip’s quest to create a fair mode of governance in Australia. To do this, he touts the benefits of a healthy judicial system and a just ruling class, upholding that everyone—including criminals—must be treated with respect, since this is the only way to encourage people to actively work toward the establishment of a well-functioning society. This outlook especially applies to the manner in which Phillip and Judge Collins run their court, as they go out of their way to show the convicts that their testimonies will be treated seriously and fairly. This is because they know nobody will respect or advocate for the prevailing system of government if they think it’s rigged against them. It is this kind of respect and thoughtful consideration that Wertenbaker implies is integral to the foundation of any successful society. Without this willingness to listen to even the most disenfranchised community members, the play intimates, a society will never manage to establish a legitimate justice system or an overall sense of order.

Governor Phillip has been given the difficult job of creating a just society comprised of criminals. Knowing that the convicts will be citizens of this new colony once they’re released, he wants to instill in them an appreciation of the law. To do this, he doesn’t want to scare them into simply obeying commands, but rather help them develop genuine respect for the kind of order it takes to create a successful society. “What is a statesman’s responsibility?” he says to Ralph. “To ensure the rule of law. But the citizens must be taught to obey that law of their own will. I want to rule over responsible human beings, not tyrannise over a group of animals. I want there to be a contract between us, not a whip on my side, terror and hatred on theirs.” In so many words, what Phillip wants is to work alongside the prisoners instead of against them. Rather than “rul[ing]” with an iron fist, he wants to teach the convicts to follow the law because of their own desire to do so. As such, he tries to be a benevolent guiding force who levelheadedly works with his community members toward the collective goal of building a fair society. Hoping to establish a “contract” between the ruling class and the people who will soon become everyday citizens, he seeks to use a sense of mutual respect to help his people become productive society members.

When Liz Morden refuses to defend herself after being accused of stealing food, Wertenbaker shows the audience why it’s so important for community members to feel as if their voices will be heard. Although Liz faces a death sentence, she doesn’t testify on her own behalf, declining to plead her innocence even though she isn’t guilty. After her trial, Governor Phillip and Judge Collins call a meeting with her, Lieutenant Ralph Clark, and Major Ross, hoping to get more out of her because they want to avoid hanging her. “My only fear, Your Excellency, is that she may have refused to speak because she no longer believes in the process of justice,” Collins says. “If that is so, the courts here will become travesties.” This sentiment outlines why it’s so critical for a society to treat its members fairly, since it’s impossible to achieve justice when people like Liz don’t believe in the judicial process. Major Ross, for his part, has little patience for these considerations, suggesting that they all have bigger things to worry about than whether or not Liz stole food. In response, Phillip says, “Truth is indeed a luxury, but its absence brings about the most abject poverty in a civilisation.” By saying this, he suggests that although debating over the truth might seem like a superfluous and unimportant endeavor, civilization actually relies on the ruling class to value due process. After all, if people like Liz don’t think their superiors care about the truth, they’ll have no reason to participate in or cooperate with the judicial system, which is an integral part of any society. As such, Phillip, Collins, and Ralph convince Liz that her voice will be heard, and because they’ve demonstrated their desire to truly listen to her, she eventually tells them the truth, thereby avoiding the death sentence.

Any examination of governance and the ruling class in Australia would be incomplete without recognizing the fact that British colonists like Phillip have also intruded upon groups of Aboriginal Australians. Although Wertenbaker doesn’t spend much of the play focusing on this dynamic, she does spotlight the injustice of colonialism in several moments throughout the piece, as an unnamed Aboriginal man periodically narrates what it’s like to be overtaken by the British. First, he compares the arrival of the British to a “dream” that is best left ignored, but he later realizes that it’s impossible to turn away from this “dream,” since the settlers have taken over the land and infected the Aboriginal population with small pox. For all of Governor Phillip’s talk about respect and justice, then, it becomes clear that he’s only thinking about his own society, ultimately failing to extend his thoughtfulness to the people whose land he has intruded upon. As such, the audience sees that his desire to establish a just and egalitarian civilization is somewhat insincere, since he fails to recognize the ways in which he is disrespecting Aboriginal Australians and depriving them of the same rights he so adamantly insists his own people should have. To that end, he believes that the most disenfranchised members of his own society (like Liz) deserve to be treated in a “humane” manner, but he neglects to reflect upon how poorly he and his people have treated Aboriginal Australians. In this way, Wertenbaker outlines the tragically hypocritical dynamic of colonialism, which enables settlers like Phillip to thoughtlessly oppress entire groups of people even while supposedly advocating for justice, equality, and respect. 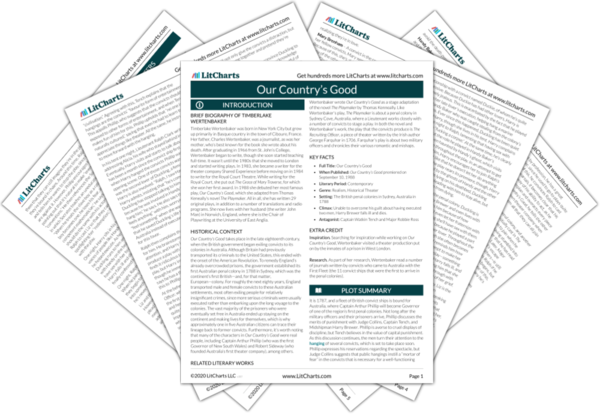 Governance and Justice Quotes in Our Country’s Good

Below you will find the important quotes in Our Country’s Good related to the theme of Governance and Justice.
Act One, Scene One Quotes

At night? The sea cracks against the ship. Fear whispers, screams, falls silent, hushed. Spewed from our country, forgotten, bound to the dark edge of the earth, at night what is there to do but seek English cunt, warm, moist, soft, oh the comfort, the comfort of the lick, the thrust into the nooks, the crannies of the crooks of England. Alone, frightened, nameless in this stinking hole of hell, take me, take me inside you, whoever you are. Take me, my comfort and we’ll remember England together.

COLLINS. […] You have been made Governor-in-Chief of a paradise of birds, Arthur.

PHILLIP. And I hope not of a human hell, Davey. Don’t shoot yet, Watkin, let’s observe them. Could we not be more humane?

TENCH. Justice and humaneness have never gone hand in hand. The law is not a sentimental comedy.

PHILLIP. I am not suggesting they go without punishment. It is the spectacle of hanging I object to. The convicts will feel nothing has changed and will go back to their old ways.

TENCH. The convicts never left their old ways, Governor, nor do they intend to.

I commend your endeavour to oppose the baneful influence of vice with the harmonising acts of civilisation, Governor, but I suspect your edifice will collapse without the mortar of fear.

TENCH. It’s their favourite form of entertainment, I should say.

PHILLIP. Perhaps because they’ve never been offered anything else.

TENCH. Perhaps we should build an opera house for the convicts.

PHILLIP. We learned to love such things because they were offered to us when we were children or young men. Surely no one is born naturally cultured?

A crime is a crime. You commit a crime or you don’t. If you commit a crime, you are a criminal. Surely that is logical? It’s like the savages here. A savage is a savage because he behaves in a savage manner. To expect anything else is foolish. They can’t even build a proper canoe.

PHILLIP. Some of these men will have finished their sentence in a few years. They will become members of society again, and help create a new society in this colony. Should we not encourage them now to think in a free and responsible manner?

TENCH. I don’t see how a comedy about two lovers will do that, Arthur.

PHILLIP. The theatre is an expression of civilisation. […] The convicts will be speaking a refined, literate language and expressing sentiments of a delicacy they are not used to. It will remind them that there is more to life than crime, punishment. And we, this colony of a few hundred will be watching this together, for a few hours we will no longer be despised prisoners and hated gaolers. We will laugh, we may be moved, we may even think a little.

WISEHAMMER. I am innocent. I didn’t do it and I’ll keep saying I didn’t.

WISEHAMMER. I am not a thief. I’ll go back to England to the snuff shop of Rickett and Loads and say, see, I’m back, I’m innocent.

WISEHAMMER. You can’t live if you think that way.

What is a statesman’s responsibility? To ensure the rule of law. But the citizens must be taught to obey that law of their own will. I want to rule over responsible human beings, not tyrannise over a group of animals. I want there to be a contract between us, not a whip on my side, terror and hatred on theirs.

I have seen the white of this animal’s bones, his wretched blood and reeky convict urine have spilled on my boots and he’s feeling modest? Are you feeling modest, Sideway?

(He shoves SIDEWAY aside.)

(DABBY goes down on all fours.)

Now wag your tail and bark, and I’ll throw you a biscuit. What? You’ve forgotten? Isn’t that how you begged for your food on the ship? Wag your tail, Bryant, bark! We’ll wait.

COLLINS. My only fear, Your Excellency, is that she may have refused to speak because she no longer believes in the process of justice. If that is so, the courts here will become travesties. I do not want that.

PHILLIP. But if she won’t speak, there is nothing more we can do. You cannot get at the truth through silence.

From distant climes o’er wide-spread seas we come,
Though not with much éclat or beat of drum,
True patriots all; for be it understood,
We left our country for our country’s good;
No private views disgraced our generous zeal,
What urg’d our travels was our country’s weal,
And none will doubt but that our emigration
Has prov’d most useful to the British nation. 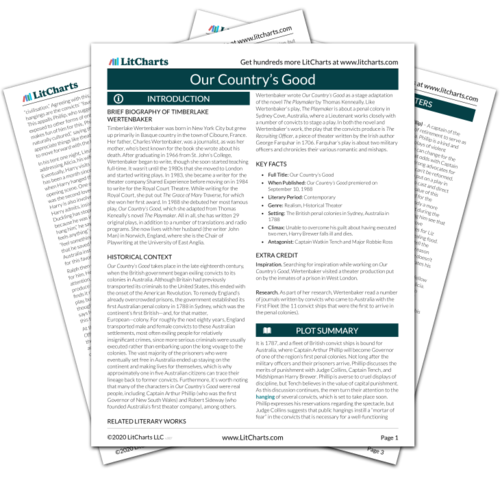 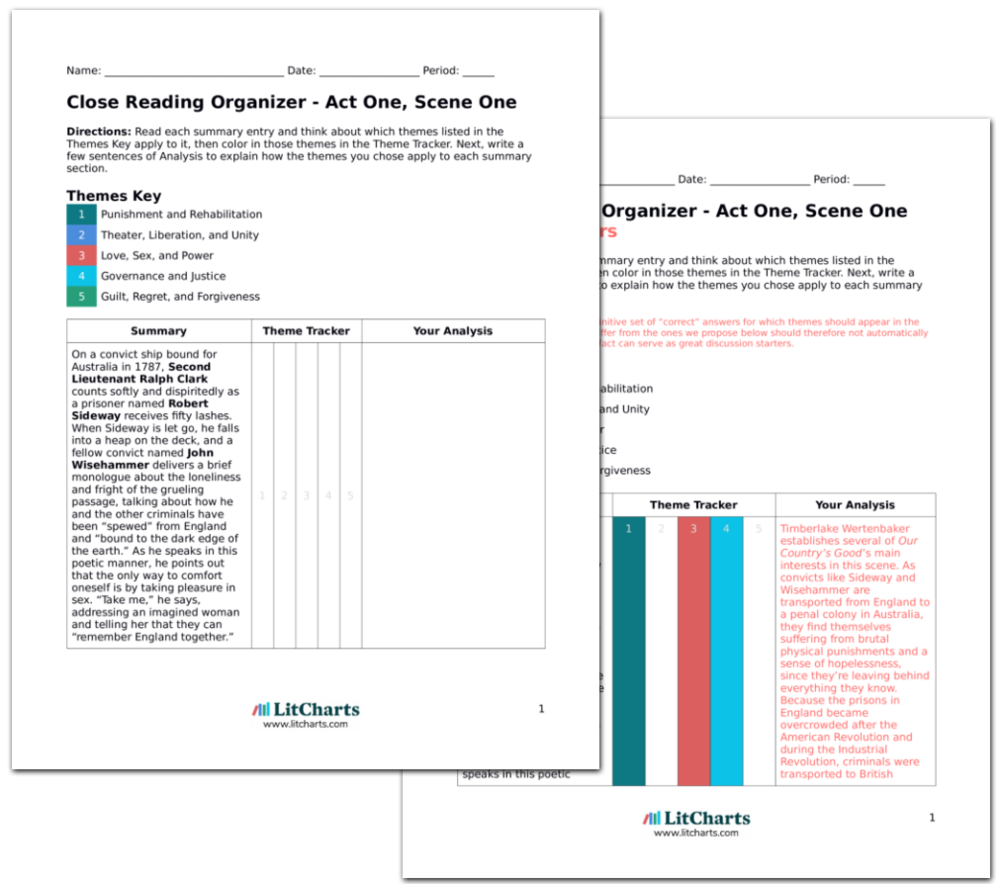