Download this LitChart! (PDF)
Teachers and parents! Struggling with distance learning? Our Teacher Edition on Out of My Mind can help.

Get LitCharts A+
LitCharts assigns a color and icon to each theme in Out of My Mind, which you can use to track the themes throughout the work.

One of the book’s central conflicts revolves around Melody’s desire to fit in and participate socially and academically with the able-bodied students at her school. Although she makes progress in certain friendships and is accepted to some extent by her Whiz Kids team, the book leaves open the question of whether Melody will ever truly “fit in.”

At times, Melody wants nothing more than to feel like a “normal” child who can easily integrate into the general population at her school. However, what keeps Melody from being “normal” also defines who she is as a person. Melody is often frustrated when her body acts in ways that are not “normal.” For example, when Melody gets angry or excited she has what she calls “tornado explosions,” physical fits where she cannot control her body. She resents these, and at one point she laments that she can’t even express her frustration in a way that feels appropriate. She says, “I feel like stomping on something. Stomping and stomping and stomping! That makes me even crazier because I can't even do that! I can't even get mad like a normal kid.” When Melody tells her neighbor and sometimes caretaker Mrs. V that she wishes she were “normal,” Mrs. V explains “Normal sucks!...People love you because you're Melody, not because of what you can or cannot do. Give us a little credit."

Rejection is a large part of Out of My Mind, and Melody evolves in her ability to deal with it. Instead of seeing rejection as a personal failure, she grows to understand that not everyone is willing or ready to accept her and her abilities, and there is nothing she can do but try her best, be herself, and educate those who do not understand her. Although students and teachers tend to accept Melody, they don’t necessarily see her as an intellectual equal. Even once Melody is officially a part of the Whiz Kids team, for example, some of the other members are unwilling and unable to treat her with respect. Though Melody helps lead her team to victory at the Regional Competition, the team makes no effort to accommodate her at a restaurant that has no wheelchair access, and then they leave her behind when the rest of the team takes an early flight to the National competition in Washington D.C. Melody makes a friend at school, Rose, but even though Rose is kinder to Melody than some of the other students, she also makes the choice to go to Washington without Melody.

Out of My Mind then depicts acceptance as a spectrum. In the end, Melody is never either completely rejected or unequivocally accepted by her classmates—instead, depending on the day or situation, Melody must settle for only partial acceptance academically, on the Whiz Kids team, and in her friendships. Although Melody wishes to be “normal,” she grows to understand that she cannot force her classmates to accept her disability, and she instead must focus on what she can control, and learn to accept herself and her limitations and abilities instead. 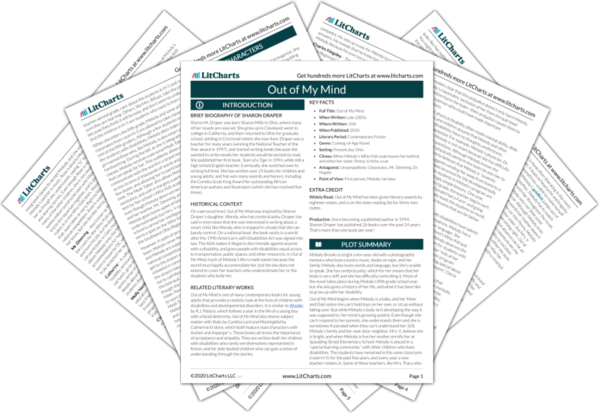 Acceptance vs. Rejection Quotes in Out of My Mind

Below you will find the important quotes in Out of My Mind related to the theme of Acceptance vs. Rejection.
Chapter 5 Quotes

There’s an alphabet strip at the top, so I can spell out words, and a row of numbers under that, so I can count or say how many or talk about time. But for the majority of my life, I’ve had the communication tools of a little kid on my board. It’s no wonder everybody thinks I’m retarded. I hate that word, by the way. Retarded.
I like all the kids in room H-5, and I understand their situations better than anybody, but there’s nobody else like me. It’s like I live in a cage with no door and no key. And I have no way to tell someone how to get me out.

When I sleep, I dream. And in my dreams I can do anything. I get picked first on the playground for games. I can run so fast! I take gymnastics, and I never fall off the balance beam. I know how to square-dance, and I’m good at it. I call my friends on the phone, and we talk for hours. I whisper secrets. I sing.
When I wake up in the morning, it’s always sort of a letdown as reality hits me. I have to be fed and dressed so I can spend another long day in the happy-face room at Spaulding Street School.

The kids in there were mostly fifth graders too. They’d probably be surprised to know that I knew all their names. I’ve watched them on the playground at lunch and at recess for years. My classmates sit under a tree and catch a breeze while they play kickball or tag, so I know who they are and how they work. I doubted if they knew any of us by name, though.

“I’m not trying to be mean—honest—but it just never occurred to me that Melody had thoughts in her head.”
A couple of other kids nod slightly.
Miss Gordon doesn’t raise her voice. Instead, she responds thoughtfully: “You’ve always been able to say whatever came to your mind, Claire. All of you. But Melody has been forced to be silent. She probably has mountains of stuff to say.”

I can answer questions in class lots better with Elvira to help me. For the first time, instead of “pretend” grades that teachers would give me because they weren’t quite sure if I knew the answer or not, I get real grades recorded in the teachers’ grade book that are based on actual answers I’ve given. Printed out and everything!
But at recess I still sit alone. It’s been too cold to go outside, so we sit in the far corner of the overheated cafeteria until it’s time to go back to class. None of the girls gossip with me about some silly thing a boy has said. Nobody promises to call me after school. Nobody asks me to come to a birthday party or a sleepover. Not even Rose.
Sure, she’ll stop and chat for a minute or two, but as soon as Janice or Paula calls her to come and look at a picture on a cell phone, Rose will say, “I’ll be right back!” then skip away as if she’s glad she has a reason to cut out on me.

I still couldn’t get over the fact that I was part of the team. Okay. Truth. There was the team, and there was me, and we were in the same room. But we weren’t quite a team. They appreciated the fact that I usually got the answers right, but…
When Mr. Dimming gave us multiple-choice questions to answer, I had to think for only a moment, then hit the correct letter on my machine. But lots of the preparation involved fast-and-furious, back-and-forth discussions, and I had trouble adding anything to what was being said—most of the time.

The reaction at school today is just what I expected. Words float out of lips that say nice things to me, but eyes tell the truth. The eyes are cold, as if I had beat the reporter over the head and forced her to print that picture of me.
Even Rose acts distant. “Nice picture of you in the paper, Melody,” she says.
“Thanks, should have been all of us.”
“I think so too,” Rose replies.
I just sigh. I can’t do anything right. I don’t want to be all that—I just want to be like everybody else.

“Your team got beat in one of the late rounds in D.C. last night,” he told me. “They got ninth place—a little bitty trophy.”
But they weren’t my team anymore. I tried to pretend like I didn’t care.

I glanced out of her large picture window and I watched the wet branches sway. How could I say it? I looked back at my talker and typed very slowly, “I want to be like other kids.”
“So you want to be mean and fake and thoughtless?”
I looked up at her angry face, then looked away. “No. Normal.”
“Normal sucks!” she roared. “People love you because you’re Melody, not because of what you can or cannot do. Give us a little credit.”

When we get to school, the air is chilly, so the aides take us directly to room H-5. As we get settled, I look at my friends there through different eyes.
Freddy, who wants to zoom to the moon.
Ashley, our fashion model.
Will, the baseball expert.
Maria, who has no enemies.
Gloria, the music lover.
Carl, our resident gourmet.
Jill, who might have once been like Penny.
Not one of them even knows how to be mean. 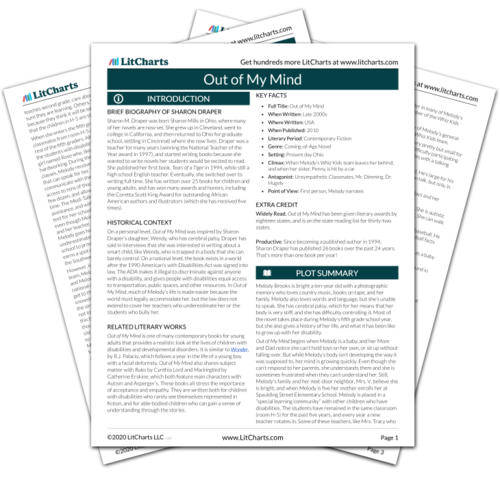 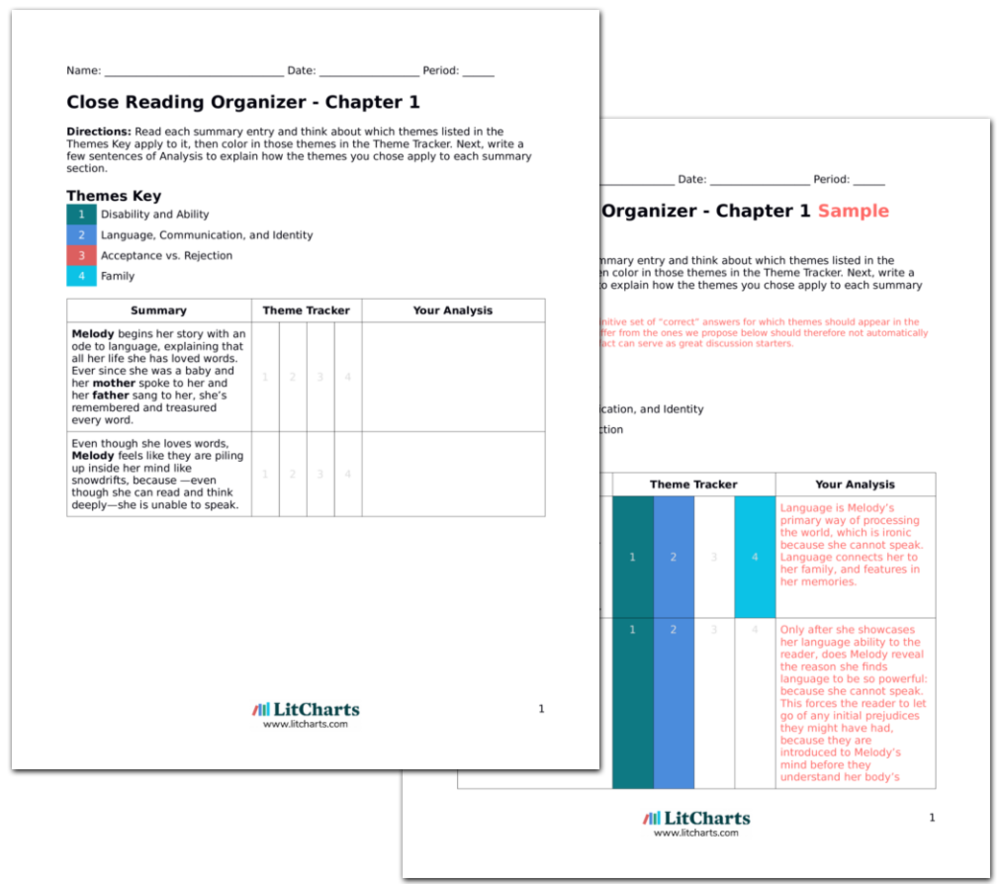