Out of This Furnace

Upgrade to A+
Introduction
Plot Summary
Detailed Summary
& Analysis
Themes
Quotes
Characters
Terms
Symbols
Theme Wheel
Joe is a Greek-Catholic Slovak and George Kracha’s best friend. He is also Dorta’s first husband and Andrei Sedlar’s brother-in-law. Kracha meets Dubik in White Haven, Pennsylvania, and Dubik helps Kracha settle in America. The two men become quick friends and roommates, and, for years, Dubik is the only person to whom Kracha reveals the truth about losing all of his travel money trying to woo Zuska. Dubik and Dorta move to Braddock before the Krachas, and Dubik begins working in the steel mill. When Kracha moves to Braddock, Dubik helps his friend secure a job in the mill. Dubik serves as a moderating influence over Kracha, advising him about work and suggesting that he be more sympathetic to Elena. Dubik’s importance in Kracha’s life makes him a tragic character, as a furnace explosion burns Dubik alive not long after Kracha settles in Braddock. He is the first significant character in the novel killed in the steel mill, and Kracha’s efforts to save his friend’s life by carrying him from the accident scene and bringing him to his home reveal Dubik’s ability to bring out the best in Kracha, who otherwise frequently succumbs to his own selfish impulses.

Joe Dubik Quotes in Out of This Furnace

The Out of This Furnace quotes below are all either spoken by Joe Dubik or refer to Joe Dubik. For each quote, you can also see the other characters and themes related to it (each theme is indicated by its own dot and icon, like this one:

). Note: all page numbers and citation info for the quotes below refer to the University of Pittsburgh Press edition of Out of This Furnace published in 1941.
Part 1, Chapter 5 Quotes

She had to work hard, cooking, washing, scrubbing; and what pleasure did she ever get? Women had a hard time of it, Dubik said. Put yourself in her place. How would you like to live her life, eh?

Unlock explanations and citation info for this and every other Out of This Furnace quote.

These were the same people who snorted disrespectfully when they were reminded that in books and speeches Carnegie had uttered some impressive sounds about democracy and workers' rights.

Unlock with LitCharts A+
Get the entire Out of This Furnace LitChart as a printable PDF.
"My students can't get enough of your charts and their results have gone through the roof." -Graham S.
Download it! 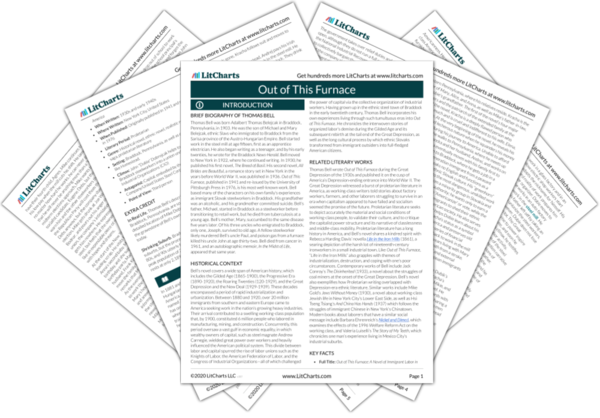 Joe Dubik Character Timeline in Out of This Furnace

The timeline below shows where the character Joe Dubik appears in Out of This Furnace. The colored dots and icons indicate which themes are associated with that appearance.

...language is “understandably Slovak,” but with a noticeable Rusnak accent. The man’s name is Joe Dubik. He is a Greek-Catholic Slovak who tells Kracha that Kracha’s brother-in-law, Andrej Sedlar, is the... (full context)

...of his money. Later, during an early springtime walk on the railroad tracks, Kracha tells Dubik the truth about how he blew his travel money on Zuska, a truth Dubik vows... (full context)

...is now listless and largely uninterested in his desires, but soon she becomes pregnant. Meanwhile, Dubik sends for his sweetheart, Dorta, to come to Pennsylvania from Slovakia. She arrives at Thanksgiving... (full context)

...Plymouth, where their third daughter, Anna, is born. While Kracha continues toiling on the railroad, Dubik tires of the work, and decides to move with Dorta to Braddock to work in... (full context)

Kracha misses his friend, and Dubik’s absence saddens Elena, as he frequently urged Kracha (to little avail) to sympathize with her... (full context)

Kracha wishes to see his friend Dubik, but the Braddock mills run constantly. After receiving his first paycheck, he and Andrej travel... (full context)

...discuss the pros and cons of keeping boarders and the difficulty of finding a house. Dubik entertains the idea of settling on a small farm, but Kracha says he got his... (full context)

Mike Dobrejcak, the son of the carpenter in Dubik’s native village, writes that he is moving to Braddock, and asks Dubik to find him... (full context)

Fed up with the chaos in Homestead, Kracha asks Dubik to secure him a job in the Braddock steel mill. The Krachas move to Braddock,... (full context)

Dubik tries to speak, but his scorched face cracks. He tells Kracha not to take him... (full context)

Dubik’s horrific death weighs heavily on Kracha. A few weeks after the accident, he, Dorta, and... (full context)

...purchased Kracha’s old shop. Dorta also reminds Kracha that it is the third anniversary of Dubik’s death. Kracha says he would be “better off if [Dubik] had lived,” but Dorta does... (full context)

...gave their lives to the steel mills, people like Mike Dobrejcak, Mary Dobrejcak, Pauline, Joe Dubik, and Kracha, as well as “all the thousands of lives the mills had consumed as... (full context) 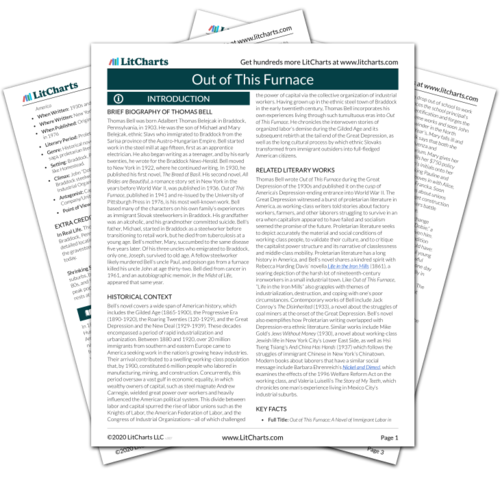 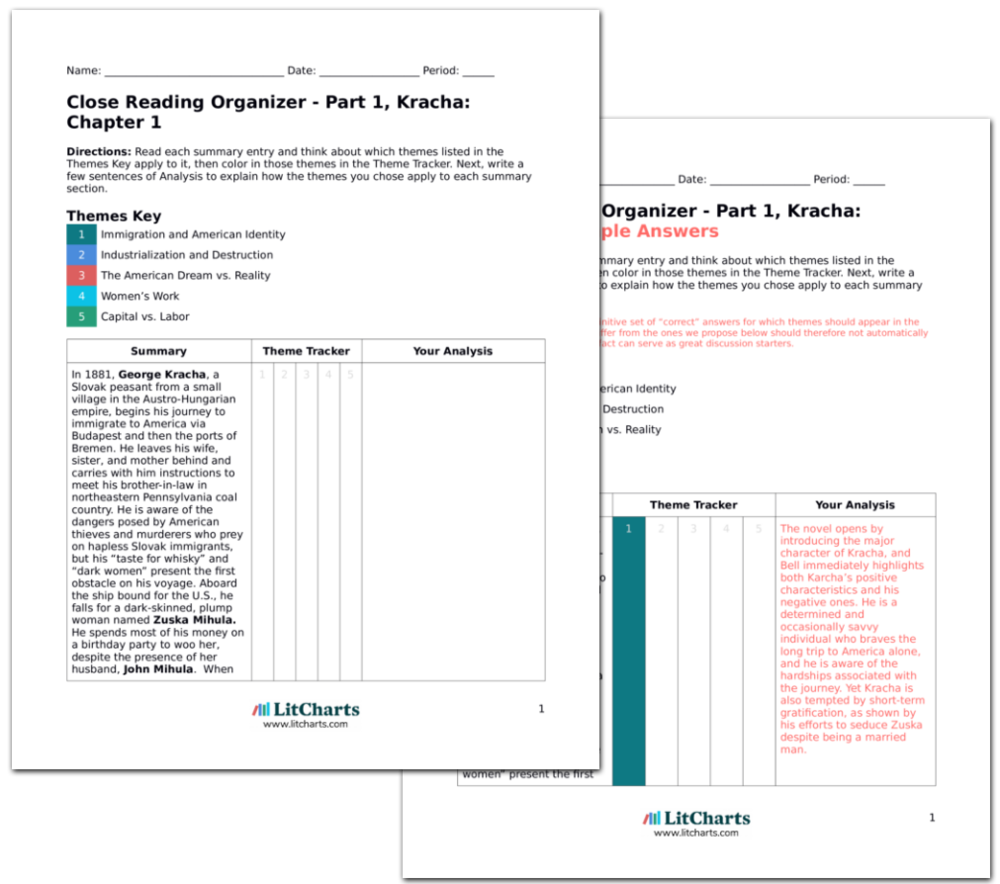