In-depth summary and analysis of every of Pale Horse, Pale Rider. Visual theme-tracking, too.

Explanations of Pale Horse, Pale Rider's symbols, and tracking of where they appear.

Katherine Anne Porter was born Callie Russel Porter on May 15, 1890 in Indian Creek, Texas. Porter’s mother, Mary Alice Porter, died when she was very young, and her father, Harrison Boone Porter, Katherine, and her four siblings moved in with their grandmother, Catherine Ann Porter, in Kyle, Texas. Porter would eventually assume her grandmother’s name as a sign of the great influence she had on her upbringing. Porter attended public school but received no formal education after her early teenage years. In 1915, Porter and her abusive husband divorced. Porter spent time working in Chicago as a movie extra before moving back to Texas to work as an actress and singer. Later that year, Porter was diagnosed with tuberculosis (later amended to bronchitis) and was institutionalized for two years. It was during this time that she decided to become a writer. Following her release from the hospital, Porter worked as a drama critic and gossip columnist (like Miranda and Towney in “Pale Horse, Pale Rider”). In 1918, while working for the Rocky Mountain News in Denver, she fell ill with influenza and nearly died. After this, she worked as a ghost writer of children’s literature in New York City and a magazine editor in Mexico, where she met Diego Rivera and other members of the Mexican leftist movement. Porter moved between New York and Mexico for the next decade, during which time that she began to publish short stories and essays. Porter became an elected member of National Institute of Arts and Letters in 1943, and she served as a writer in residence at the University of Chicago, the University of Michigan, and the University of Virginia. In addition to this, she taught at Stanford University, the University of Michigan, and the University of Texas.  Though she is better known for her short stories, Porter did publish a successful novel, Ship of Fools, in 1962. She died in 1980 after a vast and accomplished life.
Get the entire Pale Horse, Pale Rider LitChart as a printable PDF.
"My students can't get enough of your charts and their results have gone through the roof." -Graham S.
Download 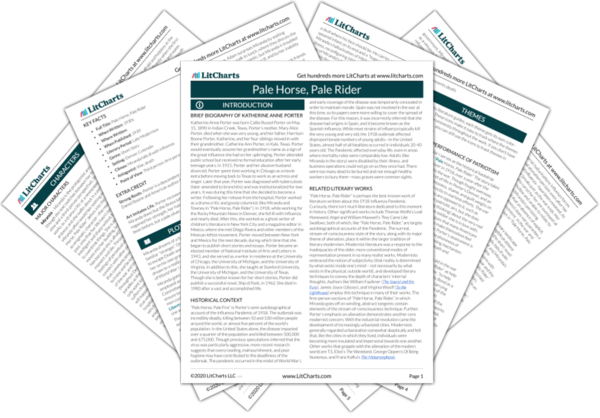 “Pale Horse, Pale Fire” is Porter’s semi-autobiographical account of the Influenza Pandemic of 1918. The outbreak was incredibly deadly, killing between 50 and 100 million people around the world, or almost five percent of the world’s population. In the United States alone, the disease impacted over a quarter of the population and killed between 500,000 and 675,000. Though previous speculations inferred that the virus was particularly aggressive, more recent research suggests that overcrowding, malnourishment, and poor hygiene may have contributed to the deadliness of the outbreak. The pandemic occurred in the midst of World War I, and early coverage of the disease was temporarily concealed in order to maintain morale. Spain was not involved in the war at this time, so its papers were more willing to cover the spread of the disease. For this reason, it was incorrectly inferred that the disease had origins in Spain, and it become known as the Spanish Influenza. While most strains of influenza typically kill the very young and very old, the 1918 outbreak affected disproportionate numbers of young adults—in the United States, almost half of all fatalities occurred in individuals 20-40 years old. The Pandemic affected everyday life, even in areas where mortality rates were comparably low. Adults (like Miranda in the story) were disabled by their illness, and business operations could not go on as they once had. There were too many dead to be buried and not enough healthy workers to bury them—mass graves were common sights.

“Pale Horse, Pale Rider” is perhaps the best-known work of literature written about the 1918 Influenza Pandemic. Curiously, there isn’t much literature dedicated to this moment in history. Other significant works include Thomas Wolfe’s Look Homeward, Angel and William Maxwell’s They Came Like Swallows, both of which, like “Pale Horse, Pale Rider,” are largely autobiographical accounts of the Pandemic. The surreal, stream-of-consciousness style of the story, along with its major theme of alienation, place it within the larger tradition of literary modernism. Modernist literature was a response to the inadequacies of the older, more conventional modes of representation present in so many realist works. Modernists embraced the notion of subjectivity (that reality is determined by what exists inside one’s mind – not necessarily by what exists in the physical, outside world), and developed literary techniques to convey the depth of characters’ internal thoughts. Authors like William Faulkner (The Sound and the Fury), James Joyce (Ulysses), and Virginia Woolf (To the Lighthouse) employ this technique in many of their works. The first-person sections of “Pale Horse, Pale Rider,” in which Miranda goes off on winding, abstract tangents contain elements of the stream-of-consciousness technique. Further, Porter’s emphasis on alienation demonstrates another core modernist concern. With the industrial revolution came the development of increasingly urbanized cities. Modernists generally regarded urbanization somewhat skeptically and felt that, like the cities in which they lived, individuals were becoming more insulated and impersonal towards one another. Other works that grapple with the alienation of the modern world are T.S. Eliot’s The Wasteland, George Oppen’s Of Being Numerous, and Franz Kafka’s The Metamorphosis.
Key Facts about Pale Horse, Pale Rider

Art Imitates Life. Porter recovered from the flu (just as Miranda does) but the illness left her completely bald. As she regained her strength, her hair grew back—not black, as it had been before, but a pale silver. 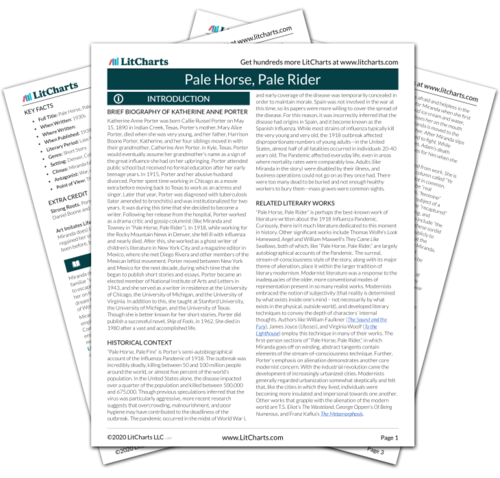 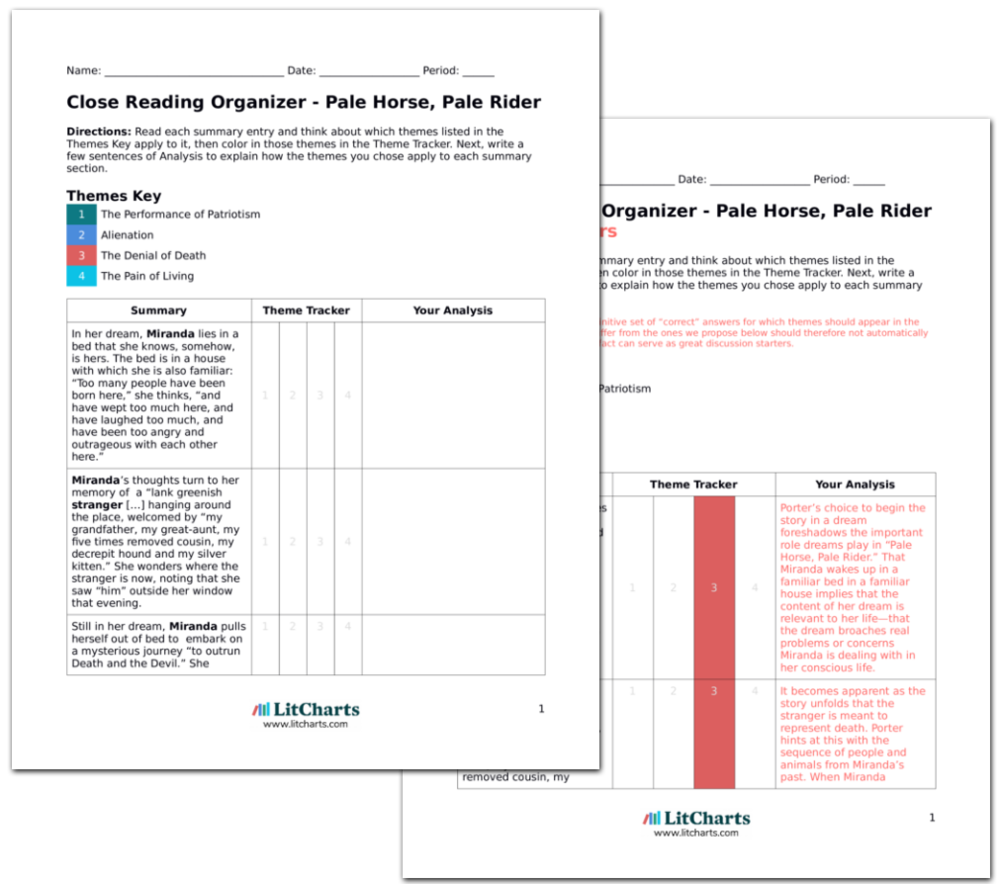