Welcome to the LitCharts study guide on John Milton's Paradise Lost. Created by the original team behind SparkNotes, LitCharts are the world's best literature guides.

A concise biography of John Milton plus historical and literary context for Paradise Lost.

A quick-reference summary: Paradise Lost on a single page.

In-depth summary and analysis of every section of Paradise Lost. Visual theme-tracking, too.

Explanations of Paradise Lost's symbols, and tracking of where they appear.

An interactive data visualization of Paradise Lost's plot and themes.

Milton was the son of a Protestant composer who provided him with an excellent education. Milton became proficient in several languages and graduated from Cambridge in 1632. He then travelled around Europe, where he studied and wrote poems, including the pastoral poem Lycidas. He returned to England and married the sixteen-year-old Mary Powell, but the marriage was unhappy and Milton began developing radical ideas about divorce. Mary Powell eventually died in childbirth, as did Milton’s second wife, Katherine Woodcock, and then Milton married Elizabeth Mynshull. Overall he had four children, all by Mary Powell. When the English Civil War broke out in 1642, Milton supported Oliver Cromwell and wrote in defense of the regicide of Charles I. After the monarchy was restored, Milton went into hiding and composed Paradise Lost, his most famous work. He was completely blind by then, and dictated the poem to his daughter. Milton was eventually pardoned by the monarchy and lived the rest of his life peacefully, dying of kidney failure at 65.
Get the entire Paradise Lost LitChart as a printable PDF.
"My students can't get enough of your charts and their results have gone through the roof." -Graham S.
Download 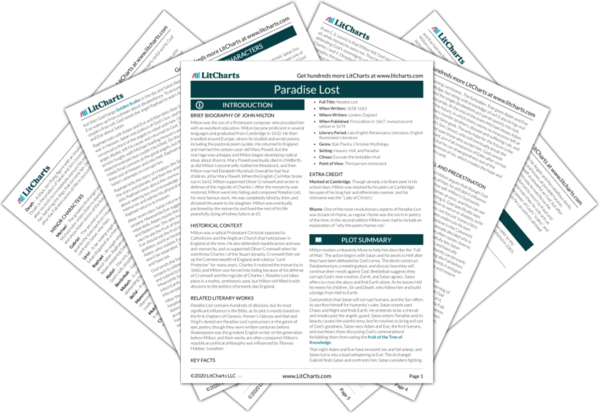 Milton was a radical Protestant Christian opposed to Catholicism and the Anglican Church that held power in England at the time. He also defended republicanism and was anti-monarchy, and so supported Oliver Cromwell when he overthrew Charles I of the Stuart dynasty. Cromwell then set up the Commonwealth of England and ruled as “Lord Protector” for many years. Charles II restored the monarchy in 1660, and Milton was forced into hiding because of his defense of Cromwell and the regicide of Charles I. Paradise Lost takes place in a mythic, prehistoric past, but Milton still filled it with allusions to the politics of present-day England.

Other Books Related to Paradise Lost

Paradise Lost contains hundreds of allusions, but its most significant influence is the Bible, as its plot is mostly based on the first chapters of Genesis. Homer’s Odyssey and Iliad and Virgil’s Aeneid are Paradise Lost’s precursors in the genre of epic poetry, though they were written centuries before. Shakespeare was the greatest English writer of the generation before Milton, and their works are often compared. Milton’s republican political philosophy was influenced by Thomas Hobbes’ Leviathan.
Key Facts about Paradise Lost

Mocked at Cambridge. Though already a brilliant poet in his school days, Milton was mocked by his peers at Cambridge because of his long hair and effeminate manner, and his nickname was the “Lady of Christ’s.”

Rhyme. One of the most revolutionary aspects of Paradise Lost was its lack of rhyme, as regular rhyme was the norm in poetry of the time. In the second edition Milton even had to include an explanation of “why the poem rhymes not.” 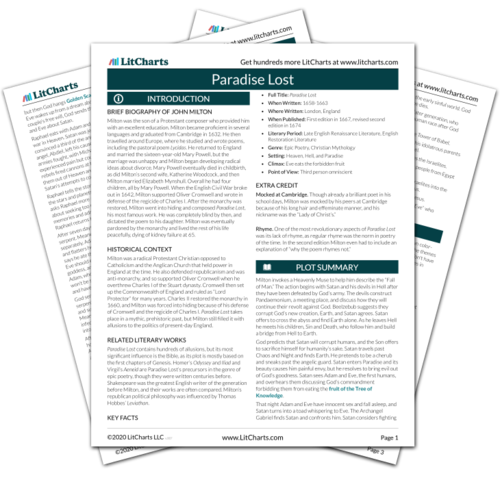