Download this LitChart! (PDF)
Teachers and parents! Struggling with distance learning? Our Teacher Edition on Paradiso can help.

Welcome to the LitCharts study guide on Dante Alighieri's Paradiso. Created by the original team behind SparkNotes, LitCharts are the world's best literature guides.

A concise biography of Dante Alighieri plus historical and literary context for Paradiso.

A quick-reference summary: Paradiso on a single page.

In-depth summary and analysis of every canto of Paradiso. Visual theme-tracking, too.

Explanations of Paradiso's symbols, and tracking of where they appear.

An interactive data visualization of Paradiso's plot and themes.

Little is known of Dante’s youth, except that he was born into a family that supported Florence’s Guelph political faction. According to autobiographical writings, Dante met a girl named Beatrice Portinari when he was still a child, and he loved her long before he was settled into an arranged marriage with a woman named Gemma Donati, with whom he had several children. As a young man, Dante fought for the Guelphs at the battle of Campaldino in 1289. After the Guelph victory, Dante seems to have taken at least a modest role in Florentine politics. In 1302, as a member of the offshoot known as the White Guelphs, Dante was exiled from Florence, after which he wandered Europe and Italy for a number of years. His interest in poetry and philosophy appears to have deepened as he stepped away from political life, although the exile was always painful for him. It’s unknown where Dante was educated, but his writings reveal that he was familiar with the Tuscan and Provençal poetry traditions as well as classical writings. Dante’s lifelong love for Beatrice from afar (she died in 1290) also reflects the medieval poetic theme of courtly love, which Dante incorporated into his own literary style (which he called the dolce stil novo, or “sweet new style”). Dante died in Ravenna not long after finishing Paradiso, the last volume of The Divine Comedy.
Get the entire Paradiso LitChart as a printable PDF.
"My students can't get enough of your charts and their results have gone through the roof." -Graham S.
Download 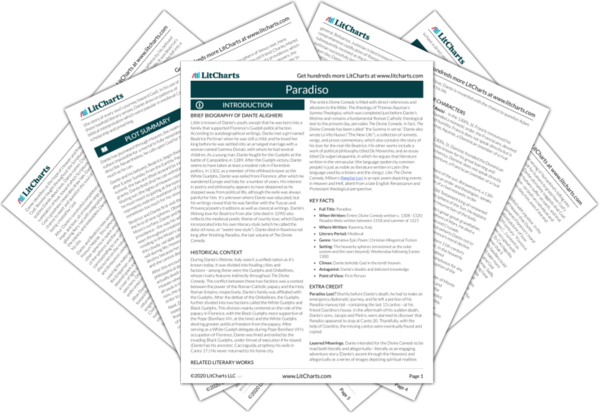 During Dante’s lifetime, Italy wasn’t a unified nation as it’s known today. It was divided into feuding cities and factions—among these were the Guelphs and Ghibellines, whose rivalry features indirectly throughout The Divine Comedy. The conflict between these two factions was a contest between the power of the Roman Catholic papacy and the Holy Roman Empire, respectively. Dante’s family was affiliated with the Guelphs. After the defeat of the Ghibellines, the Guelphs further divided into two factions called the White Guelphs and Black Guelphs. This division mainly centered on the role of the papacy in Florence, with the Black Guelphs more supportive of the Pope (Boniface VIII, at the time) and the White Guelphs desiring greater political freedom from the papacy. After serving as a White Guelph delegate during Pope Boniface VIII’s occupation of Florence, Dante was fined and exiled by the invading Black Guelphs, under threat of execution if he stayed. (Dante has his ancestor, Cacciaguida, prophesy his exile in Canto 17.) He never returned to his home city.

Other Books Related to Paradiso

The entire Divine Comedy is filled with direct references and allusions to the Bible. The theology of Thomas Aquinas’s Summa Theologica, which was completed just before Dante’s lifetime and remains a fundamental Roman Catholic theological text to the present day, pervades The Divine Comedy. In fact, The Divine Comedy has been called “the Summa in verse.” Dante also wrote La Vita Nuova (“The New Life”), a collection of sonnets, songs, and prose commentary, which also contains the story of his love for the real-life Beatrice. His other works include a work of political philosophy titled De Monarchia, and an essay titled De vulgari eloquentia, in which he argues that literature written in the vernacular (the language spoken by common people) is just as noble as literature written in Latin (the language used by scholars and the clergy). Like The Divine Comedy, Milton’s Paradise Lost is an epic poem depicting events in Heaven and Hell, albeit from a late English Renaissance and Protestant theological perspective.
Key Facts about Paradiso

Paradise Lost? Shortly before Dante’s death, he had to make an emergency diplomatic journey, and he left a portion of his Paradiso manuscript—containing the last 13 cantos—at his friend Giardino’s house. In the aftermath of his sudden death, Dante’s sons, Jacopo and Pietro, were alarmed to discover that Paradiso appeared to stop at Canto 20. Thankfully, with the help of Giardino, the missing cantos were eventually found and copied.

Layered Meanings. Dante intended for the Divine Comedy to be read both literally and allegorically—literally as an engaging adventure story (Dante’s ascent through the Heavens) and allegorically as a series of images depicting spiritual realities (the story of every soul’s journey toward God). In his use of these twofold literary senses, Dante drew on patterns of biblical interpretation which were popular in medieval Catholic scholarship and preaching. 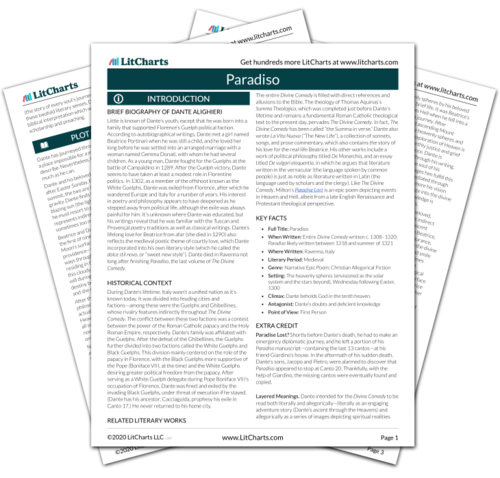 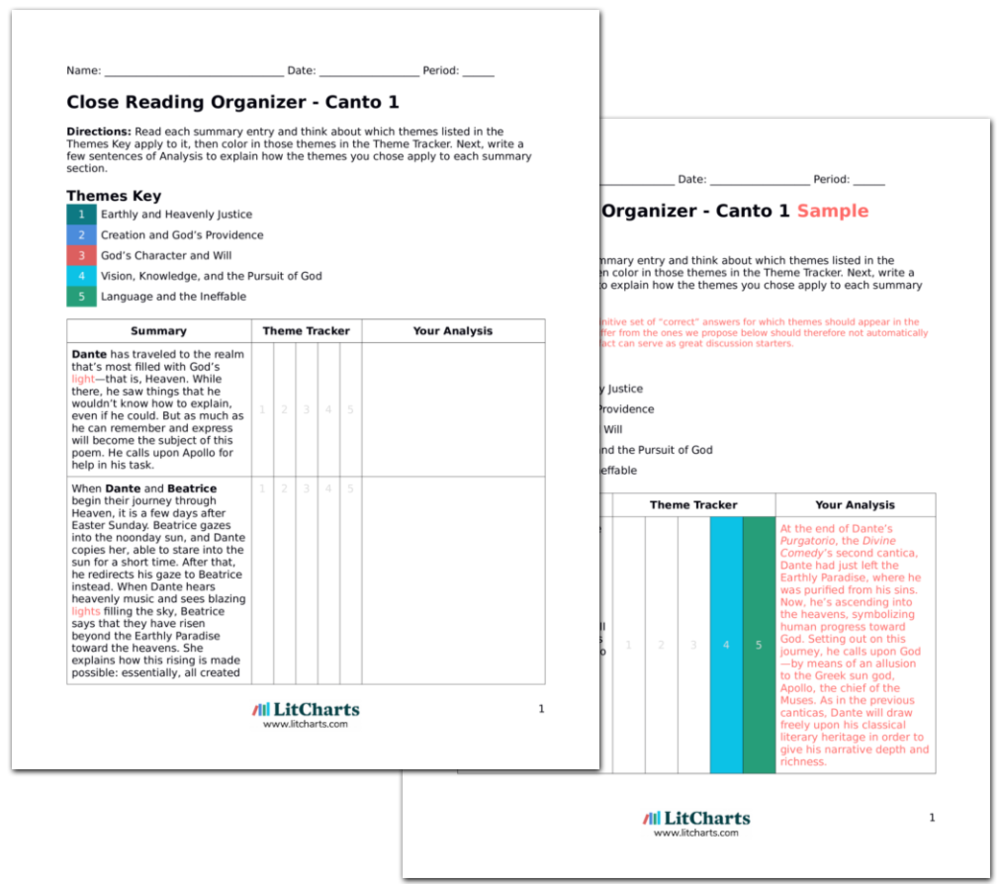