In the preface, Freire discusses how Pedagogy of the Oppressed came to be, noting that it is based on his past experiences as a teacher in Brazil and his observations from the period in which he was in political exile. While trying to spur critical consciousness (or conscientização) in his students, Freire realized that many of them harbor a “fear of freedom.” However, he posits that this fear is not really a fear of freedom, but a fear of the risks associated with freedom. Freire also acknowledges potential criticisms of his theories as being too idealistic or reactionary and acknowledges that the book is written “for radicals.” He directly contrasts sectarianism—a belief system that misrepresents the world and tries to prevent change—with radicalization, a commitment to significant social change and human liberation. According to Freire, the educational model he posits can only be successful if its participants have been radicalized. Freire reflects on the incompleteness of his work, pointing out that the reader can view it critically and find aspects of his argument that even he has missed.

Chapter 2 introduces Freire’s theories on education. He breaks down the traditional relationship between teachers and students, in which teachers have power and knowledge, but the students do not. In this “banking model” of education, a teacher “deposits” facts into the mind of the students, who have to memorize and recall them. Freire critiques this model and suggests that it teaches students to adapt to an oppressive world, instead of teaching them how to view the world critically. In the fight for liberation, oppressed people and educators should reject the banking model: Freire replaces it with a “problem-posing model” that makes teachers and students more equal. Problem-posing education presents students with worldly problems that relate to their lives and pushes them to analyze how and why those problems exist. According to Freire, this model directly combats oppression by empowering people to question their conditions, and by encouraging dialogue.

Freire begins Chapter 3 by expanding on the concept of dialogue: within a hierarchal society, he argues that dialogue is an act of “love, humility, and faith” in humanity. Dialogue also requires hope, mutual trust, and critical thinking from the people who are in dialogue together. Like the bigger fight for liberation, dialogue consists of both thoughts and concrete actions together (“praxis”); and Freire critiques people who only reflect, or only take action. From there, he explores the relationship between human beings and the world, arguing that educators should account for how their students perceive reality and history. He contrasts animals—which do not perceive history, but only live in the present—and people, who can understand that humans have shaped the world today and can shape its future. Historical moments are characterized by the ideas and values of people during that moment; Freire calls the worldly expression of those ideas “themes.” By discovering these themes in a classroom environment, students can deepen their understanding of the world, and educators can gain insight into their students’ perspectives. Freire proposes one way of achieving this, in which educators use auditory and visual materials to present students with a situation and gauge their feelings about it. 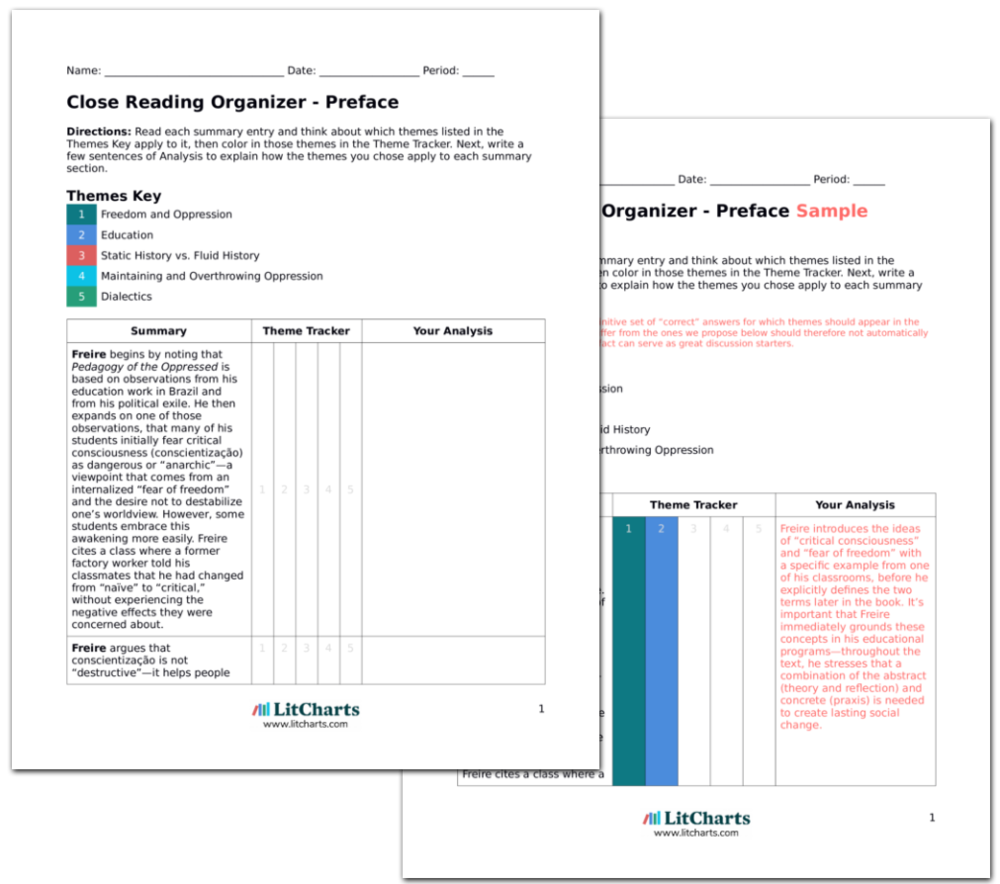