An aerial view of the novel would show two distinct worlds: the ordinary, rule-bound adult world and the wild, magical child world, separated by several days’ flying. An aerial view of a person’s life might show a similar partitioning. But a closer look at the novel shows a different geography, and a different economy of magic. The adult and child worlds, the ordinary and the magical, are always in close contact. Sometimes they even exchange roles, like the lost boys and the indians, who sometimes “in the middle of a fight … would suddenly change sides.”

In the adult world there is Mrs. Darling, who rearranges her children’s minds at night; there are night-lights who “yawn” and sometimes fall asleep, and stars who shout things like: “Now, Peter!” There is a dog who behaves like a lady, and a man who sleeps in a kennel. Sometimes Neverland “comes too near” the adult world and strange boys break through. And in Neverland there are fairies who fix kitchenware, and pirates who worry about their outfits; there are times when the game of ordinary life is a more fantastic adventure than any of the wonders of imagination. The tragedy of growing up is qualified, minimized, by its partial but continual postponement. No one ever entirely grows up.

The Fantastic and the Commonplace ThemeTracker 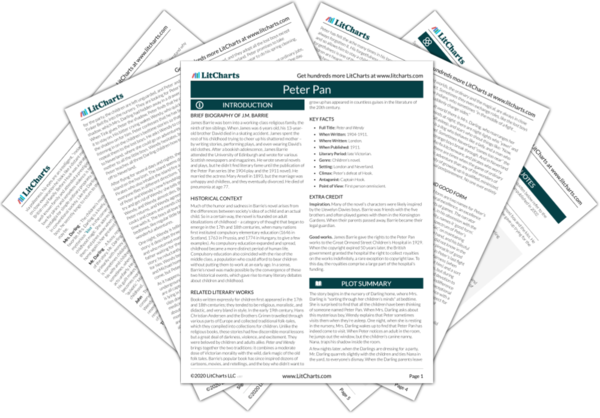 The Fantastic and the Commonplace Quotes in Peter Pan

Below you will find the important quotes in Peter Pan related to the theme of The Fantastic and the Commonplace.
Chapter 1 Quotes

He got all of her, except the innermost box and the kiss. He never knew about the box, and in time he gave up trying for the kiss.

It is the nightly custom of every good mother after her children are asleep to rummage in their minds and put things straight for next morning, repacking into their proper places the many articles that have wandered during the day.

She dreamt that the Neverland had come too near and that a strange boy had broken through from it. He did not alarm her, for she thought she had seen him before in the faces of many women who have no children.

The difference between [Peter] and the other boys at such a time was that they knew it was make-believe, while to him make-believe and true were exactly the same thing.

Sometimes, though not often, he had dreams, and they were more painful than the dreams of other boys. For hours he could not be separated from these dreams, though he wailed piteously in them. They had to do, I think, with the riddle of his existence.

He regretted now that he had given the birds of the island such strange names that they are very wild and difficult of approach.

There was little sound, and none agreeable save the whir of the ship's sewing machine at which Smee sat, ever industrious and obliging, the essence of the commonplace, pathetic Smee.

If she was too fond of her rubbishy children she couldn't help it. Look at her in her chair, where she has fallen asleep. The corner of her mouth, where one looks first, is almost withered up. Her hand moves restlessly on her breast as if she had a pain there. Some like Peter best and some like Wendy best, but I like her best.

He had ecstasies innumerable that other children can never know; but he was looking through the window at the one joy from which he must be for ever barred.

He took Mrs. Darling's kiss with him. The kiss that had been for no one else Peter took quite easily. Funny. But she seemed satisfied.

It is only the gay and innocent and heartless who can fly.