Download this LitChart! (PDF)
Teachers and parents! Struggling with distance learning? Our Teacher Edition on Photograph 51 can help.

Welcome to the LitCharts study guide on Anna Ziegler's Photograph 51. Created by the original team behind SparkNotes, LitCharts are the world's best literature guides.

A concise biography of Anna Ziegler plus historical and literary context for Photograph 51.

A quick-reference summary: Photograph 51 on a single page.

In-depth summary and analysis of every of Photograph 51. Visual theme-tracking, too.

Explanations of Photograph 51's symbols, and tracking of where they appear.

An interactive data visualization of Photograph 51's plot and themes.

Born in New York and educated at several prestigious institutions—including Saint Ann’s School in Brooklyn, Yale University, the University of East Anglia, and New York University—Anna Ziegler studied and honed her craft for years before her breakout play, Photograph 51, premiered in 2015 in London’s West End to rave reviews. The production, starring Nicole Kidman in her first theatrical role in decades, catapulted Ziegler to worldwide renown. Photograph 51 won London’s 2016 WhatsOnStage award for Best New Play and was heralded by news outlets including The Washington Post and The Telegraph as one of the best plays of the year. Since then, Ziegler’s work has been presented at The Williamstown Theatre Festival, The Manhattan Theatre Club, The Geffen Playhouse, and The Roundabout Theatre Company, to name just a few of the theaters both experimental and established that have commissioned Ziegler’s work. Four of her best-known works are collected in Anna Ziegler: Plays One, an anthology available from Oberon Books.
Get the entire Photograph 51 LitChart as a printable PDF.
"My students can't get enough of your charts and their results have gone through the roof." -Graham S.
Download 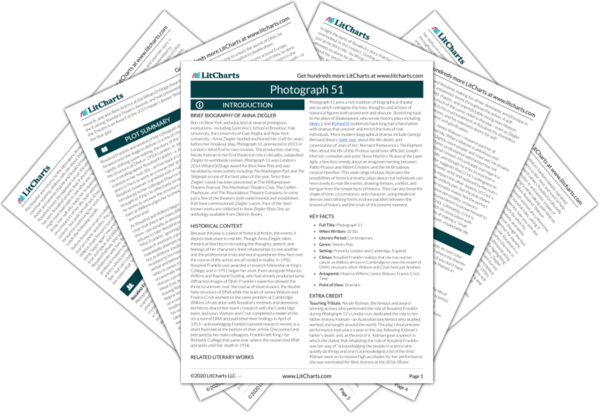 Because the play is a piece of historical fiction, the events it depicts took place in real life. Though Anna Ziegler takes theatrical liberties in recreating the thoughts, speech, and feelings of her characters, their relationships to one another and the professional trials and moral quandaries they face over the course of the action are all rooted in reality. In 1950, Rosalind Franklin was awarded a research fellowship at King’s College, and in 1951 began her work there alongside Maurice Wilkins and Raymond Gosling, who had already produced some diffraction images of DNA. Franklin’s expertise allowed the three to uncover, over the course of several years, the double-helix structure of DNA while the team of James Watson and Francis Crick worked on the same problem at Cambridge. Wilkins’s frustration with Rosalind’s methods and demeanor led him to share their team’s research with the Cambridge team, and soon, Watson and Crick completed a model of the structure of DNA and published their findings in April of 1953—acknowledging Franklin’s pivotal research merely in a short footnote at the bottom of their article. Discounted and betrayed by her male colleagues, Franklin left King’s for Birkbeck College that same year, where she researched RNA and polio until her death in 1958.

Other Books Related to Photograph 51

Photograph 51 joins a rich tradition of biographical theater pieces which reimagine the lives, thoughts, and actions of historical figures both prominent and obscure. Stretching back to the plays of Shakespeare, who wrote history plays including King John, Julius Caesar, and the Henriad, audiences have long had a fascination with dramas that uncover and enrich the lives of real individuals. More modern biographical dramas include George Bernard Shaw’s Saint Joan, about the life, death, and canonization of Joan of Arc; Bernard Pomerance’s The Elephant Man, about the life of the Proteus syndrome-afflicted Joseph Merrick; comedian and actor Steve Martin’s Picasso at the Lapin Agile, a fanciful comedy about an imagined meeting between Pablo Picasso and Albert Einstein; and the hit Broadway musical Hamilton. This wide range of plays illustrates the possibilities of historical drama: plays about real individuals can hew closely to real-life events, drawing tension, conflict, and intrigue from the simple facts of history. They can also bend the shape of time, circumstance, and character, using theatrical devices and colliding forms to draw parallels between the lessons of history and the trials of the present moment.
Key Facts about Photograph 51

Touching Tribute. Nicole Kidman, the famous and award-winning actress who performed the role of Rosalind Franklin during Photograph 51’s London run, dedicated the role to her father Antony Kidman—an Australian biochemist who studied, worked, and taught around the world. The play’s final preview performance took place a year to the day following Kidman’s father’s death, and, at the end of it, Kidman gave a speech in which she stated that inhabiting the role of Rosalind Franklin was her way of “acknowledging the people in science who quietly do things and aren’t acknowledged a lot of the time.” Kidman went on to receive high accolades for her performance: she was nominated for Best Actress at the 2016 Olivier Awards, and won Best Actress at the WhatsOnStage Awards, the Evening Standard Theatre Awards, and was presented with the Theatre Icon Award at the 2015 Harper’s Bazaar Women of the Year gala. 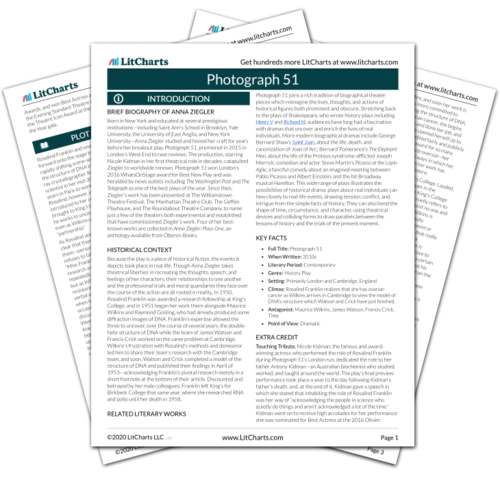 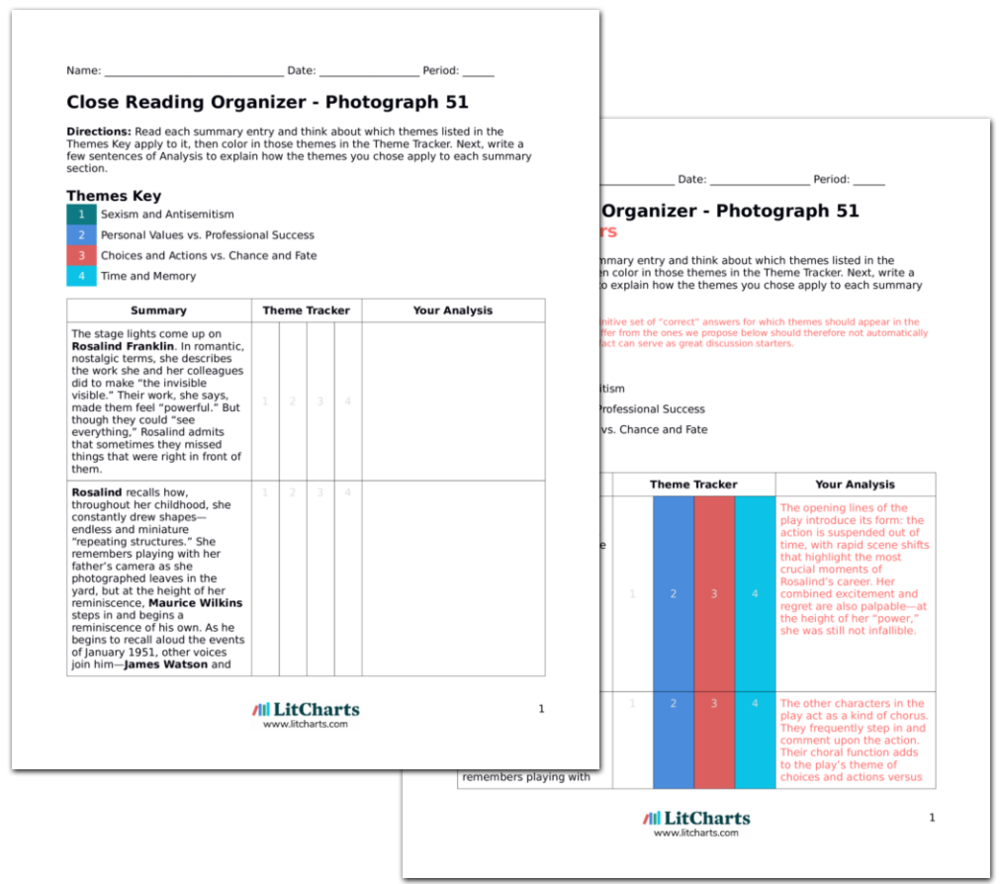