Download this LitChart! (PDF)
Teachers and parents! Struggling with distance learning? Our Teacher Edition on Picnic at Hanging Rock can help.

Welcome to the LitCharts study guide on Joan Lindsay's Picnic at Hanging Rock. Created by the original team behind SparkNotes, LitCharts are the world's best literature guides.

A concise biography of Joan Lindsay plus historical and literary context for Picnic at Hanging Rock.

A quick-reference summary: Picnic at Hanging Rock on a single page.

In-depth summary and analysis of every chapter of Picnic at Hanging Rock. Visual theme-tracking, too.

Explanations, analysis, and visualizations of Picnic at Hanging Rock's themes.

Description, analysis, and timelines for Picnic at Hanging Rock's characters.

Explanations of Picnic at Hanging Rock's symbols, and tracking of where they appear.

An interactive data visualization of Picnic at Hanging Rock's plot and themes.

Joan Lindsay was born into a prominent Australian family just a few years before the turn of the 20th century. She described her childhood as “uneventful,” and was raised in a mansion called St. Margaret’s just outside Melbourne. At 13 she was sent to boarding school—during her years at the Melbourne girls’ school, the institution changed names and ownership. Despite the turbulence at school, Lindsay was regarded as a good student and excelled in art. Lindsay went on to study at the National Gallery of Victoria Art School in Melbourne and married a fellow art student named Daryl Lindsay in 1922. The two remained together during the fallow and unpredictable years of the Great Depression, renting out their large Mulberry Hill house to make ends meet. As her husband’s painting career took off, Lindsay began focusing on writing novels and plays, receiving great acclaim for her satirical novel Through Darkest Pondelayo, a book which lampooned the then-popular genre of sensationalist travel literature. In 1943, Daryl became the Director of the National Gallery of Victoria, and in 1956, he was knighted. In 1967, Joan Lindsay published her most popular and enduring work, Picnic at Hanging Rock. The novel was written and marketed as a true story, though there is no historical record or evidence of a disappearance of four schoolgirls ever taking place at the famed rock. The novel was a sensation in Australia and abroad—for the rest of her life, Lindsay would constantly dodge questions from her reading public and from her work’s adaptors (including Peter Weir, who made a 1975 feature film based on the novel) about the tale’s authenticity and the novel’s ambiguous ending. After her husband’s death, Lindsay continued writing and resumed painting. She died of cancer in 1984, and, in 1987, an excised final chapter of Picnic at Hanging Rock revealing a strange sci-fi twist was published posthumously.
Get the entire Picnic at Hanging Rock LitChart as a printable PDF.
"My students can't get enough of your charts and their results have gone through the roof." -Graham S.
Download 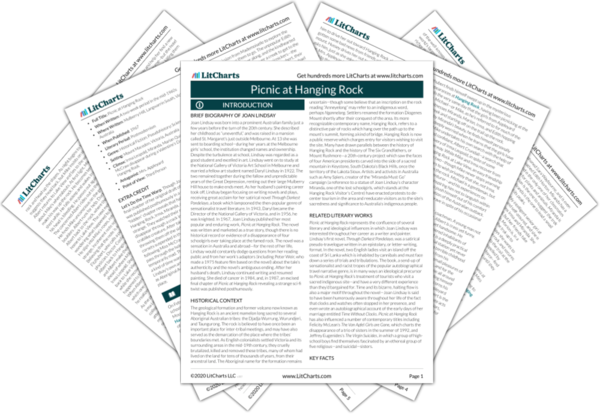 The geological formation and former volcano now known as Hanging Rock is an ancient mamelon long sacred to several Aboriginal Australian tribes: the Djadja Wurrung, Wurundjeri, and Taungurong. The rock is believed to have once been an important place for inter-tribal meetings, and may have also served as the demarcation of the place where the tribes’ boundaries met. As English colonialists settled Victoria and its surrounding areas in the mid-19th century, they cruelly brutalized, killed and removed these tribes, many of whom had lived on the land for tens of thousands of years, from their ancestral land. The Aboriginal name for the formation remains uncertain—though some believe that an inscription on the rock reading “Anneyelong” may refer to an indigenous word, perhaps Ngannelong. Settlers renamed the formation Diogenes Mount shortly after their conquest of the area. Its more recognizable contemporary name, Hanging Rock, refers to a distinctive pair of rocks which hang over the path up to the mount’s summit, forming a kind of bridge. Hanging Rock is now a public reserve which charges entry for visitors wishing to visit the site. Many have drawn parallels between the history of Hanging Rock and the history of The Six Grandfathers, or Mount Rushmore—a 20th-century project which saw the faces of four American presidents carved into the side of a sacred mountain in Keystone, South Dakota’s Black Hills, once the territory of the Lakota Sioux. Artists and activists in Australia such as Amy Spiers, creator of the “Miranda Must Go” campaign (a reference to a statue of Joan Lindsay’s character Miranda, one of the lost schoolgirls, which stands at the Hanging Rock Visitor’s Centre) have enacted protests to de-center tourism in the area and reeducate visitors as to the site’s sacredness and significance to Australia’s indigenous people.

Other Books Related to Picnic at Hanging Rock

Picnic at Hanging Rock represents the confluence of several literary and ideological influences in which Joan Lindsay was interested throughout her career as a writer and painter. Lindsay’s first novel, Through Darkest Pondelayo, was a satirical pseudo-travelogue written in an epistolary, or letter-writing, format. In the novel, two English ladies visit an island off the coast of Sri Lanka which is inhabited by cannibals and must face down a series of trials and tribulations. The book, a send-up of sensationalist and racist tropes of the popular autobiographical travel narrative genre, is in many ways an ideological precursor to Picnic at Hanging Rock’s treatment of tourists who visit a sacred indigenous site—and have a very different experience than they’d bargained for. Time and its bizarre, halting flow is also a major motif throughout the novel—Joan Lindsay is said to have been humorously aware throughout her life of the fact that clocks and watches often stopped in her presence, and even wrote an autobiographical account of the early days of her marriage entitled Time Without Clocks. Picnic at Hanging Rock has also influenced a number of contemporary titles including Felicity McLean’s The Van Apfel Girls are Gone, which charts the disappearance of a trio of sisters in the summer of 1992, and Jeffrey Eugenides’s The Virgin Suicides, in which a group of high-school boys find themselves fascinated by an ethereal group of five religious—and suicidal—sisters.
Key Facts about Picnic at Hanging Rock

Let’s Do the Time Warp. Though Joan Lindsay’s editors cut the final chapter of her original draft of Picnic at Hanging Rock, it was published posthumously in a standalone volume. The “hidden” chapter reveals that halfway through their climb up Hanging Rock, Irma, Miranda, and Marion began feeling strange. They watched their math teacher, Greta McCraw, disappear through a crack in the rock after turning into a crablike creature. After taking off their own corsets and throwing them off the side of the rock, the girls watched their corsets suspended in the air for several seconds before following Miss McCraw through the hole. When Irma tried to pass through the hole, it shut before her, and she went temporarily mad. This ending suggests that the rock is home to a kind of time warp or wormhole, a twist which speaks to Lindsay’s own artistic fascination with clocks and time, as well as Aboriginal Australian beliefs about the rock as a sacred place. 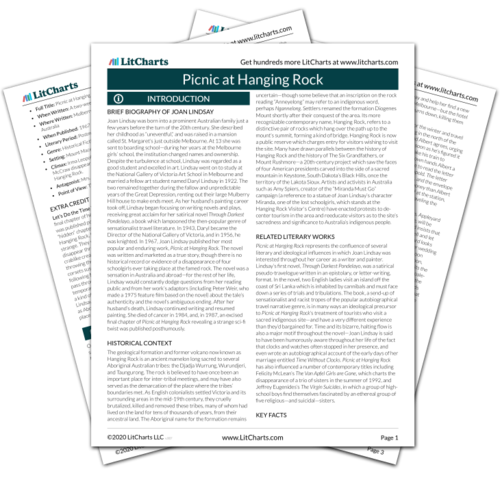 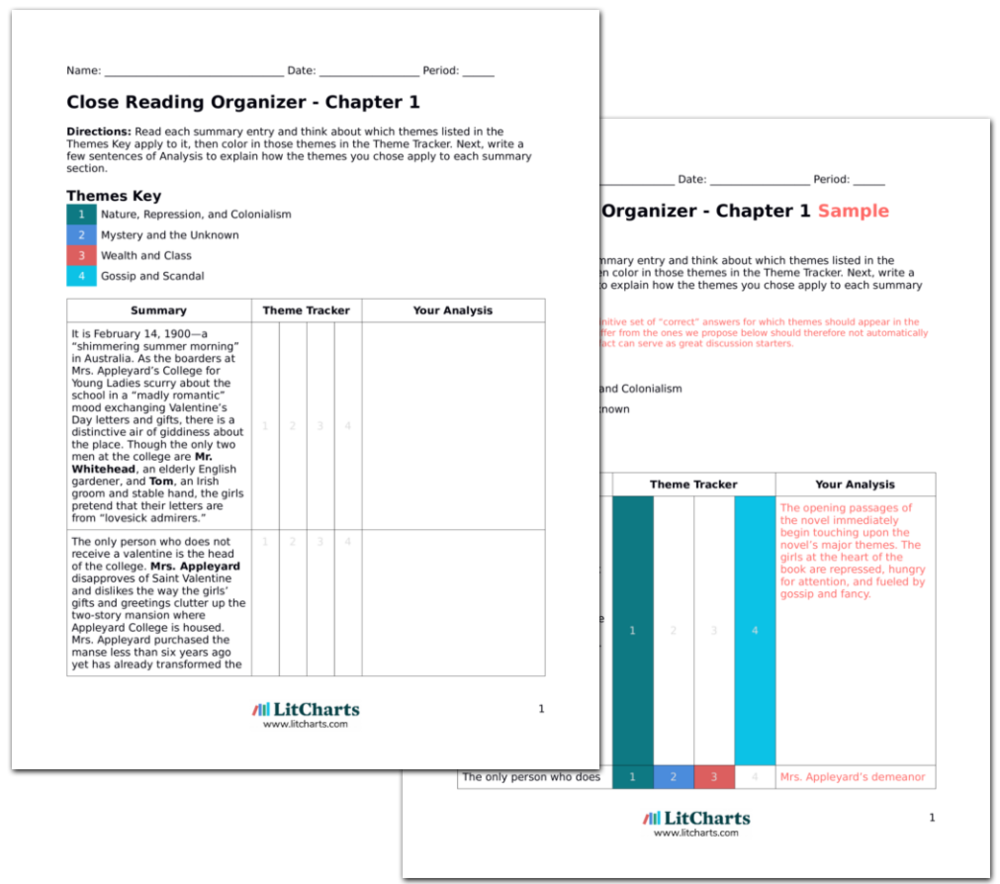