Get LitCharts A+
A sweet but melancholy and easily frightened little girl who lives next door to Abigail, and whom Abigail regularly babysits. It is Natalie who points out the “little furry girl” to Abigail at the playground. Natalie is frightened of the Beatie Bow game, unlike her brother, and prefers to watch the furry girl observe the game. Natalie feels that the little girl is horribly sad. Years after Abigail returns from the past, she visits the Crowns, and it is revealed that Justine—and thus Natalie and Vincent—are descendants of the Bows, and that Natalie is a bearer of the Gift.

The Playing Beatie Bow quotes below are all either spoken by Natalie Crown or refer to Natalie Crown. For each quote, you can also see the other characters and themes related to it (each theme is indicated by its own dot and icon, like this one:

). Note: all page numbers and citation info for the quotes below refer to the Puffin Books edition of Playing Beatie Bow published in 1980.
Chapter 2 Quotes

Her eyes turned instinctively to the corner of the wall where it met the street. There lurked Natalie's little furry girl, looking cold and forlorn.

“She looks the way I feel,” thought Abigail. But how did she feel? Not quite lost but almost. Baffled. A sense of too many strange ideas crowding around her, a feeling of helplessness and difficulty with which she could not come to terms. She thought, “Maybe they're right. Maybe there is such a thing as being too young and inexperienced to know your own mind.”

In a way she felt as she had felt when her father went away and left her. Fright, anger and helplessness, the sense of being nobody who could make things happen. But then she had been only ten. Four years of schooling her face to be expressionless, her thoughts to be her private property, had not gone to waste.

After her first despair, she thought, “I won’t let them beat me. If that dress is hidden around the house I’lI find it. Or I'll bribe Beatie, or coax Judah, into telling me where it is.”

She had learnt a lot about herself in this new rough world. Her own thoughts and conclusions of just a month before filled her with embarrassed astonishment when she reviewed them.

“What a dummo I was! I knew as much about real life as poor little Natty.”

“Natalie has something to do with this, hasn't she,” he pondered. “Because, after all, she's a Bow, and perhaps she has the Gift. And the crochet, because it came from the fingers of that Great-great-great-grandmother Alice from the Orkneys, was just enough to tip you over into the last century. She was right, you know: you were the Stranger of the Prophecy.”

Unlock with LitCharts A+
Get the entire Playing Beatie Bow LitChart as a printable PDF.
"My students can't get enough of your charts and their results have gone through the roof." -Graham S.
Download 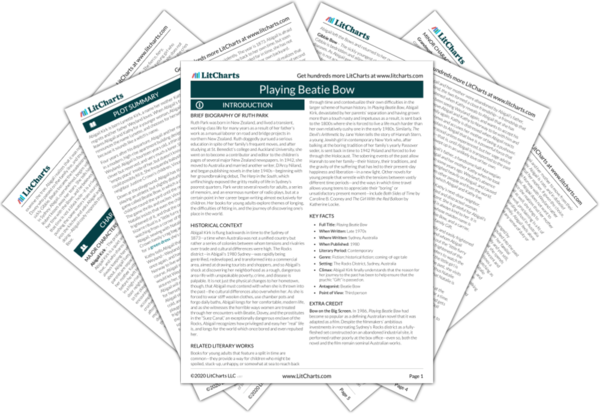 The timeline below shows where the character Natalie Crown appears in Playing Beatie Bow. The colored dots and icons indicate which themes are associated with that appearance.

...and goes to visit the Crowns, her neighbors. Justine Crown is the mother of four-year-old Natalie and six-year-old Vincent. Natalie is sweet, but Vincent is a monster. Abigail feels protective of... (full context)

...children “racing dementedly back and forth,” clearly playing some kind of group game. Abigail asks Natalie if she would like to join the game, but Natalie shakes her head and begins... (full context)

Abigail and Natalie watch the game—a girl stands in the middle of a circle of children, playing the... (full context)

Natalie explains that if the person playing Beatie Bow catches someone, that person then becomes the... (full context)

...him that it is time to go home, and it is already too cold for Natalie. Vincent makes a rude gesture at the two girls and then runs back into the... (full context)

Inside the apartment, Abigail offers to stay until dinner so that she can entertain Natalie while Justine cooks and gets ready for dinner. Justine suggests Abigail help Natalie sew some... (full context)

Abigail and Natalie pick through a bag of fabric, testing swatches against Natalie’s teddy. Abigail tells Natalie about... (full context)

...and offers to take the children to the playground. Justine tells her to just take Natalie—Vincent is ill with a sore throat. When Justine notices Abigail’s dress, she asks her if... (full context)

On the way down to the playground, Natalie tells Abigail that she was able to see the little furry girl on the playground... (full context)

Natalie suggests they go speak to the little girl. As they approach her, Abigail notices that... (full context)

As Abigail listens to Beatie speak, she realizes that Natalie’s belief that the little furry girl was unhappy was true—Abigail wonders if the reason Beatie’s... (full context)

Abigail still takes Natalie and Vincent to the playground sometimes, but the children have given up playing Beatie Bow,... (full context)

...smiles happily, revealing that he does. Justine is happy to see Abigail, too—Abigail asks after Natalie, and Justine tells Abigail that Natalie is out shopping with someone called Robert, as today... (full context)

...asks who Robert is—Justine answers that Robert is her younger brother, and at twenty, is Natalie’s favorite uncle. Justine asks Abigail to tell her about all the affairs she must have... (full context)

As Abigail hugs Natalie, she wonders whether Natalie truly remembers their time together. Just then, Natalie leans in and... (full context)

While Natalie opens her presents with Vincent and her mother, Robert and Abigail talk with one another.... (full context)

...Robert listens to her quite seriously. When she’s done with her tale, Robert insists that Natalie must have had something to do with everything that happened—after all, she is a Bow,... (full context)
Previous
Justine Crown
Previous
Justine Crown
Next
Dorothea “Doll” Victoria Brand
Next
Dorothea “Doll” Victoria Brand
Get LitCharts 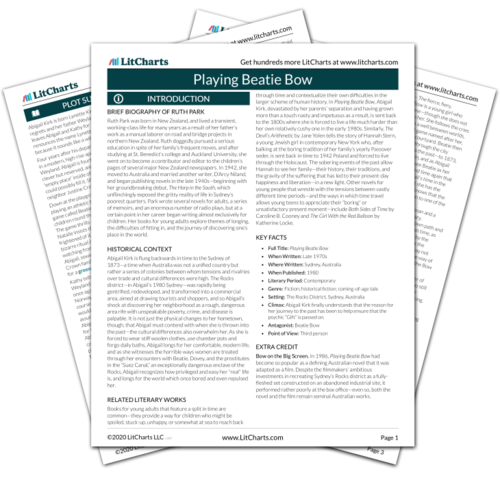 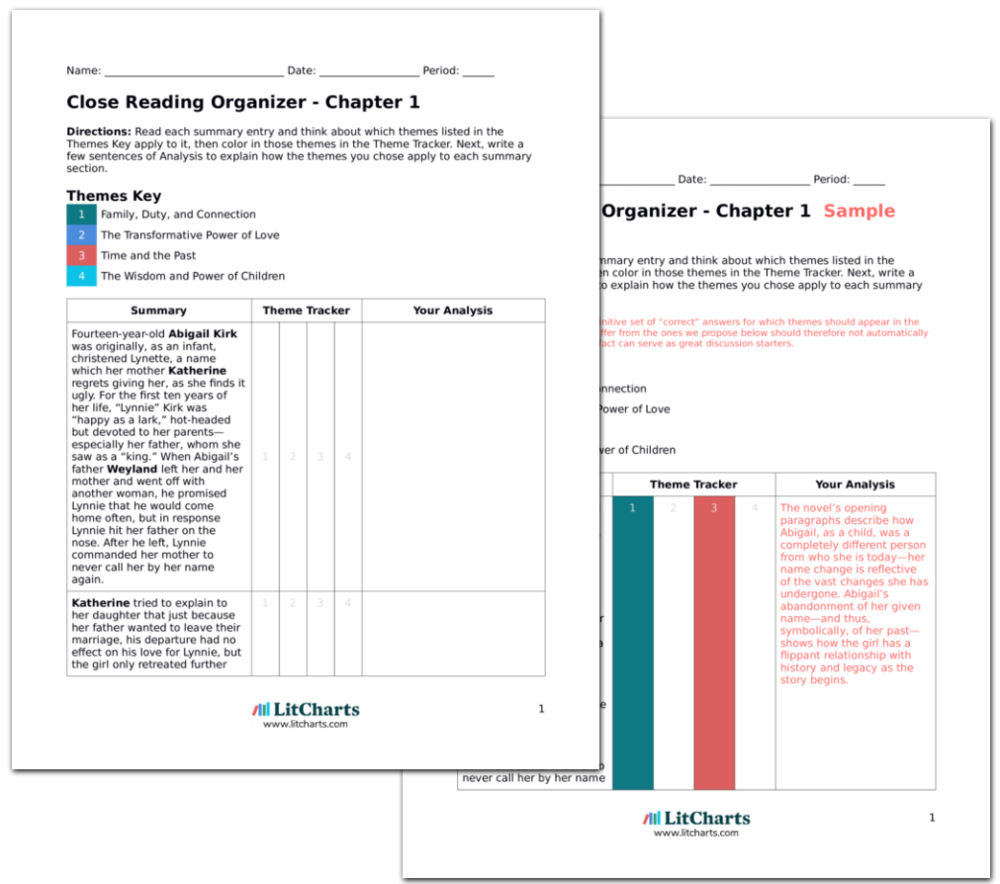