Welcome to the LitCharts study guide on Aristotle's Poetics. Created by the original team behind SparkNotes, LitCharts are the world's best literature guides.

A concise biography of Aristotle plus historical and literary context for Poetics.

A quick-reference summary: Poetics on a single page.

In-depth summary and analysis of every chapter of Poetics. Visual theme-tracking, too.

Explanations of Poetics's symbols, and tracking of where they appear.

An interactive data visualization of Poetics's plot and themes.

Aristotle was born around 384 B.C.E. in Stagira, a village in Central Macedonia in Northern Greece. Not much is known about Aristotle’s mother, Phaestis; however, Aristotle’s father, Nicomachus, was a court physician for the Macedonian King Amyntas II. Both Phaestis and Nicomachus died when Aristotle was an adolescent, and he spent the rest of his childhood under the care of a guardian. When Aristotle was 17 years old, he went to Athens and enrolled in Plato’s Academy, where he lived and studied for nearly 20 years. Aristotle was taught by Plato, who was taught by Socrates before him. Aristotle left the academy around the time Plato died, and he traveled to the island Lesbos to study botany. Here, Aristotle met and married his wife, Pythias, and had a daughter by the same name. Aristotle returned to the Macedonian court around the year 338 B.C.E. and served as personal tutor to Alexander the Great, the future king of Macedonia. During this time, Aristotle taught at the Lyceum, a temple in Athens, where he founded the Peripatetic school of philosophy, which was based on science and inductive reasoning. Aristotle had several prominent students, including Ptolemy, a general under Alexander the Great and the future pharaoh of Egypt. Around 335 B.C.E., Aristotle’s wife, Pythias, died, and he went on to marry his second wife, Herpyllis and have additional children—including a son, Nicomachus, named after Aristotle’s father. 335 to 323 B.C.E. are thought to have been the most productive years of Aristotle’s life. He extensively studied subjects like philosophy, politics, physics, poetry, and biology, and he published over 200 books, likely in manuscript form on papyrus. Thirty-one of Aristotle’s works have survived antiquity, including Poetics, Nicomachean Ethics, Politics, and Rhetoric. In 322 B.C.E, Aristotle died at age 62 of natural causes on the Greek island of Euboea. Aristotle had a profound impact on early thought and philosophy and is often referred to as the “Father of Western Philosophy.” Along with Plato and Socrates, Aristotle pioneered many of the theories and ideas that inform modern economics, politics, ethics, and science.
Get the entire Poetics LitChart as a printable PDF.
"My students can't get enough of your charts and their results have gone through the roof." -Graham S.
Download 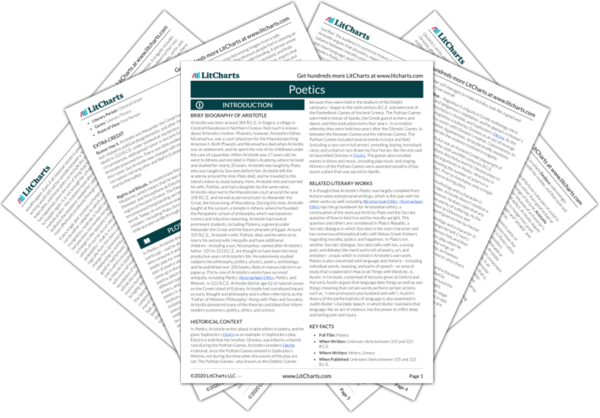 In Poetics, Aristotle writes about irrationalities in poetry, and he gives Sophocles’s Electra as an example. In Sophocles’s play, Electra is told that her brother, Orestes, was killed in a chariot race during the Pythian Games. Aristotle considers Electra irrational, since the Pythian Games existed in Sophocles’s lifetime, not during the time when the events of the play are set. The Pythian Games—also known as the Delphic Games because they were held in the stadium of the Delphi sanctuary—began in the sixth century B.C.E. and were one of the Panhellenic Games of Ancient Greece. The Pythian Games were held in honor of Apollo, the Greek god of archery and dance, and they took place every four years—in a rotation whereby they were held two years after the Olympic Games, in between the Nemean Games and the Isthmian Games. The Pythian Games included several events in track and field (including a race ran in full armor), wrestling, boxing, horseback races, and a chariot race drawn by four horses, like the one said to have killed Orestes in Electra. The games also included events in dance and music, including pipe music and singing. Winners of the Pythian Games were awarded wreaths of bay laurel, a plant that was sacred to Apollo.

Other Books Related to Poetics

It is thought that Aristotle’s Poetics was largely compiled from lecture notes and personal writings, which is the case with his other works as well, including Nicomachean Ethics. Nicomachean Ethics lays the groundwork for Aristotelian ethics, a continuation of the work put forth by Plato and the Socratic question of how to best live and be morally upright. This question and others are considered in Plato’s Republic, a Socratic dialogue in which Socrates is the main character and has numerous philosophical talks with fellow Greek thinkers regarding morality, justice, and happiness. In Plato’s Ion, another Socratic dialogue, Socrates talks with Ion, a young poet, and debates the merit and truth of poetry, art, and imitation—a topic which is visited in Aristotle’s own work. Poetics is also concerned with language and rhetoric—including individual words, meaning, and parts of speech—an area of study that is explored in How to do Things with Words by J.L. Austin. In his book, comprised of lectures given at Oxford and Harvard, Austin argues that language does things as well as says things (meaning that certain words perform certain actions, such as, “I now pronounce you husband and wife”). Austin’s theory of the performativity of language is also examined in Judith Butler’s Excitable Speech, in which Butler maintains that language, like an act of violence, has the power to inflict deep and lasting pain and injury.
Key Facts about Poetics

Rumor Has it. Aristotle and Alexander the Great had a falling out related to political disagreements, and after Alexander’s death in 323 B.C.E. under somewhat mysterious circumstances, widespread rumor in Ancient Greece was that Aristotle poisoned him. There was little evidence to support this rumor, but Aristotle was charged with impiety and moral corruption not long after and fled to Euboea, where he died shortly thereafter.

Rights and Rituals. Aristotle knew the secrets of the Eleusinian Mysteries, which means that he was initiated into the cult of Demeter and Persephone at Eleusis, a town in the West Attica region of Ancient Greece. The Eleusinian Mysteries encompassed longstanding secret religious rites in the ancient world. Today, no one knows exactly what the ritual involved, but initiates—including Plato, Socrates, and Cicero—were said to embrace eternal life through an immortal soul. 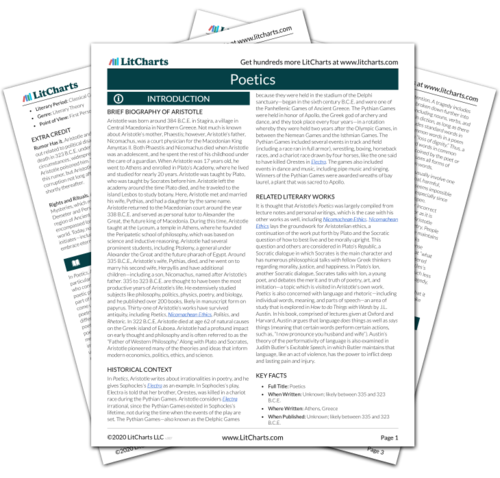 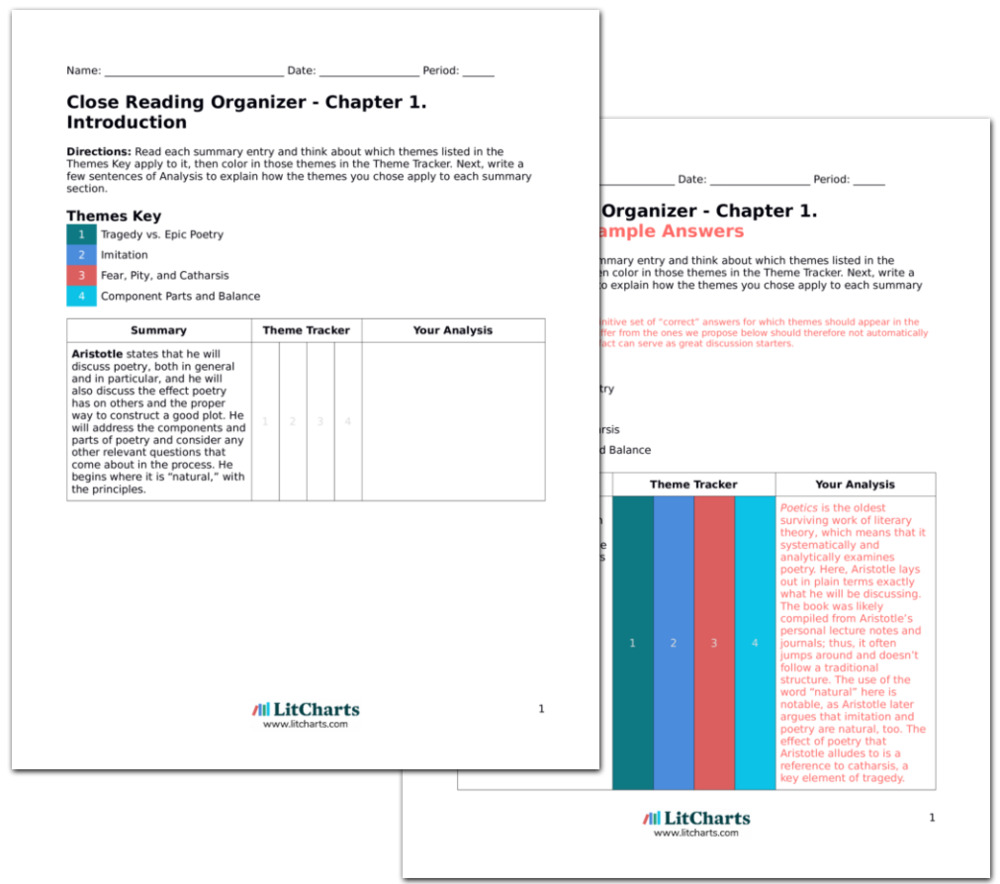