The liver plays an important role in Prometheus Bound, representing Prometheus’s passion—his reason and dedication to the survival of the human race—within Aeschylus’s play. The liver is seen as the source of passion, or emotion, within Greek mythology and is frequently associated with anger and wrath specifically. Bile, which is produced by the liver, is often said to rise in instances of extreme emotion, principally anger. When Prometheus gives fire and reason to humankind, he teaches them many arts and sciences, including the reading of “entrails” as a form of divination and sacrifice to the gods. Prometheus teaches humankind “the necessary color of the gall to please the gods, as well as the mottled splendor of the liver’s lobe.” The liver in particular, the very source of passion and emotion, is preferred by the gods.

Furthermore, the importance of the liver is reflected in Prometheus’s punishment. After Zeus strikes the mountain down around Prometheus, Zeus’s “winged hound, a scarlet eagle,” will “feast upon [Prometheus’s] blackened liver” each day for eternity. Prometheus’s liver will regenerate each night, and the eagle will “feast” again the next day. Not only is this punishment agonizing (and, incidentally, the liver is an organ that can naturally regenerate), it is also a direct insult to Prometheus. Prometheus’s liver, as the source of his passion and reason and, presumably, his own anger at his fate, will be eaten by Zeus’s “winged hound,” a representation of Zeus himself. In this vein, Zeus will consume Prometheus’s own passion and use it against him in the form of Zeus’s never-ending wrath. By eating Prometheus’s liver, Zeus not only destroys Prometheus’s passion but also fuels his own wrath and power, so to speak.

The Liver Quotes in Prometheus Bound

The Prometheus Bound quotes below all refer to the symbol of The Liver. For each quote, you can also see the other characters and themes related to it (each theme is indicated by its own dot and icon, like this one:

Get the entire Prometheus Bound LitChart as a printable PDF.
"My students can't get enough of your charts and their results have gone through the roof." -Graham S.
Download 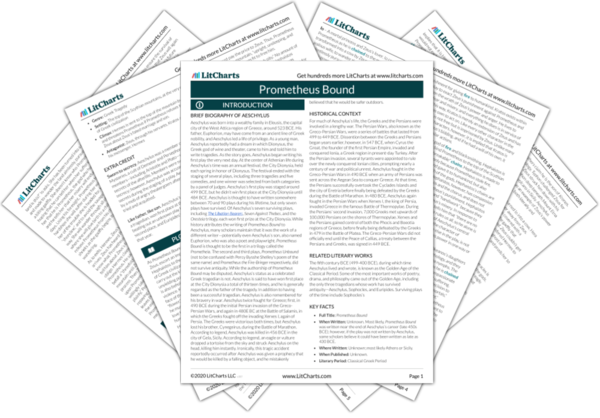 The timeline below shows where the symbol The Liver appears in Prometheus Bound. The colored dots and icons indicate which themes are associated with that appearance.