Download this LitChart! (PDF)
Teachers and parents! Struggling with distance learning? Our Teacher Edition on Raymond’s Run can help.

Welcome to the LitCharts study guide on Toni Cade Bambara's Raymond’s Run. Created by the original team behind SparkNotes, LitCharts are the world's best literature guides.

A concise biography of Toni Cade Bambara plus historical and literary context for Raymond’s Run.

A quick-reference summary: Raymond’s Run on a single page.

In-depth summary and analysis of every of Raymond’s Run. Visual theme-tracking, too.

Explanations of Raymond’s Run's symbols, and tracking of where they appear.

An interactive data visualization of Raymond’s Run's plot and themes.

Toni Cade Bambara, born Miltona Mirkin Cade, spent her childhood in Harlem, Brooklyn, Queens, and New Jersey. She changed her name to Toni at age six, and again in 1970 to add Bambara (a West African ethnic group) after coming across the word in her great-grandmother’s sketchbook. Bambara earned a BA in theater arts and English literature from Queens College in 1959, where she was one of the few non-white students. Bambara had a passion for jazz and was a member of the Dance Club of Queens College. She went on to earn her master’s degree from the City College of New York in 1964. From 1965 through the 1980s, Bambara worked in university outreach programs and taught English, Afro-American Studies, and film-script writing at a variety of universities and institutions, including her own alma mater City College. She was also an artist-in-residence at multiple universities and held lectures at the Library of Congress and the Smithsonian Institution. During the 1960s, Bambara was active in the Black Arts Movement and Black feminism, compiling several anthologies of Black writers and publishing the short story collection Gorilla My Love (in which “Raymond’s Run” appears) in 1972. After publishing several more short stories collections in the 1970s and her novel The Salt Eaters in 1980, Bambara shifted to focus on film and television production. As whole, her body of work is highly political and openly challenges the oppression and injustice that African Americans face. Bambara died of colon cancer in 1995. Her novel These Bones Are Not My Children was published posthumously in 1999.
Get the entire Raymond’s Run LitChart as a printable PDF.
"My students can't get enough of your charts and their results have gone through the roof." -Graham S.
Download 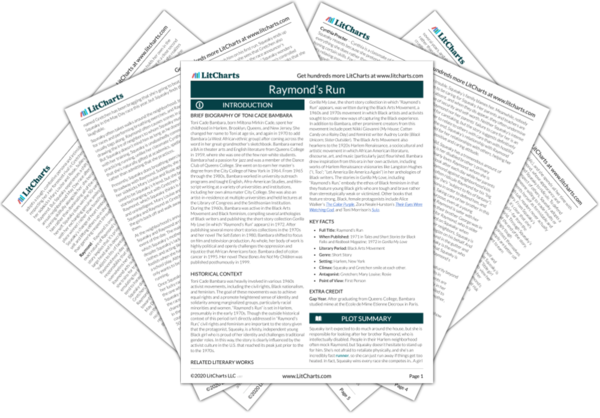 Toni Cade Bambara was heavily involved in various 1960s activist movements, including the civil rights, Black nationalism, and feminism. The goal of these movements was to achieve equal rights and a promote heightened sense of identity and solidarity among marginalized groups, particularly racial minorities and women. “Raymond’s Run” is set in Harlem, presumably in the early 1970s. Though the outside historical context of this period isn’t directly addressed in “Raymond’s Run,” civil rights and feminism are important to the story given that the protagonist, Squeaky, is a feisty, independent young Black girl who is proud of her identity and challenges traditional gender roles. In this way, the story is clearly influenced by the activist culture in the U.S. that reached its peak just prior to the to the 1970s.

Other Books Related to Raymond’s Run

Gorilla My Love, the short story collection in which “Raymond’s Run” appears, was written during the Black Arts Movement, a 1960s and 1970s movement in which Black artists and activists sought to create new ways of capturing the Black experience. In addition to Bambara, other prominent creators from this movement include poet Nikki Giovanni (My House; Cotton Candy on a Rainy Day) and feminist writer Audrey Lorde (Black Unicorn; Sister Outsider). The Black Arts Movement also hearkens to the 1920s Harlem Renaissance, a sociocultural and artistic movement in which African American literature, discourse, art, and music (particularly jazz) flourished. Bambara drew inspiration from this era in her own activism, including works of Harlem Renaissance visionaries like Langston Hughes (“I, Too”; “Let America Be America Again”) in her anthologies of Black writers. The stories in Gorilla My Love, including “Raymond’s Run,” embody the ethos of Black feminism in that they feature young Black girls who are tough and brave rather than stereotypically weak or victimized. Other books that feature strong, Black, female protagonists include Alice Walker’s The Color Purple, Zora Neale Hurston’s Their Eyes Were Watching God, and Toni Morrison’s Sula.
Key Facts about Raymond’s Run 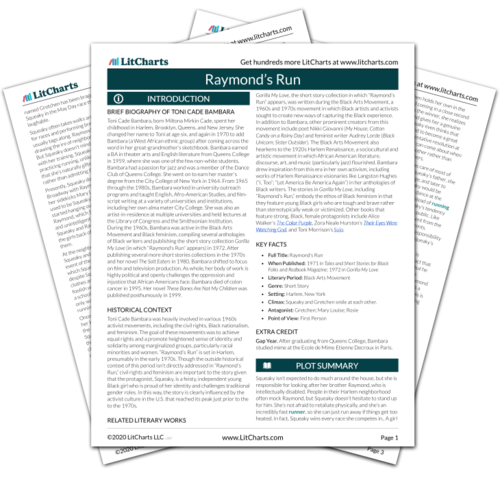 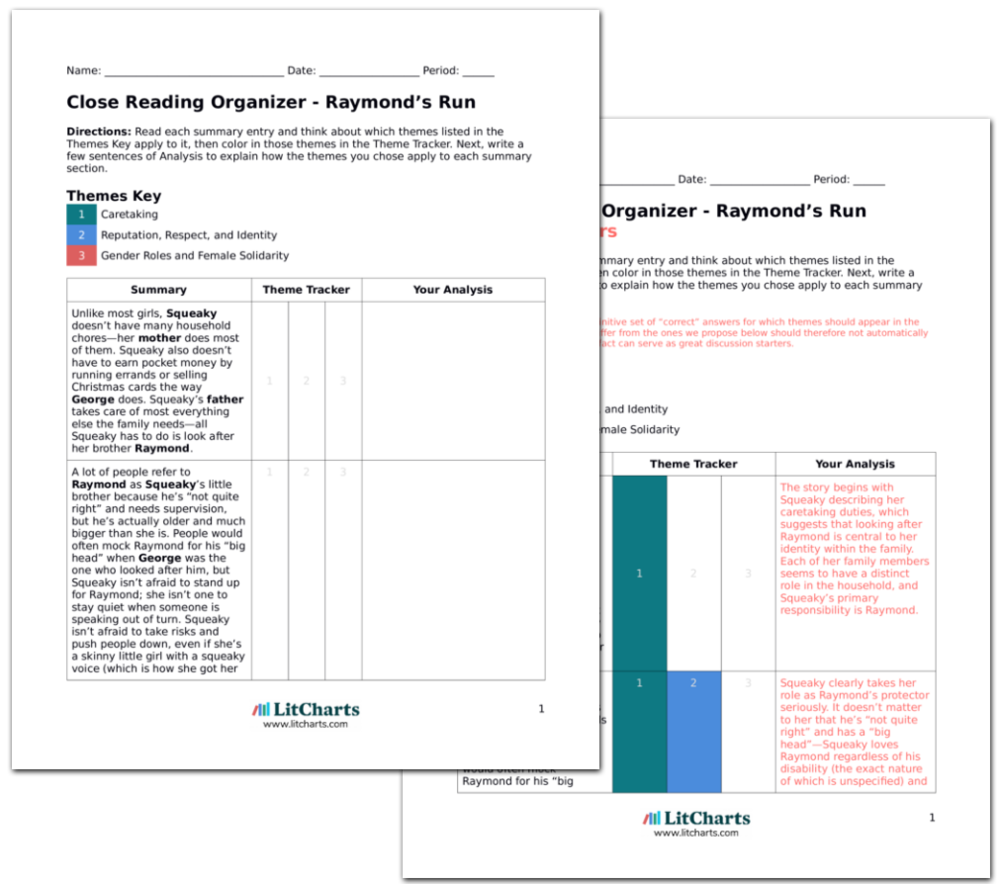