In the second half of the book, it’s revealed that Maxim de Winter killed his first wife, Rebecca, by shooting her, then placing her body in a boat and scuttling it on the beach. It’s then darkly appropriate that the narrator is reminded of Rebecca’s boat after seeing a buoy with the message, “Je reviens,” which means “I’ll return” in French. Just as Rebecca intended all along, the boat returns to Maxim’s life with a vengeance, triggering a renewed investigation of Rebecca’s death, and casting suspicion upon Maxim and the narrator. Rebecca’s boat is a potent symbol of the power of memory and the past: Maxim tries to forget his turbulent marriage with Rebecca, but he’s unable to escape the past so easily.

Get the entire Rebecca LitChart as a printable PDF.
"My students can't get enough of your charts and their results have gone through the roof." -Graham S.
Download 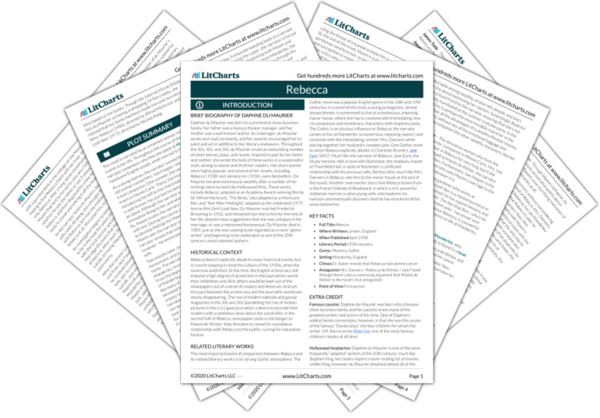 The timeline below shows where the symbol Rebecca’s Boat appears in Rebecca. The colored dots and icons indicate which themes are associated with that appearance.

...Frank how Rebecca died. He explains that she was sailing on the ocean when her boat capsized and sank—Rebecca must have drowned while trying to swim back. It took two months... (full context)

...come back” in French) is written on the buoy. This reminds the narrator of Rebecca’s boat—a boat which did not come back on the day she drowned. (full context)

...that the sailors have discovered something unpleasant beneath their own ship: the hull of the boat that belonged to Rebecca. Furthermore, Searle tells her, the sailors discovered a body inside the... (full context)

...finish—she assumes that Maxim will want to find out who the second person in Rebecca’s boat was. Maxim, his entire body shaking, tells the narrator the truth. Rebecca didn’t die in... (full context)

...listening, Maxim explains what will happen next. The police will identify Rebecca’s body in the boat—her rings, her clothes, etc. As Maxim speaks, the narrator can only think back to what... (full context)

Maxim carries Rebecca’s dead body to the sea, where he throws her in a boat and then sinks the boat. Since then, he’s always known that eventually her boat will... (full context)

...has asked Maxim if he has any idea whose body it could be in the boat. Maxim has answered that he has no idea whatsoever. He’s also told the Colonel that... (full context)

...her—the narrator replies that she doesn’t know. Danvers also asks if the rumors about Rebecca’s boat are true—again, the narrator denies knowing anything. Mrs. Danvers leaves, and the narrator thinks that... (full context)

By evening, there are headlines in every local paper about the discovery of Rebecca’s boat. Frith asks the narrator about the inevitable inquest—he wants to know if the servants will... (full context)

After Tabb stands down, it’s time for Maxim to speak about the boat. Horridge, the coroner, asks him if he knew about the holes drilled in the boat.... (full context)