Download this LitChart! (PDF)
Teachers and parents! Struggling with distance learning? Our Teacher Edition on Refugee can help.

Welcome to the LitCharts study guide on Alan Gratz's Refugee. Created by the original team behind SparkNotes, LitCharts are the world's best literature guides.

A concise biography of Alan Gratz plus historical and literary context for Refugee.

A quick-reference summary: Refugee on a single page.

In-depth summary and analysis of every chapter of Refugee. Visual theme-tracking, too.

Explanations of Refugee's symbols, and tracking of where they appear.

An interactive data visualization of Refugee's plot and themes.

Gratz was born in Knoxville, Tennessee and attended the University of Tennessee to study creative writing. Ten years after graduating, Gratz published his first novel for young readers, Samurai Shortstop. Since then, he has published 15 books for young readers, including several historical fiction works. Refugee spent more than a year on The New York Times bestseller list. Gratz also spent a period of time teaching historical fiction writing in Tokyo and Jakarta. He has written plays, magazine articles, a few television articles, and more than 6,000 radio commercials. Gratz currently lives with his wife and daughter in Asheville, North Carolina.
Get the entire Refugee LitChart as a printable PDF.
"My students can't get enough of your charts and their results have gone through the roof." -Graham S.
Download 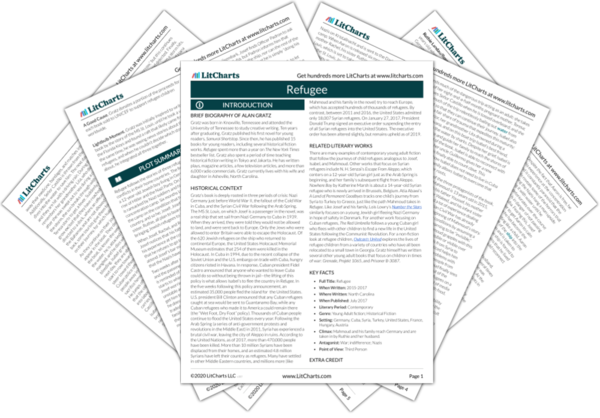 Gratz’s book is deeply rooted in three periods of crisis: Nazi Germany just before World War II, the fallout of the Cold War in Cuba, and the Syrian Civil War following the Arab Spring. The MS St. Louis, on which Josef is a passenger in the novel, was a real ship that set sail from Nazi Germany to Cuba in 1939. When they arrived, they were told they would not be allowed to land, and were sent back to Europe. Only the Jews who were allowed to enter Britain were able to escape the Holocaust. Of the 620 Jewish refugees on the ship who returned to continental Europe, the United States Holocaust Memorial Museum estimates that 254 of them were killed in the Holocaust. In Cuba in 1994, due to the recent collapse of the Soviet Union and the U.S. embargo on trade with Cuba, hungry citizens rioted in Havana. In response, Cuban president Fidel Castro announced that anyone who wanted to leave Cuba could do so without being thrown in jail—the lifting of this policy is what allows Isabel’s to flee the country in Refugee. In the five weeks following this policy announcement, an estimated 35,000 people fled the island for  the United States. U.S. president Bill Clinton announced that any Cuban refugees caught at sea would be sent to Guantanamo Bay, while any Cuban refugees who made it to America could remain there (the “Wet Foot, Dry Foot” policy). Thousands of Cuban people continue to flood the United States every year. Following the Arab Spring (a series of anti-government protests and revolutions in the Middle East) in 2011, Syria has experienced a brutal civil war, leaving the city of Aleppo in ruins. According to the United Nations, as of 2017, more than 470,000 people have been killed. More than 10 million Syrians have been displaced from their homes, and an estimated 4.8 million Syrians have left their country as refugees. Many have settled in other Middle Eastern countries, and millions more (like Mahmoud and his family in the novel) try to reach Europe, which has accepted hundreds of thousands of refugees. By contrast, between 2011 and 2016, the United States admitted only 18,007 Syrian refugees. On January 27, 2017, President Donald Trump signed an executive order suspending the entry of all Syrian refugees into the United States. The executive order has been altered slightly, but remains upheld as of 2019.

Other Books Related to Refugee

There are many examples of contemporary young adult fiction that follow the journeys of child refugees analogous to Josef, Isabel, and Mahmoud. Other works that focus on Syrian refugees include N. H. Senzai’s Escape From Aleppo, which centers on a 12-year-old Syrian girl just as the Arab Spring is beginning, and her family’s subsequent flight from Aleppo. Nowhere Boy by Katherine Marsh is about a 14-year-old Syrian refugee who is newly arrived in Brussels, Belgium. Atia Abawi’s A Land of Permanent Goodbyes tracks one child’s journey from Syria to Turkey to Greece, just like the path Mahmoud takes in Refugee. Like Josef and his family, Lois Lowry’s Number the Stars similarly focuses on a young Jewish girl fleeing Nazi Germany in hope of safety in Denmark. For another work focusing on Cuban refugees, The Red Umbrella follows a young Cuban girl who flees with other children to find a new life in the United States following the Communist Revolution. For a non-fiction look at refugee children, Outcasts United explores the lives of refugee children from a variety of countries who have all been relocated to a small town in Georgia. Gratz himself has written several other young adult books that focus on children in times of war: Grenade, Projekt 1065, and Prisoner B-3087.
Key Facts about Refugee

A Good Cause. Gratz donates a portion of the proceeds for each book sold to UNICEF to support refugee children worldwide.

Lightbulb Moment. Gratz was initially inspired to write the book by the story of the MS St. Louis, until he took a vacation to the Florida Keys and found a raft that likely came from Cuba. At the same time, he was seeing news stories about the Syrian refugees, and when he couldn’t decide which story to write about, he integrated all three together. 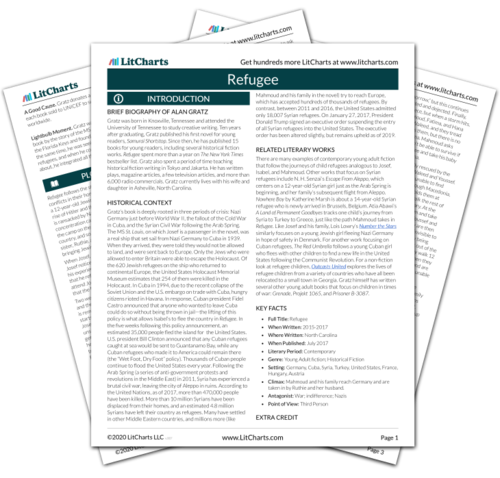 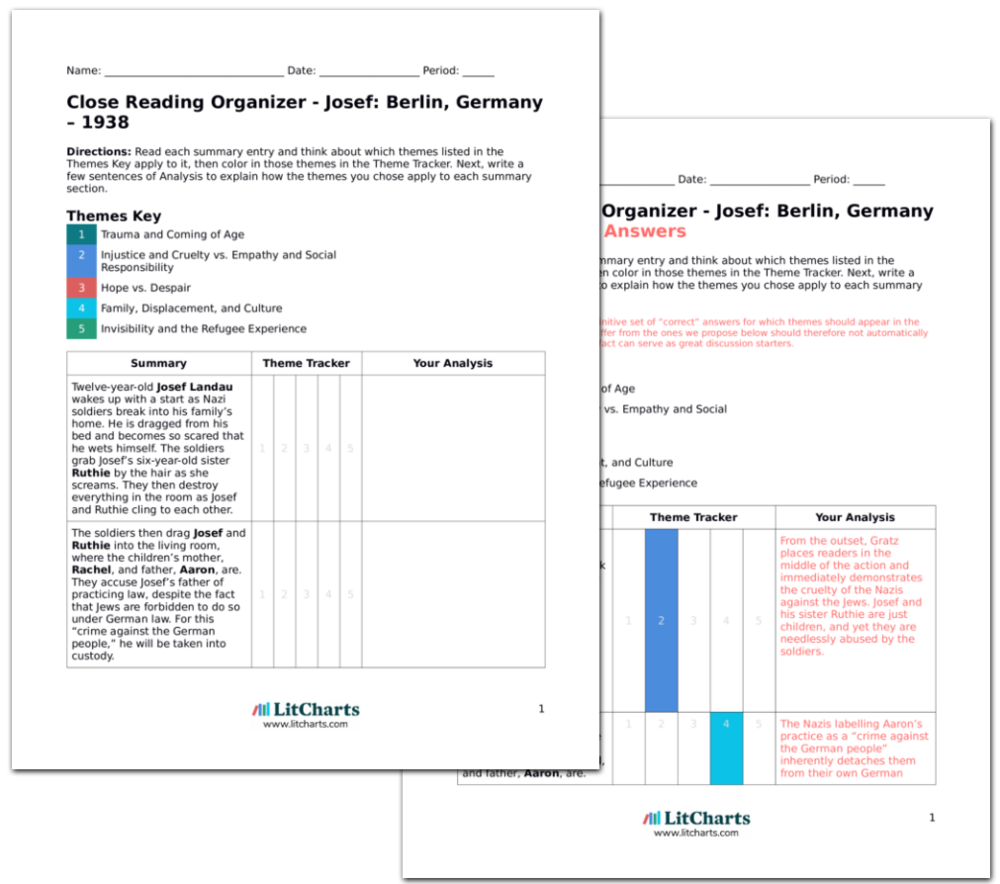