Download this LitChart! (PDF)
Teachers and parents! Struggling with distance learning? Our Teacher Edition on Regeneration can help.

Welcome to the LitCharts study guide on Pat Barker's Regeneration. Created by the original team behind SparkNotes, LitCharts are the world's best literature guides.

A concise biography of Pat Barker plus historical and literary context for Regeneration.

A quick-reference summary: Regeneration on a single page.

In-depth summary and analysis of every chapter of Regeneration. Visual theme-tracking, too.

Explanations of Regeneration's symbols, and tracking of where they appear.

An interactive data visualization of Regeneration's plot and themes.

Pat Barker was born in 1943 in Yorkshire. Barker’s mother became pregnant after a night of drinking, so not only was her father unknown to her for her entire life, but her mother hid the fact that Barker was her illegitimate child (since illegitimacy was seen as shameful at the time) by claiming that her daughter was actually a much younger sister. Barker spent her whole childhood living with her grandparents whom she loved, even after her mother remarried and moved away. Her grandparents owned a small restaurant which eventually went under and they were desperately poor. Even so, Barker earned a position at a well-regarded grammar school as a child and pursued her education. Barker eventually studied international history at the London School of Economics, earning her degree in 1965. Around this time, Barker started writing fiction as well, though she would later regard what she produced as weak, dainty attempts. In 1969, Barker met her future husband, an academic 20 years older than her, who left his wife to marry Pat instead, though they were not legally married for another ten years, after they’d had two children together. In the early 1970s, Barker wrote her first critical success, Union Street, an anthology of seven women’s stories tied together by poverty and domestic violence. However, she struggled to get it published for ten years, as most publishing houses thought it too dark for mainstream appeal. However, when a fellow female author directed her to the feminist publishing house Virago, the novel went on to critical success in 1982 and remains the publisher’s best-selling piece. In the 1990s, although she was often labeled a feminist author, Barker created the Regeneration Trilogy about men and masculinity during wartime, starting with Regeneration in 1991. This trilogy also enjoyed critical success, with one of the novels winning the prestigious Man Booker Prize and another of them shortlisted for it. Barker became a widow in 2009. Her daughter Anna Barker Ralph followed in Barker’s footsteps and became a novelist herself.
Get the entire Regeneration LitChart as a printable PDF.
"My students can't get enough of your charts and their results have gone through the roof." -Graham S.
Download 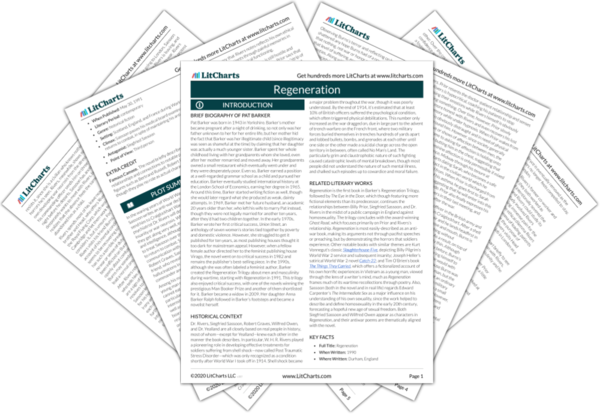 Dr. Rivers, Siegfried Sassoon, Robert Graves, Wilfred Owen, and Dr. Yealland are all closely based on real people in history, most of whom—except for Yealland—knew each other in the manner the book describes. In particular, W. H. R. Rivers played a pioneering role in developing effective treatments for soldiers suffering from shell shock—now called Post Traumatic Stress Disorder—which was only recognized as a condition shortly after World War I took off in 1914. Shell shock became a major problem throughout the war, though it was poorly understood. By the end of 1914, it’s estimated that at least 10% of British officers suffered the psychological condition, which often triggered physical debilitations. This number only increased as the war dragged on, due in large part to the advent of trench warfare on the French front, where two military forces buried themselves in trenches hundreds of yards apart and lobbed bullets, bombs, and grenades at each other until one side or the other made a suicidal charge across the open territory in between, often called No Man’s Land. The particularly grim and claustrophobic nature of such fighting caused catastrophic levels of mental breakdown, though most people did not understand the nature of such mental illness, and chalked such episodes up to cowardice and moral failure.

Other Books Related to Regeneration

Regeneration is the first book in Barker’s Regeneration Trilogy, followed by The Eye in the Door, which though featuring more fictional elements than its predecessor, continues the relationships between Billy Prior, Siegfried Sassoon, and Dr. Rivers in the midst of a public campaign in England against homosexuality. The trilogy concludes with the award-winning Ghost Road, which focuses primarily on Prior and Rivers’s relationship. Regeneration is most easily-described as an anti-war book, making its arguments not through pacifist speeches or preaching, but by demonstrating the horrors that soldiers experience. Other notable books with similar themes are Kurt Vonnegut’s classic Slaughterhouse-Five, depicting Billy Pilgrim’s World War 2 service and subsequent insanity; Joseph Heller’s satirical World War 2 novel Catch-22; and Tim O’Brien’s book The Things They Carried, which offers a fictionalized account of his own horrific experiences in Vietnam as a young man, viewed through the lens of a writer’s mind, much as Regeneration frames much of its wartime recollections through poetry. Also, Sassoon (both in the novel and in real life) regards Edward Carpenter’s The Intermediate Sex as a major influence on his understanding of his own sexuality, since the work helped to describe and define homosexuality in the early 20th century, forecasting a hopeful new age of sexual freedom. Both Siegfried Sassoon and Wilfred Owen appear as characters in Regeneration, and their antiwar poems are thematically aligned with the novel.
Key Facts about Regeneration

Famous Cameos. The novel briefly describes Sassoon’s real-life relationships and connections to notable pacifist and literary figures such as Bertrand Russell, Robert Ross, and Oscar Wilde, though they play no role as actual characters in the book. 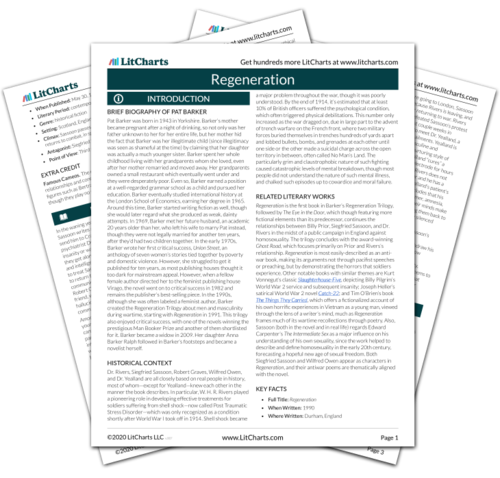 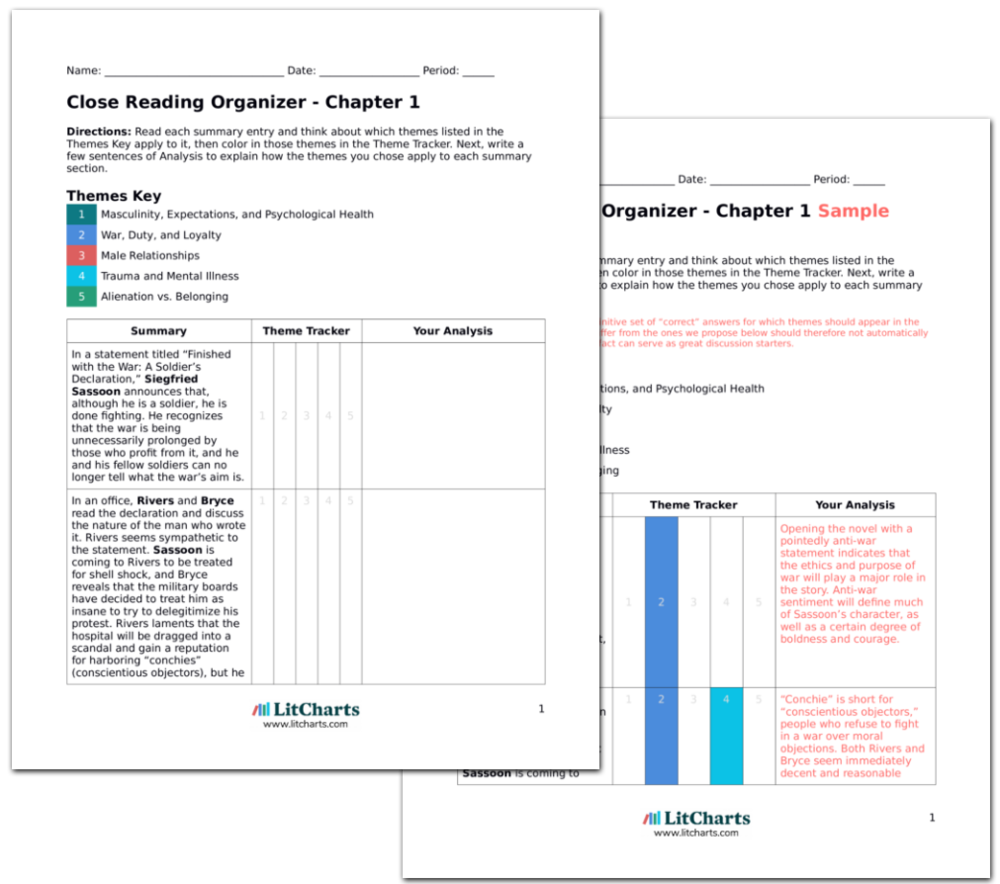