Download this LitChart! (PDF)
Teachers and parents! Struggling with distance learning? Our Teacher Edition on Remembering Babylon can help.

Welcome to the LitCharts study guide on David Malouf's Remembering Babylon. Created by the original team behind SparkNotes, LitCharts are the world's best literature guides.

A concise biography of David Malouf plus historical and literary context for Remembering Babylon.

A quick-reference summary: Remembering Babylon on a single page.

In-depth summary and analysis of every chapter of Remembering Babylon. Visual theme-tracking, too.

Explanations of Remembering Babylon's symbols, and tracking of where they appear.

An interactive data visualization of Remembering Babylon's plot and themes.

David Malouf was born in Brisbane in 1934, one of two children to a Lebanese father and an English-Jewish mother. Malouf was a prolific reader as a child, absorbing such sophisticated classics as Emily Brontë’s Wuthering Heights by age 12. He studied at University of Queensland, which he graduated from in 1955, and became a lecturer, working first in Australia before relocating to London to teach at Holland Park and later Birkenhead. In 1968, Malouf returned to his home country, lecturing for another ten years at the University of Sydney before becoming a full-time writer in 1978. His first novel, Johnno, a semi-autobiographical novel about boyhood in Brisbane, was published in 1975 and later adapted for theater in 2004. Malouf went on to publish several more award-winning novels and novellas about Australia during both World Wars, and he also worked on several plays and theater productions in the 1980s. In 1993, Malouf published Remembering Babylon, winning the Commonwealth Writers’ Prize among others and making the short-list for the prestigious Booker Prize. Malouf was awarded the Lloyd O’Neil Award in 2008 in recognition of his outsize contributions to Australian literature and publishing, and in the same year he was made a Fellow of the Royal Society of Literature, based in London. Although in 2018 Malouf announced he was done writing—at least fiction and memoirs—his prolific career as an author has covered the gamut of fiction, non-fiction, memoirs, plays, poetry, and even the lyrics for several operas. Malouf still lives in Sydney and enjoys his privacy.
Get the entire Remembering Babylon LitChart as a printable PDF.
"My students can't get enough of your charts and their results have gone through the roof." -Graham S.
Download 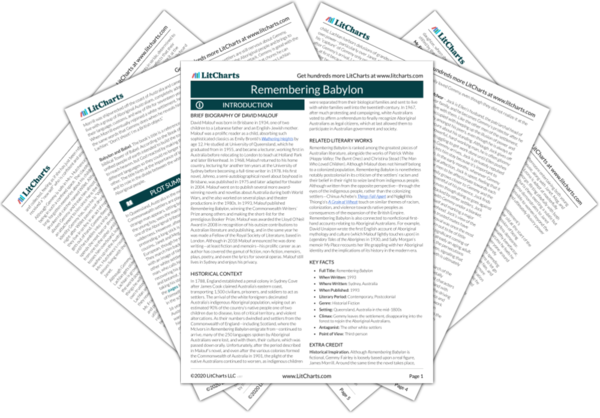 In 1788, England established a penal colony in Sydney Cove after James Cook claimed Australia’s eastern coast, transporting 1,500 civilians, prisoners, and soldiers to act as settlers. The arrival of the white foreigners decimated Australia’s indigenous Aboriginal population, wiping out an estimated 90% of the country’s native people one of two children due to disease, loss of critical territory, and violent altercations. As their numbers dwindled and settlers from the Commonwealth of England—including Scotland, where the McIvors in Remembering Babylon emigrate from—continued to arrive, many of the 250 languages spoken by Aboriginal Australians were lost, and with them, their culture, which was passed down orally. Unfortunately, after the period described in Malouf’s novel, and even after the various colonies formed the Commonwealth of Australia in 1901, the plight of the native Australians continued to worsen, as indigenous children were separated from their biological families and sent to live with white families well into the twentieth century. In 1967, after much protesting and campaigning, white Australians voted to affirm a referendum to finally recognize Aboriginal Australians as legal citizens, which at last allowed them to participate in Australian government and society.

Other Books Related to Remembering Babylon

Remembering Babylon is ranked among the greatest pieces of Australian literature, alongside the works of Patrick White (Happy Valley; The Burnt Ones) and Christina Stead (The Man Who Loved Children). Although Malouf does not himself belong to a colonized population, Remembering Babylon is nonetheless notably postcolonial in its criticism of the settlers’ racism and their belief in their right to seize land from indigenous people. Although written from the opposite perspective—through the eyes of the indigenous people, rather than the colonizing settlers—Chinua Achebe’s Things Fall Apart and Ngũgĩ Wa Thiong’o’s A Grain of Wheat touch on similar themes of racism, colonization, and violence towards native peoples as consequences of the expansion of the British Empire. Remembering Babylon is also connected to nonfictional first-hand accounts relating to Aboriginal Australians. For example, David Unaipon wrote the first English account of Aboriginal mythology and culture (which Malouf lightly touches upon) in Legendary Tales of the Aborigines in 1930, and Sally Morgan’s memoir My Place recounts her life grappling with her Aboriginal identity and the implications of its history in the modern era.
Key Facts about Remembering Babylon

Historical Inspiration. Although Remembering Babylon is fictional, Gemmy Fairley is loosely based upon a real figure, James Morrill. Around the same time the novel takes place, Morrill was shipwrecked off the coast of Australia and came to live with a group of Aboriginal Australians, completely adopting their language, customs, and way of life for seventeen years. When Morrill eventually rejoined a white settlement, he spoke the same words that Gemmy does when he reveals himself to Lachlan: “Don’t shoot! I’m a British object.”

Babylon and Babel. The book’s title is a reference to the biblical Tower of Babel. According to the Book of Genesis, the unified people of earth intended to build the tower high enough to reach heaven, but God reacted by making them all speak different languages so they could no longer understand each other. The title hints at the importance of language in the novel and its role in the divide between the white settlers and the Aboriginal people. 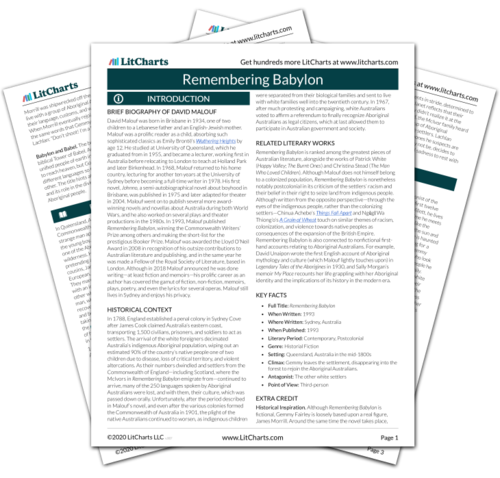 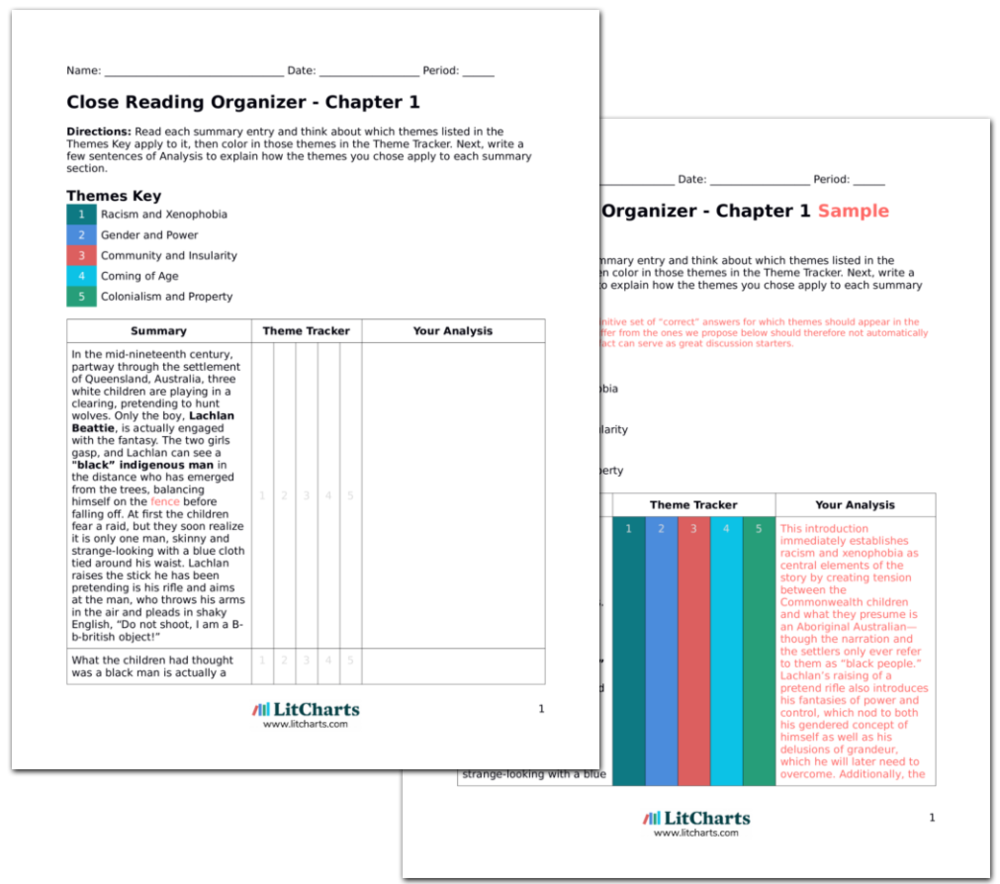