In the world of “‘Repent, Harlequin!’ Said the Ticktockman,” society’s extreme emphasis on timekeeping and orderliness has resulted in an obedient, conformist population in which people rarely distinguish themselves from one another. One notable exception, however, is the Harlequin, so named for his jester-like costume. The Harlequin not only flouts the rigid schedules of the Ticktockman—an authority with the power to “turn off,” i.e. kill, those who fail to be on time—but also actively engages in defiance and disruption of this system, despite the potentially fatal consequences. Through the character of the Harlequin, Ellison emphasizes the importance of individuality as an act of resistance in an intensely homogenous, totalitarian world.

Time and tardiness represent the ultimate manifestation of conformity or lack thereof in the story. Ellison uses these examples to highlight the way in which any sign of individuality, however innocuous, is punished in a totalitarian society. In one example, Gerold Atterly is suspended from school not because of poor grades or bad behavior, but because he is habitually late. Here Ellison emphasizes the fact that any positive qualities a person might have don’t necessarily outweigh the consequences of individualism; Gerold is an excellent student, but that doesn’t matter to the Ticktockman. His parents receive a stern letter informing them that Gerold will be suspended unless “some more reliable method can be instituted guaranteeing he will arrive at his classes on time. […] his constant flouting of the schedules of this school makes it impractical to maintain him in a system where the other children seem capable of getting where they are supposed to be on time and so it goes.” Individuality is thus presented as being distinctly harmful to others. That the Harlequin is a distinct personality, then, is not just an unusual quirk; it’s actively disruptive and unacceptable to a society that relies upon the predictability of conformity in order to function.

The Harlequin’s nonconformity is reflected directly in his appearance: he wears full “motley” (a traditional medieval fool’s costume), has a “thatch” of auburn hair, and his “elfin grin” has “a tooth missing back there on the left side.” He makes exaggerated facial expressions as he effectively pranks his fellow citizens—“inserting thumbs into large ears,” sticking out his tongue, and rolling his eyes as he drops a mass of colorful jelly beans on the unsuspecting commuters below (which he alternately refers to as ants or maggots).

Most offensive in this world, of course, is the fact that the Harlequin is perpetually late—which at first seems not a deliberate intention but a natural inclination; that is, merely a mark of who he is as a person. He is unable to conform even in his personal relationships, made evident in his conversations with his partner Pretty Alice. The Harlequin is habitually tardy with Alice, marking himself as different even when he doesn’t mean to. For instance, after she scolds him for telling her when he’ll be home given that he knows he’s always late, the Harlequin thinks to himself, “I’ll be late. I’m always late. Why do I tell her these dumb things?” Alice further laments that the Harlequin (whose real name is Everett C. Marm) speaks “with a great deal of inflection”—another indicator of his individuality.

Because he is never able to assimilate into the militantly timely society of the Ticktockman, the Harlequin is an outcast and de facto rebel almost by necessity. In such a conformist society, the story thus suggests, even the simple assertion of individuality is an act of resistance. Indeed, the narrator states early in the story that the Harlequin “had become a personality, something they had filtered out of the system many decades before,” adding, “He was considered a Bolivar; a Napoleon; a Robin Hood; a Dick Bong (Ace of Aces); a Jesus; a Jomo Kenyatta.” The narrator thus emphasizes the Harlequin’s status as a singular shaper of history, and immensely influential man whose assertion of a belief—in this instance, merely the fact that people are not meant to live their lives by an inflexible schedule—can inspire the masses.

Indeed, when the Ticktockman has caught Harlequin and is interrogating him, the Ticktockman says that “most people enjoy order,” implying that it’s normal to conform, not the other way around. Harlequin resists this argument, however, insisting that he and most people he knows would rather be individuals than adhere to an imposed and artificial regimen. And when the Ticktockman accuses him of being “a non-conformist,” the Harlequin simply responds, “That didn't used to be a felony,” going on to express his hatred for the “terrible world” that now surrounds him.

By exploring the conflict between conformity and individuality, Ellison highlights the ways in which the Harlequin’s defiance is disruptive to the society in which he lives, and the extent to which totalitarian states rely on conformity in order to maintain the status quo. The narration of the story itself displays many idiosyncratic or unusual elements, further emphasizing the value of refusing to conform to arbitrary norms. These include a lengthy exposition on jelly beans, which is mostly run-on sentences and flouts many common stylistic rules, and which mirrors the way that the jelly beans within the story itself disrupt the rigid schedule of the factory workers. The story is also told in a mix of styles and begins in the middle before jumping to the beginning and then the end, again illustrating a refusal to obey the so-called “rules” of storytelling. Finally, the narrator frequently breaks the fourth wall to address the reader directly, encouraging them to think critically about the contents of the story and the medium itself—underscoring its status as a tale of warning about the perils of conformity. 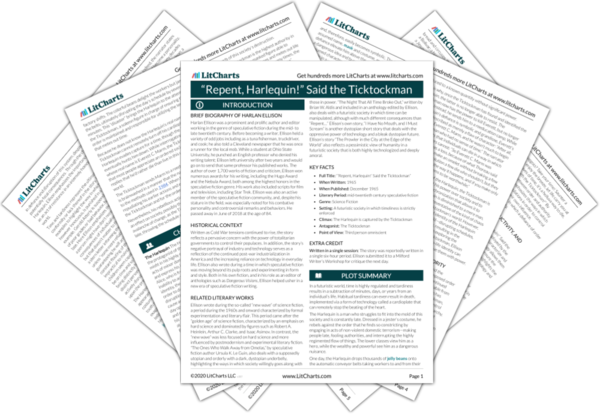 Individuality and Resistance Quotes in “Repent, Harlequin!” Said the Ticktockman

He had become a personality, something they had filtered out of the system many decades before. But there it was, and there he was, a very definitely imposing personality. In certain circles—middle-class circles—it was thought disgusting. Vulgar ostentation. Anarchistic. Shameful.

And at the top—where, like socially-attuned Shipwreck Kellys, every tremor and vibration threatens to dislodge the wealthy, powerful, and titled from their flagpoles—he was considered a menace; a heretic; a rebel; a disgrace; a peril.

But down below, ah, down below, where the people always needed their saints and sinners, their bread and circuses, their heroes and villains, he was considered a Bolivar; a Napoleon; a Robin Hood; a Dick Bong (Ace of Aces); a Jesus; a Jomo Kenyatta.

After all, his name was Everett C. Marm, and he wasn't much to begin with, except a man who had no sense of time.

“Not everyone thinks so. Most people enjoy order.”