Get LitCharts A+
LitCharts assigns a color and icon to each theme in Richard II, which you can use to track the themes throughout the work.

At the center of Richard II, as in many other Shakespeare plays, is a family drama. Many characters are related to one another, and family obligations are constantly pitted against religious and moral duties. However, as is also common in Shakespeare, the family drama is elevated to a royal family drama, raising the stakes of the “domestic” conflict. One’s obligation to King Richard can be doubled, for example, if one is both a subject and a cousin to the king. These raised stakes lead to political motivations, which in turn cause people to act towards their families in ways they otherwise might not. Henry’s accusation of Mowbray at the beginning of the play, for example, is centered on the murder of Henry’s uncle (and Gaunt’s brother) the Duke of Gloucester. The irony here (exposed explicitly in the following scene) is that Richard himself is known to have been involved with Gloucester’s murder, despite the fact that Gloucester was his uncle. (We can note, however, that Richard also seems swayed by family ties, as he gives Henry a lighter sentence than Mowbray for no apparent reason other than the fact that the two are cousins.)

Gloucester’s murder looms over the play, and it’s the knowledge of Richard’s involvement that prompts the Duchess of Gloucester, the Duke’s widow, to plead with Gaunt to act against Richard. In order to appeal to him, she appeals to the obligations of brotherhood, saying that it should spur him to action. Gloucester, like Gaunt himself, carried Edward III’s sacred blood, and the Duchess says that the blood of a brother spilled is equivalent to Gaunt’s own blood being spilled. They shared the same blood and a birth from the same mother, and so they also share a death. The Duchess means this figuratively, but also literally, as she believes that by not resisting Gloucester’s killer, Gaunt opens himself to assassination. And though Gaunt feels this strong obligation to answer the call of brotherhood, for him the obligations of honor and of religion are stronger. Thus, though he suspects Richard of murdering his brother, he will not challenge the king for fear of challenging and blaspheming God.

Within Richard II we can also note a preview of the family relationship that will be central to Henry IV 1 and 2: the relationship between fathers and sons. In the first act, Henry laments that he might appear upset in his father’s sight, which would be a great dishonor. Henry has the full support of Gaunt and the utmost desire to impress and honor him. Likewise, Gaunt says that the banishment of Henry destroyed his life (even though we should note that he encouraged the banishment so as to appear impartial, again putting religious / royal duty above his family commitment). And, indeed, Gaunt will become deathly ill, criticize Richard for murdering his grandfather’s son (i.e. his uncle Gloucester), and die almost immediately after Henry’s banishment. The stress on this father-son relationship foreshadows that of Henry IV with his own son, Prince Hal, the prodigal miscreant who in later plays will ultimately become King Henry V.

Below you will find the important quotes in Richard II related to the theme of Family.
Act 1, Scene 1 Quotes

Finds brotherhood in thee no sharper spur?
Hath love in thy old blood no living fire?
Edward's seven sons, whereof thyself art one,
Were as seven vials of his sacred blood,
Or seven fair branches springing from one root.
…
Ah, Gaunt, his blood was thine! That bed, that womb,
That metal, that self mold that fashioned thee
Made him a man; and though thou livest and breathest,
Yet art thou slain in him.

Shorten my days thou canst with sullen sorrow,
And pluck nights from me, but not lend a morrow.
Thou canst help time to furrow me with age,
But stop no wrinkle in his pilgrimage,
Thy word is current with him for my death,
But dead, thy kingdom cannot buy my breath.

O, but they say the tongues of dying men
Enforce attention like deep harmony.
Where words are since, they are seldom spent in vain,
For they breathe truth that breathe their words in pain.
He that no more must say is listened more
Than they whom youth and ease have taught to gloze.

Alack the heavy day,
That I have worn so many winters out
And know not now what name to call myself.
O, that I were a mockery king of snow
Standing before the sun of Bolingbroke,
To melt myself away in water drops.—

Can no man tell me of my unthrifty son?
'Tis full three months since I did see him last.
If any plague hang over us, 'tis he.
I would to God, my lords, he might be found.
Inquire at London, 'mongst the taverns there,
For there, they say, he daily doth frequent
With unrestrainéd loose companions,
…
Yet through both
I see some sparks of better hope, which elder years
May happily bring forth.

They love not poison that do poison need,
Nor do I thee. Though I did wish him dead,
I hate the murderer, love him murdered.
The guilt of conscience take thou for thy labor,
But neither my good word nor princely favor.
…
I’ll make a voyage to the Holy Land
To wash this blood off from my guilty hand. 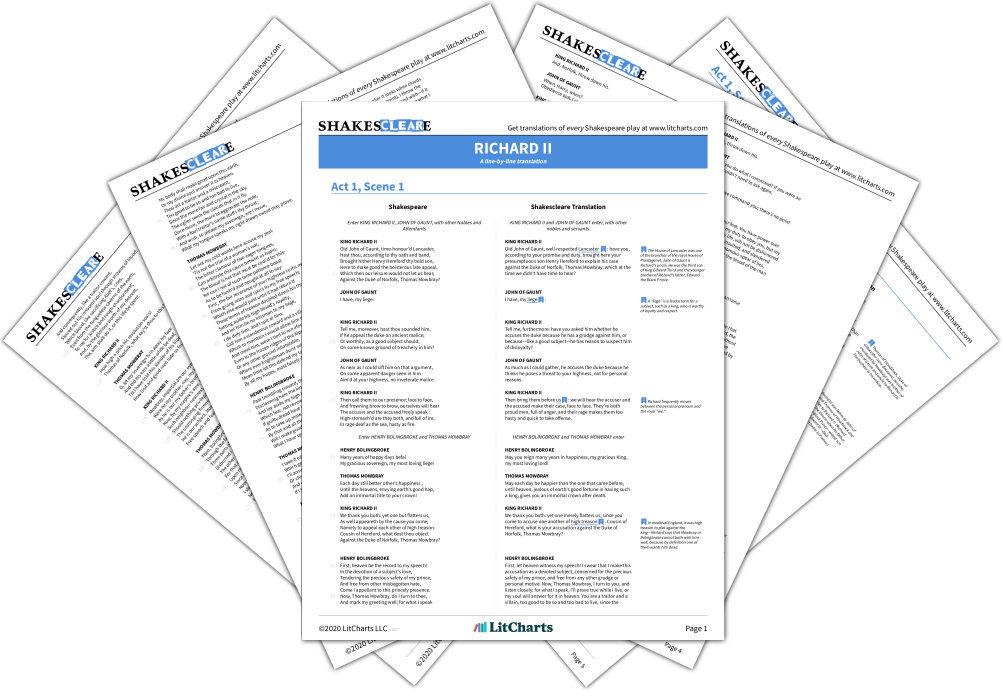