Beth and Rachel’s letters and cards represent their struggle to bridge the vast mental, emotional, and geographical distances that separate them. As adults, they move to different cities and get caught up in different worlds: Rachel dedicates herself to her work, and Beth to riding the buses. For years, they don’t see each other—although they try to stay in touch. Since they struggle to keep up conversations on the phone, they write letters instead. Every week, Rachel writes Beth one neat, formally written card, while Beth sends Rachel about a dozen short notes, erratically scribbled in magic marker and covered in stickers. Needless to say, these different approaches capture their opposite personalities and communication styles, but they manage to understand each other nonetheless.

Eventually, when Rachel concludes that the letters are a poor substitute for an actual relationship with Beth, she decides to actually visit Beth. Yet, during the year Rachel chronicles in her book, Beth keeps sending her letters between her visits. In particular, Beth uses her letters to share her own thoughts on events that she and Rachel experienced together. These letters show that even if Beth often makes snap judgments and acts irresponsibly in the moment, she does reflect on and learn from her behavior later on. For instance, after Rachel and Beth get into a nasty fight because Beth doesn’t want to lend Rachel a towel, Beth doesn’t apologize or express remorse for her behavior during the rest of Rachel’s visit—but then she sends Rachel a series of apology cards later that week. These cards support Rachel’s strong belief that Beth is capable of learning and growing, even if it generally takes her longer than others to do so. But without the cards, Rachel might never understand what Beth actually thinks about their relationship.

Letters and Cards Quotes in Riding the Bus with My Sister

The Riding the Bus with My Sister quotes below all refer to the symbol of Letters and Cards. For each quote, you can also see the other characters and themes related to it (each theme is indicated by its own dot and icon, like this one:

). Note: all page numbers and citation info for the quotes below refer to the Grand Central Publishing edition of Riding the Bus with My Sister published in 2013.
4. February: The Professor Quotes

Ah, yes. Cool. As my speech might sometimes seem unintelligible to Beth, so can hers seem to me, because Beth has her own lingo. And in Beth-speak, as I have gathered from her letters, “cool” does not concern hip attire or trendy indifference. Instead, it is the term of highest approval, bestowed only upon those people Beth deems worthy of her attention and trust, and crucial if one is to be promoted into her personal Top Ten (though, in truth, hip-hop shades or chiseled Brad Pitt features—neither of which the Professor possesses—are apt to increase the likelihood of admission). “Yes,” I say. “I guess I do mean he’s cool.”

I lean against my wall, moved and chastened. For fifteen minutes I watch the flurries turn to serious snow outside my window and listen to her, and think how hard this apology must be for her—and how hard all this is for me. I had always told myself that facing my feelings about my mother was the hardest thing I would ever have to do, but now, standing here after telling my sister that I hate her, and hating myself for hurting her so, I realize that being a good sister to Beth might be even more difficult. No one can be a good sister all the time. I can only try my best. Just because I am not a saint does not mean that I am a demon.

Unlock with LitCharts A+
Get the entire Riding the Bus with My Sister LitChart as a printable PDF.
"My students can't get enough of your charts and their results have gone through the roof." -Graham S.
Download 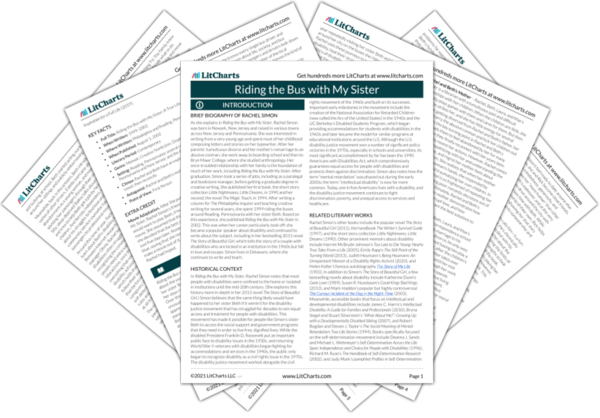 The timeline below shows where the symbol Letters and Cards appears in Riding the Bus with My Sister. The colored dots and icons indicate which themes are associated with that appearance.

During her workaholic phase, Rachel didn’t see Beth for several years. Instead, they wrote letters: every week, Rachel sent Beth a card, and Beth sent Rachel at least a dozen... (full context)

...the end of the day, Rachel drives home to Philadelphia, and Beth sends her two letters: one thanking her for visiting and one explaining that, on their drive, Tim saw Jesse... (full context)

...who just died, and was always mean to Beth. In fact, when Beth sent him a card in the hospital, he was delighted. Beth blushes when Jacob insists that she’s a good... (full context)

...years later, Rachel’s family moves back to New Jersey. She writes her father an anonymous letter asking him to return to the family. Otherwise, she spends most of her spare time... (full context)

...know that Beth has a crush on him and constantly writes about him in her letters. In the past, he kicked Beth off his bus when she kept explicitly describing her... (full context)

...introduces Rachel to several drivers and then starts collecting signatures for one of their birthday cards. Jacob tells Rachel that the drivers’ room is full of drama, ranging from casual gossip... (full context)

...Jesse jokes, “Now I got you stumped.” A few days later, Beth sends Rachel a letter with a list of things she loves about Jesse. (full context)

...decides to help Rachel find a husband. As she puts it in one of her letters, “I wAnt to HavE a driver as a BrothEr in law.” Rachel tells Beth no,... (full context)

...him but says that she’s too busy. A few weeks later, he writes her a letter with the same invitation, but she turns him down again and implies that she already... (full context)

...mom says that he’s moving in with the family. Rachel runs upstairs to write a letter on the typewriter her father gave her. (full context)

Beth keeps writing Rachel letters about Rick, the bus driver who asked her to dinner. One day, at last, they... (full context)

...her. While Rachel secretly writes to her friends about what happened, Max and Laura play cards and talk about moving on, and Beth watches TV, stares into space, and sleeps 12... (full context)

...Beth. Max reports that Beth has started riding buses, and Rachel and Beth start trading letters. Max visits Beth every month with his family, while Laura visits once a year, and... (full context)

...she’s “almost silly with happiness.” In particular, she’s excited for the holidays: she has written cards and bought gifts for her family and all the bus drivers. She gives Rachel her... (full context)

...room and wake up Rachel, like usual. Rachel finds Beth in her bedroom, writing thank-you cards, with her hair back to its old style. Rachel thanks Beth for the extra bit... (full context)

A few days after their fight, Beth starts sending Rachel apology letters and leaving her voicemail messages. At first, Rachel doesn’t respond. But after two days, she... (full context) 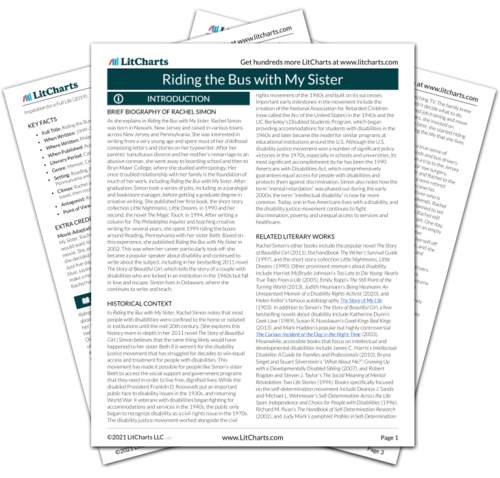 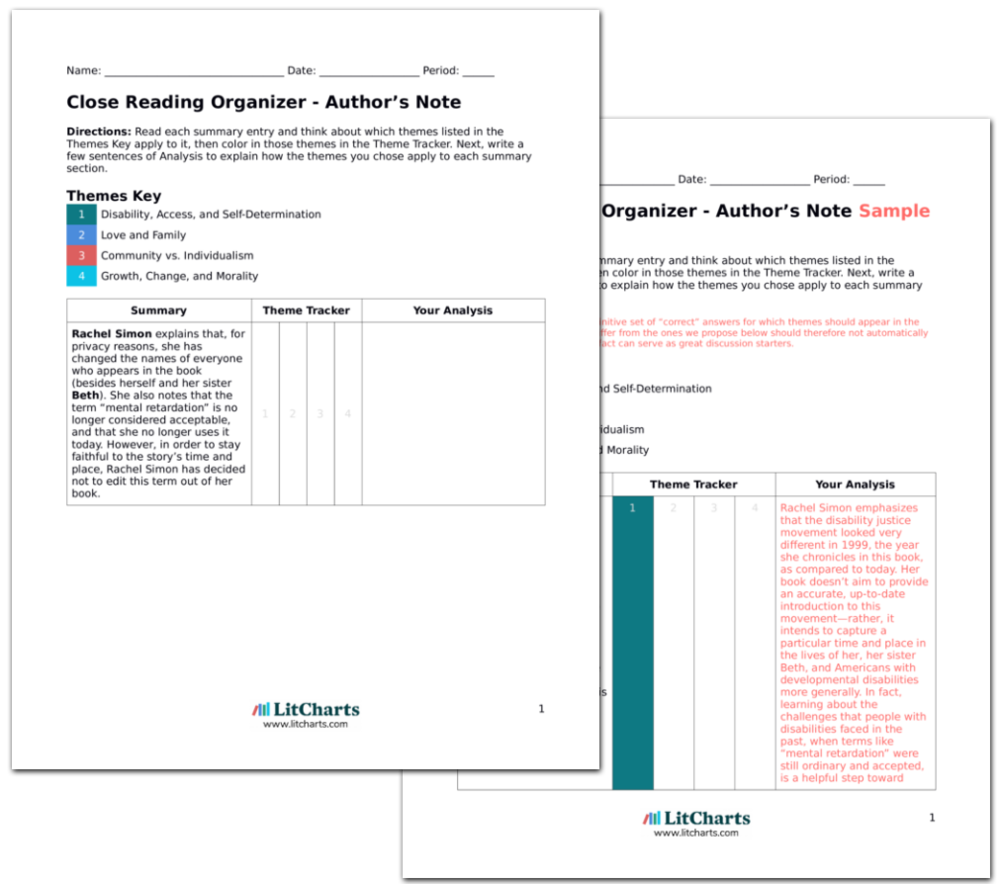