First featured in the uncanny coin toss between Rosencrantz and Guildenstern at play's start, coins appear throughout the play and symbolize the forces of mortality that control human life and render human free will meaningless. While a tossed coin should, according to the law of probability, have a 50-50 chance of falling 'heads' or 'tails,' the coins in this play fall almost exclusively on 'heads,' signaling that probability's law is suspended. Such suspension may seem at first to be the stuff of make-believe, but the play quickly reveals that there is nothing fantastical about such odds: they are in fact the odds of human will against death. Death always prevails, no matter how badly humans try to fight it or struggle to stay alive. Throughout the play, coins feature in various games (be it the coin toss of play's start, Guildenstern's coin toss with the Player, or Rosencrantz' coin tricks) that replace a 50-50 law of probability with an 100% likelihood, thereby symbolically gesturing towards death's utter inevitability.

The Coin Quotes in Rosencrantz and Guildenstern Are Dead

The Rosencrantz and Guildenstern Are Dead quotes below all refer to the symbol of The Coin. For each quote, you can also see the other characters and themes related to it (each theme is indicated by its own dot and icon, like this one:

). Note: all page numbers and citation info for the quotes below refer to the Grove Press edition of Rosencrantz and Guildenstern Are Dead published in 1967.
Act 1 Quotes

Everything has to be taken on trust; truth is only that which is taken to be true. It's the currency of living. There may be nothing behind it, but it doesn't make any difference so long as it is honoured. One acts on assumptions.

Life is a gamble, at terrible odds—if it was a bet you wouldn't take it.

Unlock with LitCharts A+
Get the entire Rosencrantz & Guildenstern LitChart as a printable PDF.
"My students can't get enough of your charts and their results have gone through the roof." -Graham S.
Download 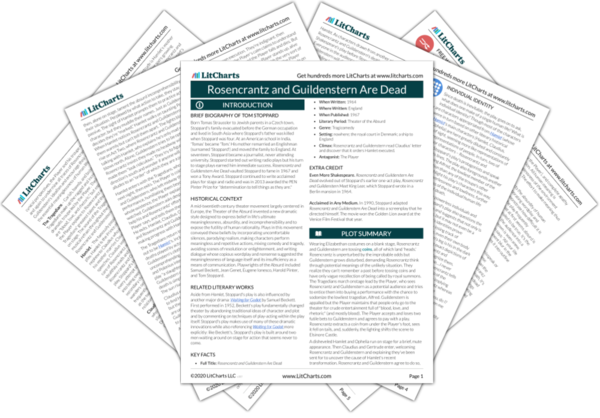 The Coin Symbol Timeline in Rosencrantz and Guildenstern Are Dead

The timeline below shows where the symbol The Coin appears in Rosencrantz and Guildenstern Are Dead. The colored dots and icons indicate which themes are associated with that appearance.

...entirely non-descript set where Rosencrantz and Guildenstern, in full Elizabethan costume, have been betting on coin after coin toss for a long time. The stage directions set the scene: every time... (full context)

Rosencrantz and Guildenstern continue to toss coins, which continue to fall on "heads" (it's now been 85 times and counting). They admit... (full context)

...entrance somewhere else." He spits on Rosencrantz's offer to buy a performance with a single coin. He accepts Guildenstern's offer to bet on coin tosses, which all fall on "heads." He... (full context)

...immobile for a long time until Rosencrantz prods him to lift his foot, revealing Guildenstern's coin beneath it. The Player exits. (full context)

Rosencrantz exclaims that the coin had fallen on tails and throws the coin at Guildenstern, who catches it. The lights... (full context)

...doesn't see any, and says the audience should burn to death. He takes out a coin to toss but claims not to have looked to see which face it fell on.... (full context)

Rosencrantz and Guildenstern reflect on Rosencrantz's coin trick, which Guildenstern was impressed by. They decide to "think of the future," "to have... (full context)