Download this LitChart! (PDF)
Teachers and parents! Struggling with distance learning? Our Teacher Edition on Running in the Family can help.

Welcome to the LitCharts study guide on Michael Ondaatje's Running in the Family. Created by the original team behind SparkNotes, LitCharts are the world's best literature guides.

Running in the Family: Introduction

A concise biography of Michael Ondaatje plus historical and literary context for Running in the Family.

Running in the Family: Plot Summary

A quick-reference summary: Running in the Family on a single page.

In-depth summary and analysis of every chapter of Running in the Family. Visual theme-tracking, too.

Running in the Family: Themes

Explanations, analysis, and visualizations of Running in the Family's themes.

Running in the Family: Quotes

Running in the Family's important quotes, sortable by theme, character, or chapter.

Running in the Family: Characters

Description, analysis, and timelines for Running in the Family's characters.

Description, analysis, and timelines for Running in the Family's terms.

Running in the Family: Symbols

Explanations of Running in the Family's symbols, and tracking of where they appear.

Running in the Family: Theme Wheel

An interactive data visualization of Running in the Family's plot and themes.

Michael Ondaatje was born in Colombo in 1943 to parents Mervyn and Doris, the youngest of four children. Ondaatje’s parents divorced when he was young, and he rarely saw his father as a child. Although he began his education in Ceylon, Ondaatje moved to England with his mother when he was 11. As a young adult he relocated to Canada, where he earned his undergraduate degree from the University of Toronto and then his M.A. from Queen’s University in Ontario. During Ondaatje’s collegiate studies, he met famed poet D.G. Jones, who appreciated Ondaatje’s potential as a poet and later became his mentor. Although Ondaatje also worked as a college professor, his poetry initiated his literary career in 1967 when he published his first volume, The Dainty Monsters, following with the critically-lauded The Collected Works of Billy the Kid in 1970. Ondaatje continued writing poetry, but in 1976 also published his first novel, Coming Through the Slaughter. In an effort to understand his own family history, Ondaatje made two long journeys to Ceylon in 1978 and 1980 to meet old friends and relatives and listen to their memories about his family’s lives, especially about his father. The stories he gathered on both trips became the subject of his 1982 fictionalized memoir, Running in the Family. Ondaatje won numerous Canadian literature awards for In the Skin of a Lion in 1987, but his greatest critical success came from his 1992 novel, The English Patient, which won the Booker Prize among many others, and whose film adaptation won the Academy Award for Best Picture. Today, Ondaatje continues to write poetry, fiction, and edit others’ work. His most recent novel, The Warlight, was published in 2018. He lives in Canada.
Get the entire Running in the Family LitChart as a printable PDF.
"My students can't get enough of your charts and their results have gone through the roof." -Graham S.
Download 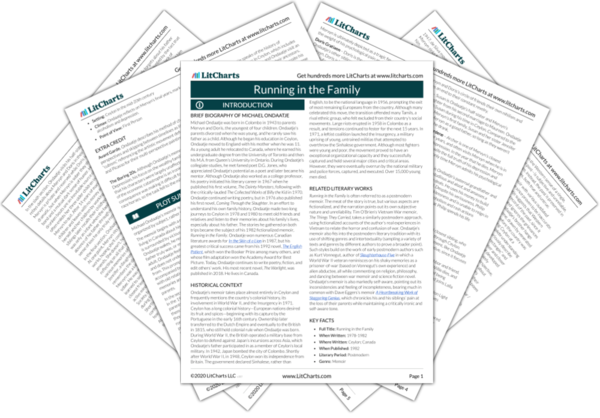 Historical Context of Running in the Family

Ondaatje’s memoir takes place almost entirely in Ceylon and frequently mentions the country’s colonial history, its involvement in World War II, and the Insurgency in 1971. Ceylon has a long colonial history—European nations desired its fruit and spices—beginning with its capture by the Portuguese in the early 16th century. Ownership later transferred to the Dutch Empire and eventually to the British in 1815, who still held colonial rule when Ondaatje was born. During World War II, the British operated a military base from Ceylon to defend against Japan’s incursions across Asia, which Ondaatje’s father participated in as a member of Ceylon’s local military. In 1942, Japan bombed the city of Colombo. Shortly after World War II, in 1948, Ceylon won its independence from Britain. The government declared Sinhalese, rather than English, to be the national language in 1956, prompting the exit of most remaining Europeans from the country. Although many celebrated this move, the transition offended many Tamils, a rival ethnic group, who felt excluded from their country’s social movements. Large riots erupted in 1958 in Colombo as a result, and tensions continued to fester for the next 15 years. In 1971, a leftist coalition launched the Insurgency, a military uprising of young, untrained militias that attempted to overthrow the Sinhalese government. Although most fighters were young and poor, the movement proved to have an exceptional organizational capacity and they successfully captured and held several major cities and critical areas. However, they were eventually overrun by the national military and police forces, captured, and executed. Over 15,000 young men died.

Other Books Related to Running in the Family

Running in the Family is often referred to as a postmodern memoir. The meat of the story is true, but various aspects are fictionalized, and the narration points out its own subjective nature and unreliability. Tim O’Brien’s Vietnam War memoir, The Things They Carried, takes a similarly postmodern approach, using fictionalized accounts of the author’s real experiences in Vietnam to relate the horror and confusion of war. Ondaatje’s memoir also fits into the postmodern literary tradition with its use of shifting genres and intertextuality (sampling a variety of texts and genres by different authors to prove a broader point). Such styles build on the work of early postmodern authors such as Kurt Vonnegut, author of Slaughterhouse-Five in which a World War II veteran reminisces on his shaky memories as a prisoner-of-war (based on Vonnegut’s own experience) and alien abductee, all while commenting on religion, philosophy, and dancing between war memoir and science fiction novel. Ondaatje’s memoir is also markedly self-aware, pointing out its inconsistencies and feeling of incompleteness, bearing much in common with Dave Eggers’s memoir A Heartbreaking Work of Staggering Genius, which chronicles his and his siblings’ pain at the loss of their parents while maintaining a critically ironic and self-aware tone.
Key Facts about Running in the Family

Extra Credit for Running in the Family

Avant Garde. Ondaatje describes his method of changing perspectives and skipping between timelines as literary “cubism,” referencing the artistic movement defined by Matisse and Picasso for their multi-perspective paintings.

The Boring 20s. Although Ondaatje’s memoir spans the Great Depression, his focus on the wealthy families of Ceylon means that his characters were largely unaffected. The only mention of the economic catastrophe is an ironic note that its worst consequence was making it difficult for individuals to board race horses, so the task fell to the military instead. 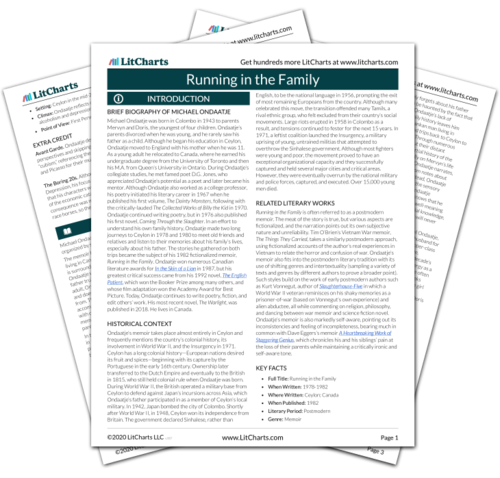 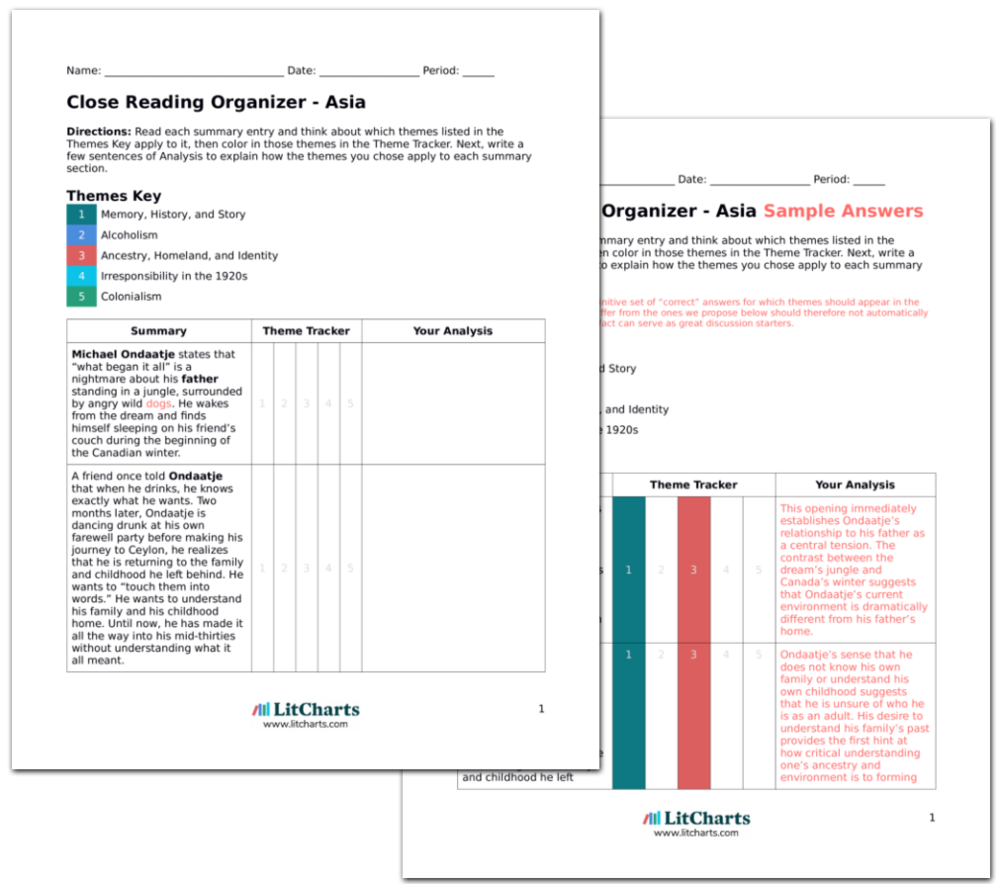