Eleven-year-old Sadako Sasaki lives with her mother, father, and siblings in Hiroshima, Japan. Sadako is a born runner who dreams of joining her junior high school’s racing team next year. She approaches everything in life with excitement and positivity, and is constantly on the lookout for “good luck signs” and other small auspicious details in the world around her. On Peace Day—an annual festival in remembrance of the victims of the atom bomb that was dropped on the city nine years before at the end of World War II—Sadako joins her family and her best friend Chizuko at the Peace Park to mourn the dead and celebrate the life that still goes on in Hiroshima. As Sadako moves through the festival, she eats and drinks and laughs with her friends, but also sees many people who bear horrible scars and disfigurations. At the end of the evening, Sadako and her family lower paper lanterns into the river to commemorate those they have lost, and Sadako heads home feeling that good luck is indeed all around her.

One fall day Sadako comes home with wonderful news—she has been picked to race on her class’s relay race team, which will up her chances at making the junior high racing team the following year. As she trains for the race her friends and family support and encourage her, and on the big day, Sadako runs hard and wins big. As soon as the race is over, though, Sadako is struck by a dizzy spell, and can hardly even enjoy her great success. After the race, as winter approaches, Sadako trains hard every day, even though the dizzy spells still come on after a long run.

In February of the new year, after several weeks of good health, Sadako faints at school while running during recess. Her father takes her to the Red Cross Hospital, and after the doctor, Dr. Numata, performs a series of tests, it is determined that Sadako has leukemia—an effect of lingering radiation in the air after the bombing nine years ago. Sadako is admitted to the hospital, and though a kind woman named Nurse Yasunaga assures her everything will be okay, Sadako is overcome by fear and sadness.

Sadako’s friend Chizuko comes to visit her in the hospital, and gives Sadako several pieces of colorful paper and a pair of scissors. She tells Sadako that, according to legend, if someone folds one thousand origami paper cranes, their wish will come true—if Sadako make the cranes, Chizuko says, she can be healthy once again. Chizuko folds a beautiful golden crane as an example, and soon Sadako starts making cranes of her own. That evening, when Sadako’s older brother Masahiro comes to visit, he offers to hang the many cranes she has already folded from the ceiling for her.

Sadako’s family, Chizuko, and even the doctors and nurses at the hospital begin saving paper for Sadako to use for her project. Masahiro hangs every single one, just as he promised he would, and over the next few months Sadako has good days and bad days as she receives treatment for her illness. Her flock grows to over three hundred. Sadako meets another patient—a boy named Kenji who also has leukemia. Though Kenji wasn’t born when the atom bomb was dropped, his mother suffered from radiation poisoning and passed it onto him. Both of Kenji’s parents are dead, and Kenji knows that he too will soon die. When Kenji at last passes, Sadako is very sad, but Nurse Yasunaga comforts her, explaining that Kenji is at last free from all his pain.

As the rainy season settles in, Sadako grows pale and listless and is unable to eat. Though her mother brings her some of her favorite foods in a special care package, Sadako’s swollen gums prevent her from enjoying them. Sadako’s mother hopes that when the sun comes back out, Sadako will be feeling better. Her family continues providing her with spare paper and even candy wrappers to make cranes out of, but as Sadako’s weakness increases she has trouble making even a couple of cranes at a time, and is stalled at just over five hundred paper cranes.

By the end of July, however, Sadako begins feeling better, and Dr. Numata agrees to let her go home for a visit. During her week at home Sadako makes another hundred cranes, but the constant visits from friends and family drain her and leave her weak, and when Sadako at last returns to the hospital she is actually relieved to be back in her quiet, private room. Sadako receives more shots and transfusions than ever in her first days back, and begins to really fear the prospect of her own death. As the fall leaves turn to gold, Sadako’s family comes to visit her. They bring her the gift of a beautiful hand-stitched traditional kimono robe, and though Sadako doesn’t understand why her family would spend time and money making something she’ll never get to wear, she accepts the gift graciously.

In the middle of October Sadako begins to lose track of the days. She can no longer fold even one paper crane, and she drifts in and out of consciousness. Her family comes to visit one last time, and she smiles warmly up at them—and her ceiling full of beautiful and free paper cranes—as she succumbs to her illness and passes away. 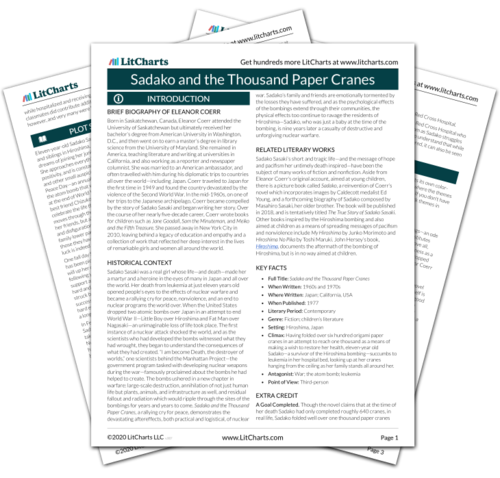 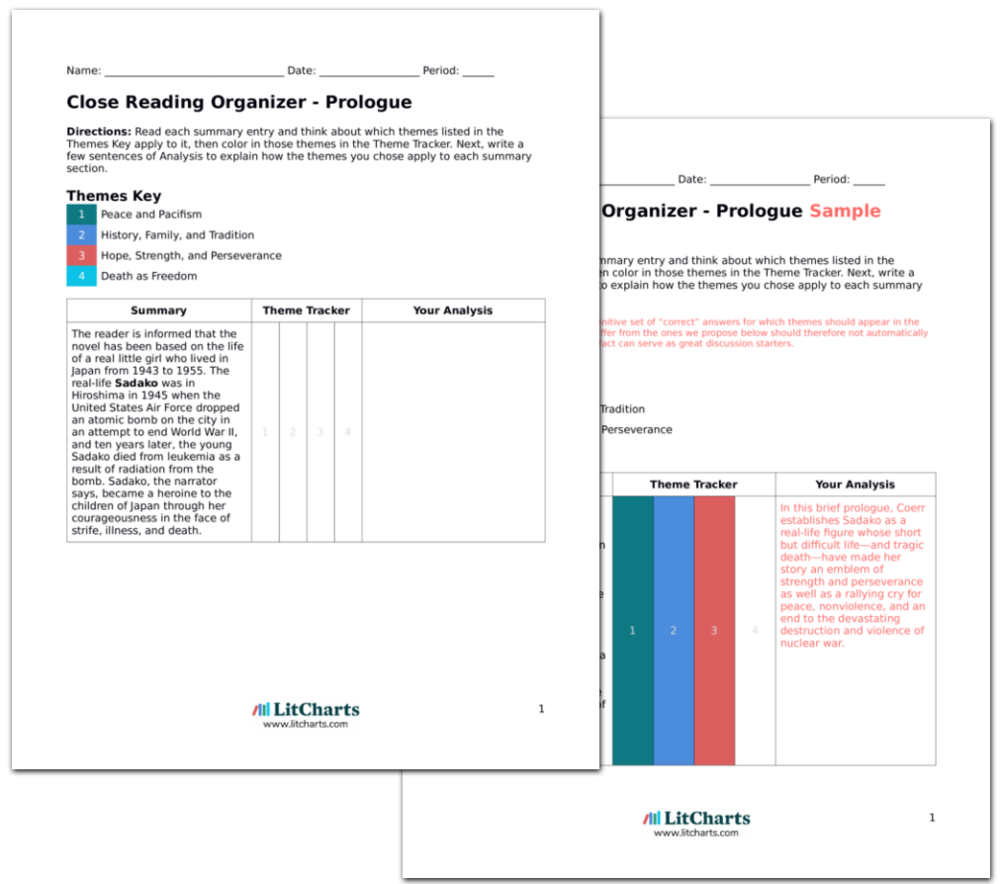