Download this LitChart! (PDF)
Teachers and parents! Struggling with distance learning? Our Teacher Edition on Saint Joan can help.

Welcome to the LitCharts study guide on George Bernard Shaw's Saint Joan. Created by the original team behind SparkNotes, LitCharts are the world's best literature guides.

A concise biography of George Bernard Shaw plus historical and literary context for Saint Joan.

A quick-reference summary: Saint Joan on a single page.

In-depth summary and analysis of every scene of Saint Joan. Visual theme-tracking, too.

Explanations of Saint Joan's symbols, and tracking of where they appear.

An interactive data visualization of Saint Joan's plot and themes.

George Bernard Shaw was born in 1856 in Dublin, the youngest child of George Carr Shaw, a civil servant, and Lucinda Elizabeth (Bessie) Shaw, a singer. Shaw unhappily attended four schools in his youth and developed a deep distaste for formal education. Bessie left for London in 1873 with his two older sisters, and Shaw followed them there in 1876. Shaw took odd jobs while in London, but it wasn’t until the 1880s that he began to make a livable income from writing. His first published works were novels, though he is best known for his dramas. Shaw became politically active during this time, attending meetings with the Social Democratic Federation. He joined the Fabian Society, a recently formed British socialist organization, in 1884. Shaw’s support of socialism often figures thematically into his writing. He shifted his focus from politics to playwriting in the 1890s and would establish a reputation as a major dramatist by the beginning of the 20th century. His first staged play, Widowers’ Houses, premiered at the Royalty Theatre in 1892. Widowers’ Houses is one of three of Shaw’s plays known as the as Plays Unpleasant. The Plays Unpleasant were “unpleasant” because they sacrificed entertainment value in order to force the audience to witness and reflect on relevant social and economic issues and inequalities. Shaw was a prolific playwright, having published over 60 plays, many of which contain the elements of sharp social criticism demonstrated in The Plays Unpleasant. Among his more famous plays are Major Barbara (1905), Pygmalion (1912) and Saint Joan (1923). In 1925—shortly after the publication of Saint Joan—Shaw received the Nobel Prize for Literature. He died in 1950 at the age of 94.
Get the entire Saint Joan LitChart as a printable PDF.
"My students can't get enough of your charts and their results have gone through the roof." -Graham S.
Download 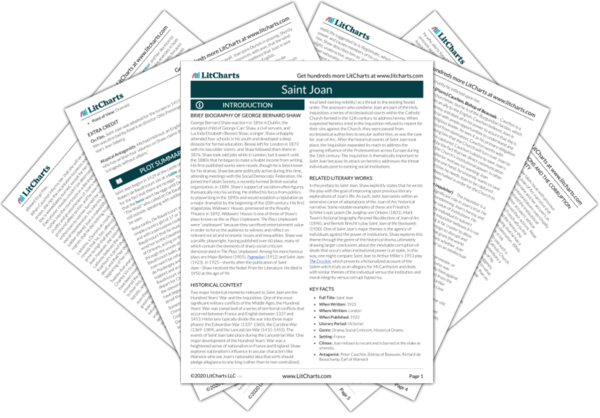 Two major historical moments relevant to Saint Joan are the Hundred Years’ War and the Inquisition. One of the most significant military conflicts of the Middle Ages, the Hundred Years’ War was comprised of a series of territorial conflicts that occurred between France and English between 1337 and 1453. Historians typically divide the war into three major phases: the Edwardian War (1337-1360), the Caroline War (1369-1389), and the Lancastrian War (1415-1453). The events of Saint Joan take place during the Lancastrian War. One major development of the Hundred Years’ War was a heightened sense of nationalism in France and England. Shaw explores nationalism’s influence in secular characters like Warwick who see Joan’s nationalist idea that serfs should pledge allegiance to one king (rather than to non-centralized, local land-owning nobility) as a threat to the existing feudal order. The assessors who condemn Joan are part of the Holy Inquisition, a series of ecclesiastical courts within the Catholic Church formed in the 12th century to address heresy. When suspected heretics tried in the Inquisition refused to repent for their sins against the Church, they were passed from ecclesiastical authorities to secular authorities, as was the case for Joan of Arc. After the historical events of Saint Joan took place, the Inquisition expanded its reach to address the growing influence of the Protestantism across Europe during the 16th century. The Inquisition is thematically important to Saint Joan because its attack on heretics addresses the threat individuals pose to existing social institutions.

Other Books Related to Saint Joan

In the preface to Saint Joan, Shaw explicitly states that he wrote the play with the goal of improving upon previous literary explorations of Joan’s life. As such, Saint Joan exists within an extensive canon of adaptations of the Joan of Arc historical narrative. Some notable examples of these are Friedrich Schiller’s epic poem Die Jungfrau von Orleans (1801), Mark Twain’s fictional biography Personal Recollections of Joan of Arc (1896), and Bertolt Brecht’s play Saint Joan of the Stockyards (1930). One of Saint Joan’s major themes is the agency of individuals against the power of institutions. Shaw explores this theme through the genre of the historical drama, ultimately drawing larger conclusions about the inevitable corruption of ideals that occurs when institutional power is at stake. In this way, one might compare Saint Joan to Arthur Miller’s 1953 play The Crucible, which presents a fictionalized account of the Salem witch trials as an allegory for McCarthyism and deals with similar themes of the individual versus the institution and moral integrity versus corrupt hypocrisy.
Key Facts about Saint Joan

On Film. Saint Joan was adapted for the screen in 1957. The film was directed by American director Otto Preminger and stars Jean Seberg.

Atypical Antagonists. Michael Holroyd, an English biographer who has written four volumes on Shaw, claims that Saint Joan is “a tragedy without villains.” 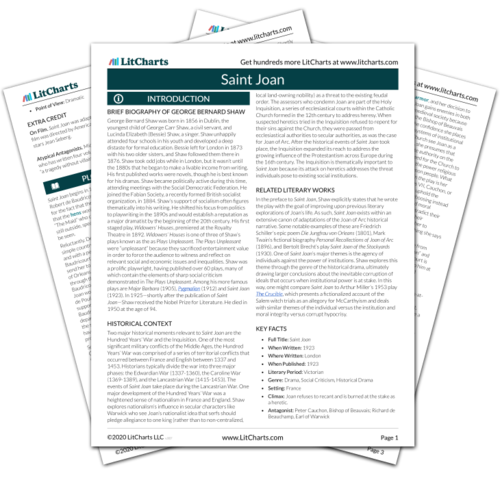 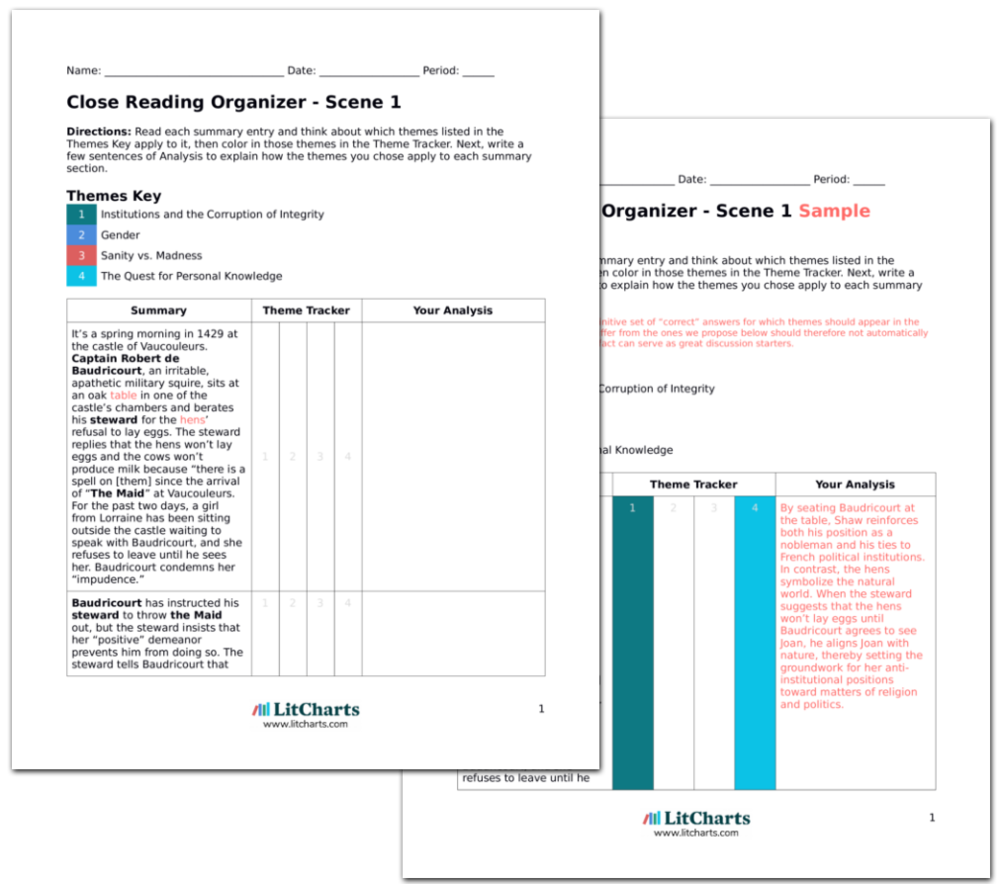