Download this LitChart! (PDF)
Teachers and parents! Struggling with distance learning? Our Teacher Edition on Salvage the Bones can help.

Get LitCharts A+
Manny’s cousin, a local boy and dogfighter whose dog Kilo sired China’s puppies. Because of this, Rico feels entitled to taking at least one puppy from the litter for free. When Skeetah doesn’t want to give him one, the two get into a physical fight; Marquise suggests they settle the matter using their dogs rather than their fists, and both Rico and Skeetah agree. Rico is hotheaded, ferocious, and will do anything for a win, just like his dog Kilo.

Rico Quotes in Salvage the Bones

The Salvage the Bones quotes below are all either spoken by Rico or refer to Rico. For each quote, you can also see the other characters and themes related to it (each theme is indicated by its own dot and icon, like this one:

Skeetah is squeezing China’s neck, murmuring in her ear. This time I cannot hear what he says. Skeetah is whispering so closely to China's ear I only catch half of his lips behind the red-veined white of her ear. Her breast drips blood. China licks Skeetah's cheek.

"Maybe I don't want the white [puppy]," Rico says. "Maybe I want the colored one that got more Kilo in it." He laughs.

Skeetah stands, and China, stout and white, looks up at him. "She fights," Skeetah says.

Randall pulls the stick from his shoulders, swings it around

to his front. "She's already fucked up enough," Randall says.

"Cuz, if she lost, she lost," Big Henry says, slowly, as if he is tasting the words.

Get the entire Salvage the Bones LitChart as a printable PDF.
"My students can't get enough of your charts and their results have gone through the roof." -Graham S.
Download 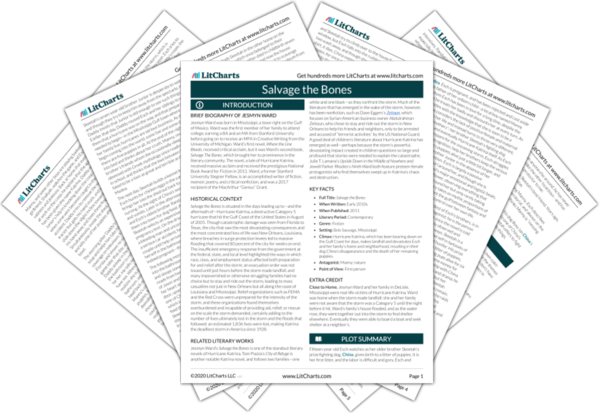 The timeline below shows where the character Rico appears in Salvage the Bones. The colored dots and icons indicate which themes are associated with that appearance.

...the fact that the dog that sired them, Kilo, is equally fierce. The dog’s owner, Rico, is Manny’s cousin, and he makes his whole living dogfighting. The fifth puppy comes; it... (full context)

Randall and Manny arrive, and Randall tells everyone that Manny’s cousin Rico lost his last dog to parvo. Manny tells Skeetah he should kill the puppy quickly—every... (full context)

...tells Esch to keep watch while he breaks into the barn to steal cow wormer; Rico told him once that it was okay to give dogs cow wormer in order to... (full context)

Manny tells Skeetah that his cousin Rico is bringing his dog, Kilo, to participate in the next fight; Kilo is the dog... (full context)

...she watches Randall on the court, and doesn’t even notice when she bumps smack into Rico—Manny’s cousin. Manny and Shaliyah are with him, and though Rico tries to talk to Esch,... (full context)

...back to the bleachers arm-in-arm, and Esch is upset to realize that Manny, Shaliyah, and Rico are sitting just a few seats below them. Skeetah, noticing Esch’s demeanor and intuiting what... (full context)

Skeetah deflects Rico’s questions, replying that because it was China’s first litter most of the puppies were born... (full context)

Rico, enraged at Skeetah’s attitude, threatens to “fuck [him] up.” Manny tries to calm Rico down,... (full context)

...as the fight migrates outside. Randall follows the group, demanding to know what has happened. Rico snarlingly tells Skeetah he’ll see him and his dog tomorrow, and Skeetah vows that Rico... (full context)

...and the way Skeetah interrupted it by fighting. Skeetah defends his choice to fight with Rico, and insists that Randall doesn’t have to come to the fight; it has nothing to... (full context)

...fights. Across the clearing, Esch and her brothers make out Kilo, straining against the leash Rico holds as he digs excitedly in the dirt. Jerome looks at Kilo, and assures the... (full context)

...last, it is time for Boss and Kilo to fight—the fight that will determine whether Rico gets to take the puppy of his choice from Skeetah for free. Rico and Jerome... (full context)

Rico insists that Kilo won the fight, but no one else supports his claim. Everybody can... (full context)

...weak and easy move, Esch thinks. China retaliates, and her bite is so bad that Rico calls a time-out. As soon as Skeetah calls China’s name, she turns around and smiles... (full context)

Rico and Skeetah tend to their dogs. Esch watches across the clearing as Manny whispers to... (full context) 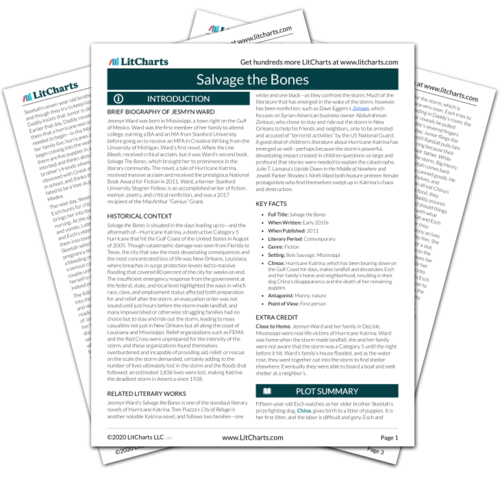 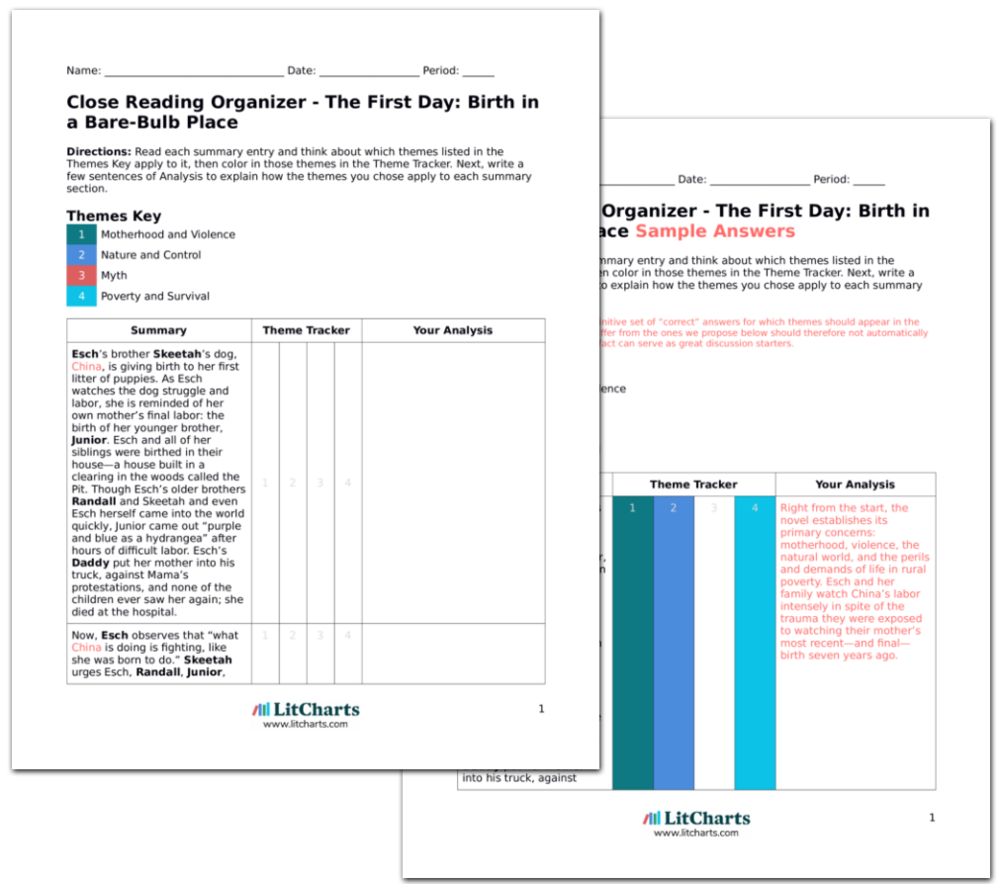