Download this LitChart! (PDF)
Teachers and parents! Struggling with distance learning? Our Teacher Edition on Sapiens can help.

Welcome to the LitCharts study guide on Yuval Noah Harari's Sapiens. Created by the original team behind SparkNotes, LitCharts are the world's best literature guides.

A concise biography of Yuval Noah Harari plus historical and literary context for Sapiens.

A quick-reference summary: Sapiens on a single page.

In-depth summary and analysis of every chapter of Sapiens. Visual theme-tracking, too.

Explanations of Sapiens's symbols, and tracking of where they appear.

An interactive data visualization of Sapiens's plot and themes.

Harari is of Eastern European and Lebanese ethnicity, and he was born in Israel. His father was an engineer, and his mother was a clerical worker. As a young man, Harari gained an exemption from mandatory military service in Israel due to his poor health. He studied history and international relations, specializing in medieval history and military history, at the Hebrew University of Israel from 1993 to 1998, before completing a PhD in 2005. Harari met his husband Itzik Yahav in 2002, and they married each other in a civil ceremony in Toronto, Canada. They currently live in a Jewish agricultural settlement named Mesilat Zion, which was built over the Palestinian village of Bayt Mahsir in 1950. Harari has published seven books in total. Sapiens was originally published in Hebrew in 2011 (and then in English in 2014). Harari based the book on a series of lectures that he delivered at the Hebrew University of Israel. Although Sapiens was criticized in scholarly circles for Harari’s tendency to favor sensationalist rhetoric over factual accuracy, it went on to become an international bestseller.
Get the entire Sapiens LitChart as a printable PDF.
"My students can't get enough of your charts and their results have gone through the roof." -Graham S.
Download 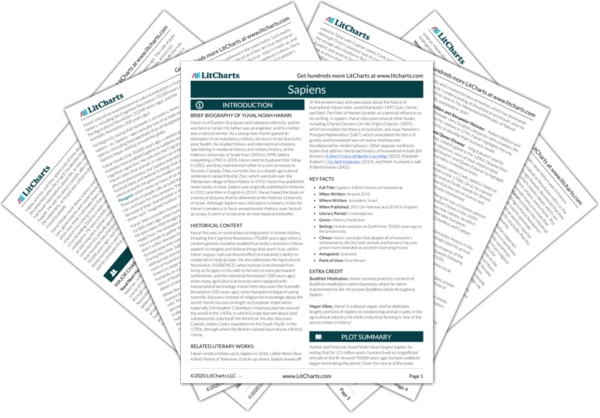 Harari focuses on several key turning points in human history, including the Cognitive Revolution (70,000 years ago) when a random genetic mutation enabled humanity’s ancestors (Homo sapiens) to imagine and believe things that aren’t true, which, Harari argues, had a profound effect on humanity’s ability to cooperate in large groups. He also addresses the Agricultural Revolution (10,000 BCE) when humans transitioned from living as foragers in the wild to farmers in more permanent settlements, and the Industrial Revolution (300 years ago), when many agricultural processes were replaced with industrialized technology. Harari then discusses the Scientific Revolution (500 years ago), when humankind began trusting scientific discovery instead of religion for knowledge about the world. Harari focuses at length on European imperialism, especially Christopher Columbus’s infamous journey around the world in the 1400s, in which Europe learned about (and subsequently colonized) the Americas. He also discusses Captain James Cook’s expedition to the South Pacific in the 1700s, through which the British claimed Australia as a British colony.

Other Books Related to Sapiens

Harari wrote a follow-up to Sapiens in 2016, called Homo Deus: A Brief History of Tomorrow. It picks up where Sapiens leaves off (in the present day) and speculates about the future of humankind. Harari cites Jared Diamond’s 1997 Guns, Germs, and Steel: The Fates of Human Societies as a seminal influence on his writing. In Sapiens, Harari discusses several other books, including Charles Darwin’s On the Origin of Species (1859), which formulates the theory of evolution, and Isaac Newton’s Principia Mathematica (1687), which postulated the force of gravity and formulated laws of motion that became foundational for modern physics. Other popular nonfiction books that address the broad history of humankind include Bill Bryson’s A Short History of Nearly Everything (2003), Elizabeth Kolbert’s The Sixth Extinction (2014), and Mark Kurlanski’s Salt: A World History (2002).
Key Facts about Sapiens

Vegan Vibes. Harari is a devout vegan, and he dedicates lengthy portions of Sapiens to condemning animal cruelty in the agricultural industry. He thinks industrial farming is “one of the worst crimes in history.” 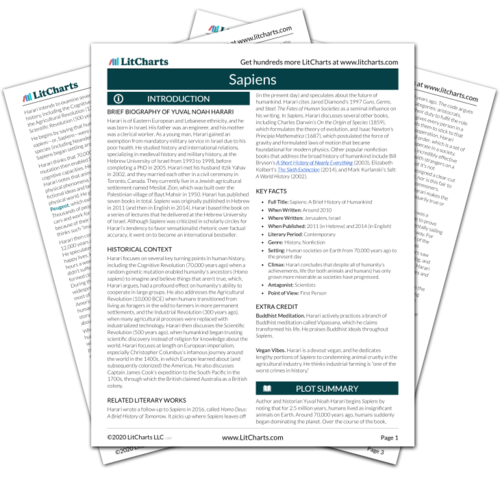 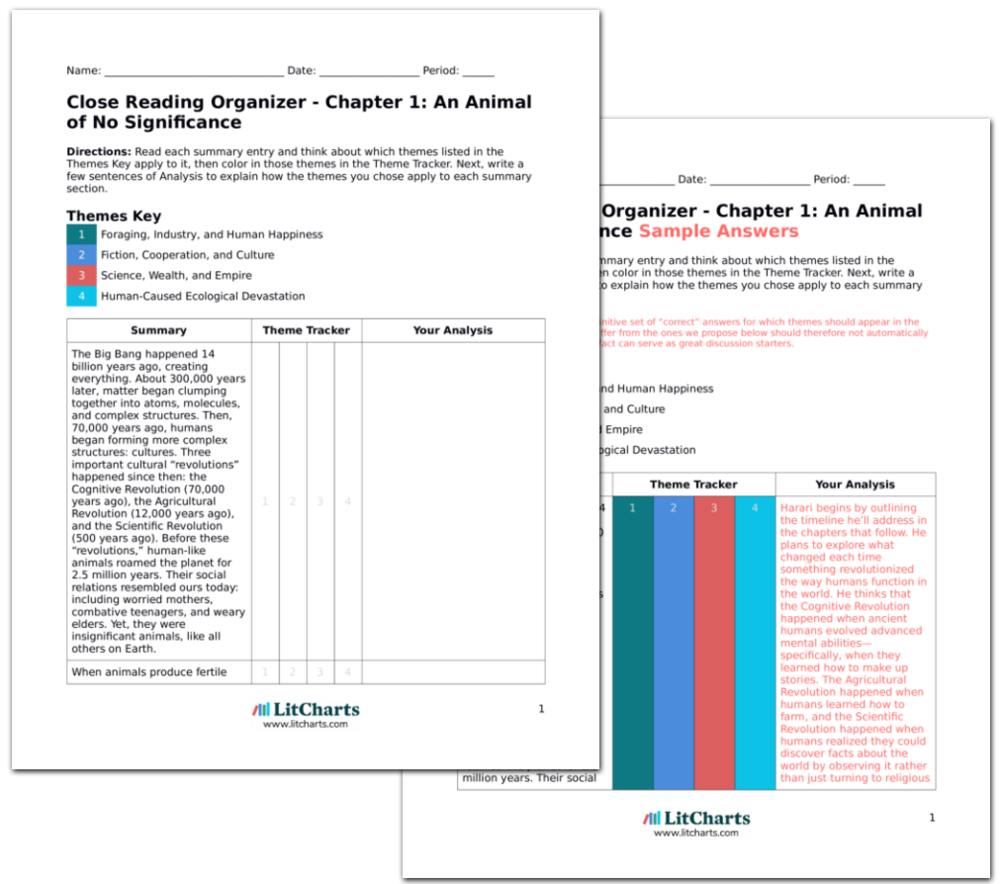