Second Treatise of Government
Introduction + Context
Plot Summary
Detailed Summary & Analysis
Preface Chapter 1: Of Civil-Government Chapter 2: Of the State of Nature Chapter 3: Of the State of War Chapter 4: Of Slavery Chapter 5: Of Property Chapter 6: Of Paternal Power Chapter 7: Of Political of Civil Society Chapter 8: Of the Beginning of Political Societies Chapter 9: Of the End of Political Society and Government Chapter 10: Of the Forms of a Common-wealth Chapter 11: Of the Extent of Legislative Power Chapter 12: Of the Legislative, Executive, and Federative Power of the Common-wealth Chapter 13: Of the Subordination of the Powers of the Common-wealth Chapter 14: Of Prerogative Chapter 15: Of Paternal, Political, and Despotical Power, considered together Chapter 16: Of Conquest Chapter 17: Of Usurpation Chapter 18: Of Tyranny Chapter 19: Of the Dissolution of Government
Themes
All Themes Nature, War, and Civil Society Consent of the Governed and the Role of Government Power and Absolute Monarchies The Dissolution of Government
Quotes
Characters
All Characters John Locke Sir Robert Filmer Sir Richard Hooker Thomas Hobbes King James I King William III
Terms
All Terms Common-wealth Prerogative State of Nature State of War
Symbols
All Symbols Nature

Download this LitChart! (PDF)
Teachers and parents! Struggling with distance learning? Our Teacher Edition on Second Treatise of Government can help.

Welcome to the LitCharts study guide on John Locke's Second Treatise of Government. Created by the original team behind SparkNotes, LitCharts are the world's best literature guides.

A concise biography of John Locke plus historical and literary context for Second Treatise of Government.

A quick-reference summary: Second Treatise of Government on a single page.

In-depth summary and analysis of every chapter of Second Treatise of Government. Visual theme-tracking, too.

Explanations, analysis, and visualizations of Second Treatise of Government's themes.

Description, analysis, and timelines for Second Treatise of Government's characters.

Description, analysis, and timelines for Second Treatise of Government's terms.

Explanations of Second Treatise of Government's symbols, and tracking of where they appear.

An interactive data visualization of Second Treatise of Government's plot and themes.

Locke was born to Agnes and John Locke, an attorney, in Wrington, Somerset, England. In 1647, Locke enrolled at Westminster School, one of the oldest public schools in London, and in 1652, he enrolled at Christ Church, Oxford, a college of the University of Oxford in England. Locke earned a bachelor’s degree in 1656 and a master’s degree in 1658. He developed an interest in medicine while at Oxford, and after studying independently for some time, he returned to Oxford and graduated with a Bachelor of Medicine in 1675. In 1666, Locke met Anthony Ashley Cooper, a prominent English politician, when Ashley went to Oxford to seek treatment for a liver infection. Ashley was impressed with Locke and hired him as his personal physician. In 1683, likely due to his association with Ashley, Locke was implicated in the Rye House Plot, a plot to assassinate King Charles II of England. Charles II was a Roman Catholic and Ashley was an outspoken opponent of Roman Catholics serving as king. It is unclear whether or not Locke was actually involved in the plot, but he fled to the Netherlands anyway, where he stayed until Charles II was overthrown in the Glorious Revolution and replaced by James II, a Protestant, putting an official end to Roman Catholics ruling as kings. Locke wrote prolifically during his exile, and upon his return to London in 1688, he published several works, including An Essay Concerning Human Understanding and A Letter Concerning Toleration. Locke wrote Two Treatise of Government in 1689 at Ashley’s insistence. Locke never married or had children, and in 1691, he moved in with his friend Lady Masham, a fellow writer and philosopher. In the following years, Locke grew sick with worsening asthma and died at Lady Masham’s home in 1704 at the age of 72. Locke’s contribution to the literary canon and Western thought is immense. He is often considered the Father of Liberalism, and his philosophical works are some of the most influential.
Get the entire Second Treatise of Government LitChart as a printable PDF.
"My students can't get enough of your charts and their results have gone through the roof." -Graham S.
Download 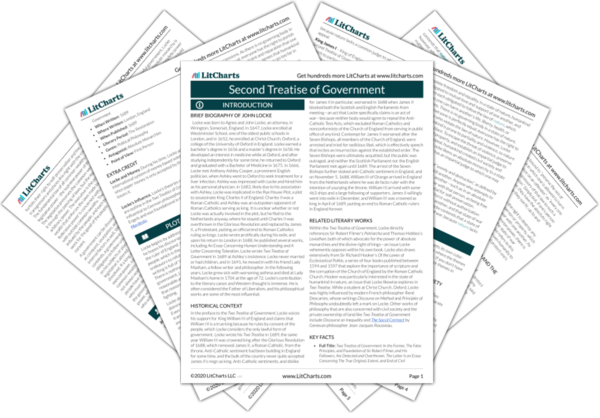 In the preface to the Two Treatise of Government, Locke voices his support for King William III of England and claims that William III is a true king because he rules by consent of the people, which Locke considers the only lawful form of government. Locke wrote his Two Treatise in 1689, the same year William III was crowned king after the Glorious Revolution of 1688, which removed James II, a Roman Catholic, from the throne. Anti-Catholic sentiment had been building in England for some time, and the bulk of the country never quite accepted James II’s reign as king. Anti-Catholic sentiments, and dislike for James II in particular, worsened in 1688 when James II blocked both the Scottish and English Parliaments from meeting—an act that Locke specifically claims is an act of war—because neither body would agree to repeal the Anti-Catholic Test Acts, which excluded Roman Catholics and nonconformists of the Church of England from serving in public office of any kind. Contempt for James II worsened after the Seven Bishops, all members of the Church of England, were arrested and tried for seditious libel, which is effectively speech that incites an insurrection against the established order. The Seven Bishops were ultimately acquitted, but the public was outraged, and neither the Scottish Parliament nor the English Parliament met again until 1689. The arrest of the Seven Bishops further stoked anti-Catholic sentiment in England, and on November 5, 1688, William III of Orange arrived in England from the Netherlands where he was de facto ruler with the intention of usurping the throne. William III arrived with some 463 ships and a large following of supporters. James II willingly went into exile in December, and William III was crowned as king in April of 1689, putting an end to Roman Catholic rulers in England forever.

Other Books Related to Second Treatise of Government

Within the Two Treatise of Government, Locke directly references Sir Robert Filmer’s Patriarcha and Thomas Hobbes’s Leviathan, both of which advocate for the power of absolute monarchies and the divine right of kings—an issue Locke vehemently opposes within his own book. Locke also draws extensively from Sir Richard Hooker’s Of the Lawes of Ecclesiastical Politie, a series of four books published between 1594 and 1597 that explore the importance of scripture and the corruption of the Church of England by the Roman Catholic Church. Hooker was particularly interested in the state of humankind in nature, an issue that Locke likewise explores in Two Treatise. While a student at Christ Church, Oxford, Locke was highly influenced by modern French philosopher René Descartes, whose writings Discourse on Method and Principles of Philosophy undoubtedly left a mark on Locke. Other works of philosophy that are also concerned with civil society and the private ownership of land like Two Treatise of Government include Discourse on Inequality and The Social Contract by Genevan philosopher Jean-Jacques Rousseau.
Key Facts about Second Treatise of Government

Locke and Money. During his time, Locke advocated for an international system of money based solely on gold and silver, since paper money is only accepted by the government who issues it.

Locke’s Influence. Locke’s theories of labor and property that are outline in the Two Treaties of Government was highly influential to German philosophers Karl Marx and Friedrich Engels and was foundational in their own book, The Communist Manifesto. 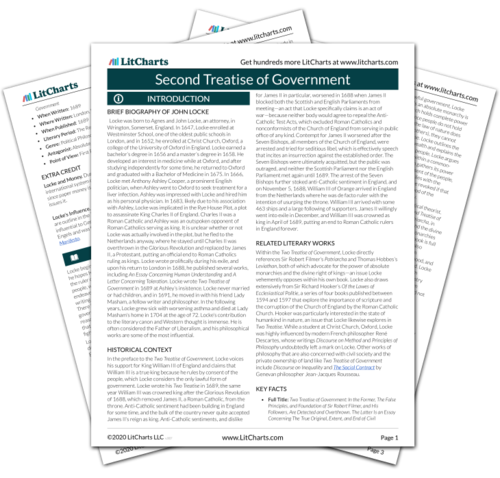 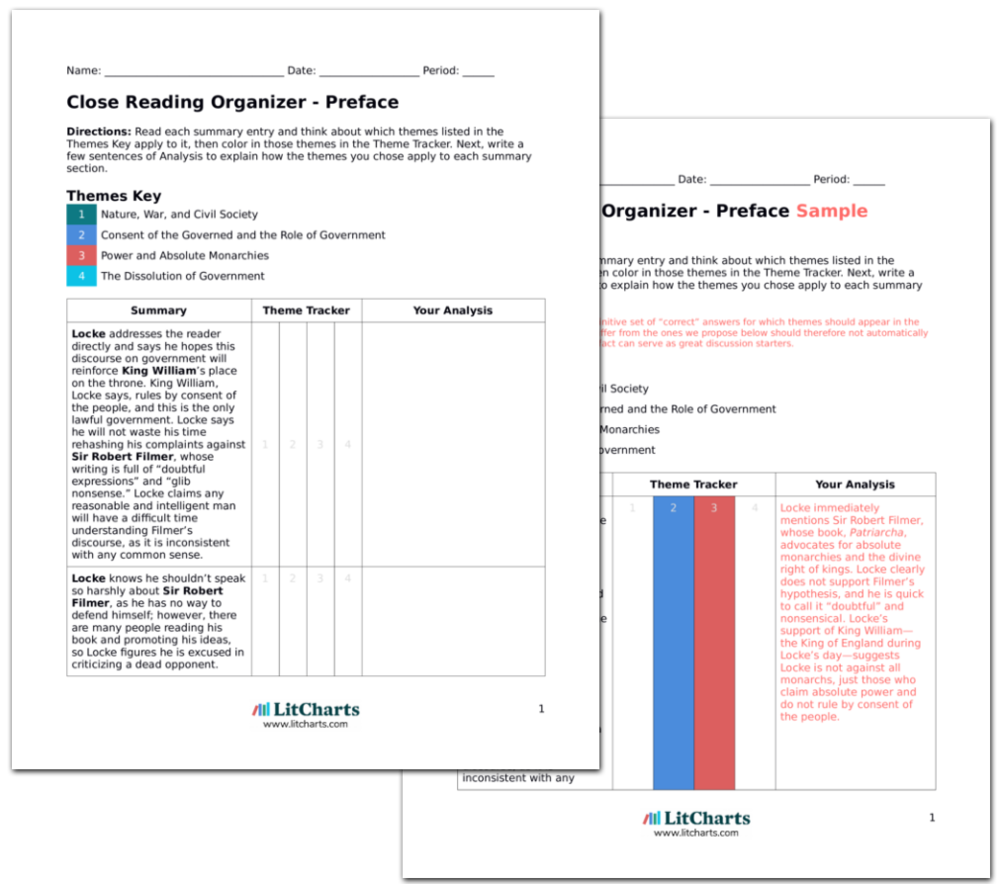