Welcome to the LitCharts study guide on Cate Kennedy's Seventy-Two Derwents. Created by the original team behind SparkNotes, LitCharts are the world's best literature guides.

A concise biography of Cate Kennedy plus historical and literary context for Seventy-Two Derwents.

A quick-reference summary: Seventy-Two Derwents on a single page.

In-depth summary and analysis of every of Seventy-Two Derwents. Visual theme-tracking, too.

Explanations of Seventy-Two Derwents's symbols, and tracking of where they appear.

An interactive data visualization of Seventy-Two Derwents's plot and themes.

After studying at the University of Canberra, Cate Kennedy spent time working in community development in Australia. She went on to spend two years volunteering with community programs in Mexico, an experience which helped inspire her early work, including the poetry collection Signs of Other Fires and the memoir Sing, and Don’t Cry: A Mexican Journal. She later returned to Australia, where she has taught creative writing at the University of Melbourne and elsewhere. She has published several collections of poetry and short stories, such as The Taste of River Water (2011), Dark Water (2012), and Like a House on Fire (2012), as well as a novel, The World Beneath (2010). She currently lives in Victoria, Australia.
Get the entire Seventy-Two Derwents LitChart as a printable PDF.
"My students can't get enough of your charts and their results have gone through the roof." -Graham S.
Download 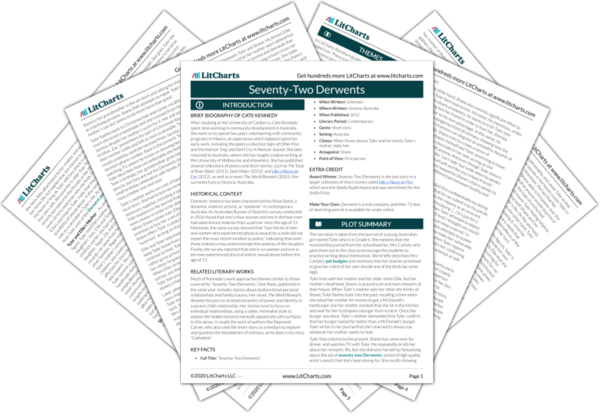 Domestic violence has been characterized by Rosie Batty, a domestic violence activist, as “epidemic” in contemporary Australia. An Australian Burean of Statistics survey conducted in 2016 found that one in four women and one in thirteen men had experienced violence from a partner since the age of 15. Moreover, the same survey showed that “two-thirds of men and women who experienced physical assault by a male did not report the most recent incident to police,” indicating that even these statistics may underestimate the severity of the situation. Finally, the survey reported that one in six women and one in ten men experienced physical and/or sexual abuse before the age of 15.

Other Books Related to Seventy-Two Derwents

Much of Kennedy’s work approaches themes similar to those covered by “Seventy-Two Derwents.” Dark Roots, published in the same year, includes stories about dysfunctional personal relationships and family trauma. Her novel, The World Beneath, likewise focuses on strained dynamics of power and identity in a parent-child relationship. Her stories tend to focus on individual relationships, using a sober, minimalist style to expose the hidden tensions beneath apparently calm surfaces. In this sense, it recalls the work of authors like Raymond Carver, who also used the short-story as a medium to explore and question the foundations of intimacy, as he does in his story “Cathedral.”
Key Facts about Seventy-Two Derwents

Award Winner. Seventy-Two Derwents is the last story in a larger collection of short stories called Like a House on Fire, which won the Steele Rudd Award and was shortlisted for the Stella Prize.

Make Your Own. Derwent is a real company, and their 72-box of sketching pencils is available for order online.