Download this LitChart! (PDF)
Teachers and parents! Struggling with distance learning? Our Teacher Edition on Shakuntala can help.

Welcome to the LitCharts study guide on Kalidasa's Shakuntala. Created by the original team behind SparkNotes, LitCharts are the world's best literature guides.

A concise biography of Kalidasa plus historical and literary context for Shakuntala.

A quick-reference summary: Shakuntala on a single page.

In-depth summary and analysis of every act of Shakuntala. Visual theme-tracking, too.

Explanations of Shakuntala's symbols, and tracking of where they appear.

An interactive data visualization of Shakuntala's plot and themes.

Little is known about Kalidasa, who is widely considered to be the greatest poet and dramatist who wrote in the Classical Sanskrit language (the language of religion and high culture in ancient and medieval India). It’s possible that he wrote under the patronage of the Gupta dynasty, which ruled most of the Indian subcontinent during his lifetime. He was probably a member of the brahmin (priestly) class, and the benedictions in the prologues of his plays suggest that he was a particular devotee of the gods Shiva and his consort Kali (“Kalidasa” means “servant of Kali”). The Recognition of Shakuntala is considered to be his masterpiece and it is widely translated, but he also wrote two other plays, Malavika and Agnimitra and Urvasi Won by Valor, as well as epic poems and other poetry. Kalidasa’s writings draw heavily from ancient Hindu texts, including the Ramayana and the Mahabharata—two vast Sanskrit epics filled with mythology and Hindu teachings.
Get the entire Shakuntala LitChart as a printable PDF.
"My students can't get enough of your charts and their results have gone through the roof." -Graham S.
Download 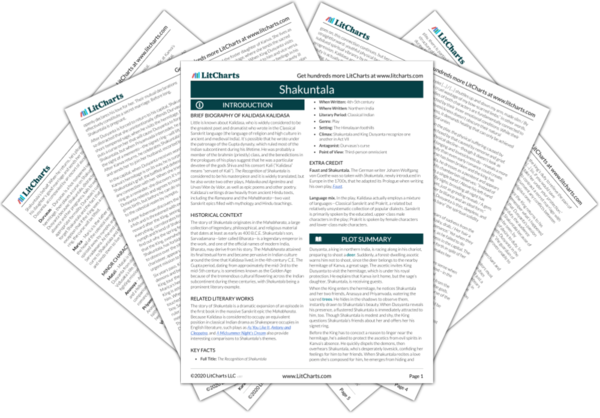 The story of Shakuntala originates in the Mahabharata, a large collection of legendary, philosophical, and religious material that dates at least as early as 400 B.C.E. Shakuntala’s son, Sarvadamana—later called Bharata—is a legendary emperor in the work, and one of the official names of modern India, Bharata, may derive from his story. The Mahabharata attained its final textual form and became pervasive in Indian culture around the time that Kalidasa lived, in the 4th century C.E. The Gupta period, dating from approximately the mid-3rd to the mid-5th century, is sometimes known as the Golden Age because of the tremendous cultural flowering across the Indian subcontinent during these centuries, with Shakuntala being a prominent literary example.

Other Books Related to Shakuntala

The story of Shakuntala is a dramatic expansion of an episode in the first book in the massive Sanskrit epic the Mahabharata. Because Kalidasa is considered to occupy an equivalent position in classical Indian drama as Shakespeare occupies in English literature, such plays as As You Like It, Antony and Cleopatra, and A Midsummer Night's Dream also provide interesting comparisons to Shakuntala’s themes.
Key Facts about Shakuntala

Faust and Shakuntala. The German writer Johann Wolfgang von Goethe was so taken with Shakuntala, newly introduced in Europe in the 1700s, that he adapted its Prologue when writing his own play, Faust. 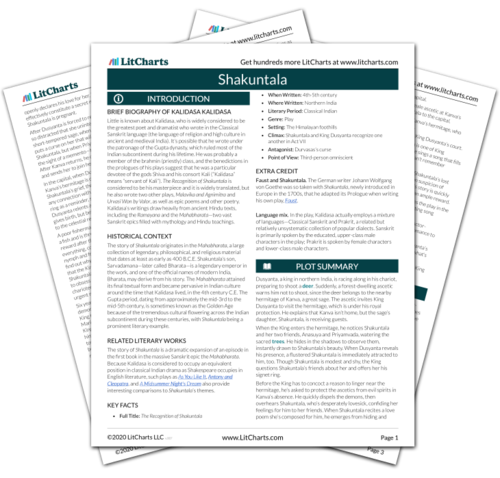 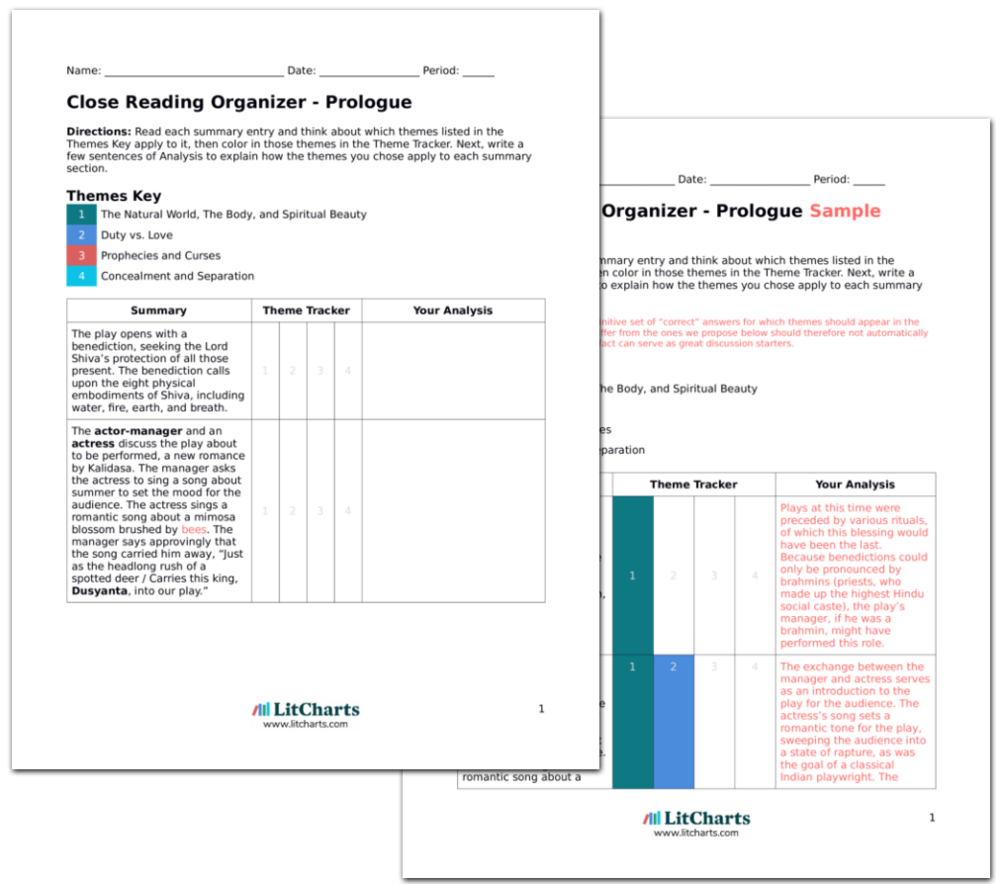