Download this LitChart! (PDF)
Teachers and parents! Struggling with distance learning? Our Teacher Edition on She Stoops to Conquer can help.

Hardcastle’s daughter Kate enters. He remarks on her fashionable clothing, which he dislikes. Kate reminds him of their deal: she wears what she likes in the morning and dresses in the old-fashioned style he prefers at night. Hardcastle reveals big news: his friend Sir Charles’s son, Marlow, is coming to visit, and Hardcastle hopes Kate and Marlow will marry. Hardcastle says Marlow has a reputation for being handsome, intelligent and very modest. Kate likes all but the last part of this description and resolves to try to make a good impression on Marlow.

Hardcastle exits, leaving Kate to think over her visitor. She is joined by her cousin Constance, whom she tells about Marlow’s impending visit. Constance tells her that she knows Marlow: he is the best friend of her suitor, Hastings. The odd thing about Marlow is that he is terribly shy around upper-class women, and therefore often seduces lower-class women instead. Mrs. Hardcastle wants Constance to marry her cousin, Tony, so that Constance’s inherited jewels stay in the family. Constance tells Kate that she pretends to be willing to marry Tony so that Mrs. Hardcastle won’t suspect she loves Hastings. Lucky for Constance, Tony doesn’t want to marry Constance any more than she wants to marry him.

The scene changes to a bar, where Tony is drinking with a group of lower-class men. The bar’s owner says that two fashionable-looking men have arrived who say they are looking for Mr. Hardcastle’s house. Tony realizes that this must be Marlow and decides to trick Marlow into believing Hardcastle’s house is an inn.

Act II begins with Hardcastle trying to teach his servants how to behave in front of his guests. Soon after, Marlow and Hastings arrive at what they believe to be an inn. Hardcastle enters and tries to engage his guests in conversation, but the two young men ignore what he says, believing him to be a lowly innkeeper. Hardcastle is shocked by their rude, presumptuous treatment of him.

Marlow insists on being shown his room, so Hardcastle accompanies him. When Hastings is left alone, Constance enters. Upon hearing that Hastings believes he is in an inn, she guesses it is a trick of Tony’s. Hastings says that they should keep Marlow’s mistake from him, because he will be embarrassed and leave immediately if he learns the truth. Hastings urges Constance to elope with him, but she is reluctant to lose her fortune: the jewels, which she will only inherit if she marries with her aunt’s permission. She promises to run away with him once she has the jewels.

Marlow returns, complaining that Hardcastle will not leave him alone. Hastings tells Marlow that by coincidence, Constance and her cousin Kate are both at this inn. Marlow freezes in anxiety. Kate enters and tries to engage Marlow in conversation, but once Hastings and Constance leave Kate and Marlow alone, Marlow is too nervous to complete his sentences or even look at Kate’s face. He ends the conversation abruptly and rushes off. Before exiting the stage, Kate reflects to herself that, if he weren’t so shy, she would be interested in him.

Act III begins with Hardcastle and Kate comparing their very different impressions of Marlow. He expresses shock at Marlow’s boldness, while she finds him incredibly shy. Kate convinces her father that they should give Marlow another chance to see what his true character is.

Kate enters accompanied by her maid Pimple and wearing the old-fashioned dress her father prefers. She has learned about Tony’s prank and laughs at Marlow’s belief that he is in an inn. Pimple says that Marlow mistook Kate for the inn’s barmaid. Kate says she will take advantage of the mistake, which will enable him to talk to her without such shyness. Pimple exits, and Marlow enters. Kate, pretending to be a maid, speaks to Marlow in the accent of a lower-class woman. Marlow finds her beautiful and immediately begins to flirt with her. He tries to kiss her, but Hardcastle walks into the room and sees them. Marlow flees the room, and Hardcastle tells Kate he is determined to throw Marlow out of his house. Kate persuades her father to give her time to prove to him that Marlow is not what he seems.

Act IV begins with Constance and Hastings planning their elopement. Constance tells Hastings that she has heard Sir Charles will soon be arriving, and Hastings tells Constance that he has entrusted her box of jewels to Marlow to keep them safe. They both exit.

Hardcastle enters and begins to argue with Marlow, whose servants have gotten drunk. Storming away, Hardcastle says he would never have predicted such rudeness from Sir Charles’s son. Marlow is confused by this remark, but at that moment, Kate enters. Marlow, beginning to understand something is amiss, asks Kate where they are, and she tells him that they are at Mr. Hardcastle’s house. Marlow is horrified at his error. Kate does not yet reveal her true identity, pretending instead to be a poor relation of the family. Marlow announces his departure, and Kate weeps at the news. He is touched to see how much she cares about him.

Tony and Constance discuss her plan to elope with Hastings, even without the jewels. Mrs. Hardcastle enters and the two cousins pretend to flirt so she won’t suspect the planned elopement. A letter comes from Hastings addressed to Tony, but because Tony cannot read, his mother reads it to him. The letter reveals the plan for the elopement. Mrs. Hardcastle is furious and tells Constance she is sending her far away to Aunt Pedigree’s house. Hastings enters and yells at Tony for giving away the secret. Marlow enters and yells at both Tony and Hastings for deceiving him about where he is. Constance is utterly distraught and begs Hastings to stay faithful to her even if they have to wait several years to marry. After Constance leaves, Tony tells Hastings to meet him in the garden in two hours, promising to make it all up to him.

In Act V, Hardcastle and the newly arrived Sir Charles laugh over Marlow’s having mistaken the home for an inn. Hardcastle says that he saw Marlow take Kate’s hand and he thinks they will marry. Marlow enters and formally apologizes to Hardcastle. Hardcastle says it doesn’t matter, since Marlow and Kate will soon marry, but Marlow denies having feelings for Kate. When Hardcastle refuses to believe him, Marlow storms out. Kate enters and assures the two fathers that Marlow likes her. She tells the two fathers to hide behind a screen in half an hour to see proof of Marlow’s feelings.

Out in the garden, Tony arrives and tells Hastings that he has driven his mother and Constance in a circle instead of taking them to Aunt Pedigree’s house. Mrs. Hardcastle is terrified, thinking they are lost in dangerous territory. Hastings rushes off to find Constance. Elsewhere in the garden, Hastings tries to convince Constance to elope with him. She says she is too exhausted from the stress of the night to run off. Instead she wants to explain their situation to Hardcastle and hope that he can influence his wife to allow their marriage.

Inside the house, Hardcastle and Sir Charles hide behind a screen and watch Marlow and Kate talk. Kate no longer pretends to be a barmaid, but speaks in her normal voice. Marlow says he wishes he could stay with her, but he does not want to disappoint his family by marrying someone of lower birth. Kate tells him she has the same background as the woman he came to see. Marlow kneels before her, and the two fathers burst out from behind the screen, asking why he lied to them about his feelings for Kate. Marlow learns Kate’s true identity and is embarrassed again at having been so deceived. 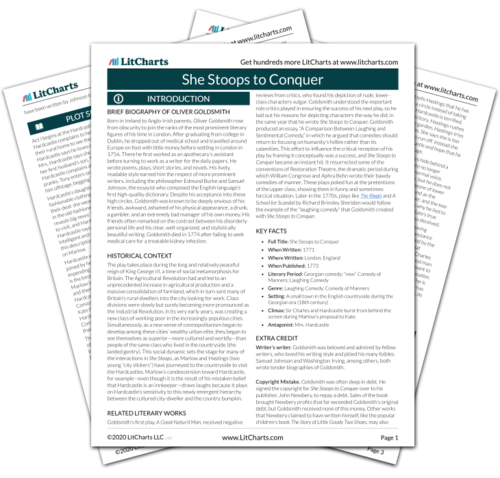 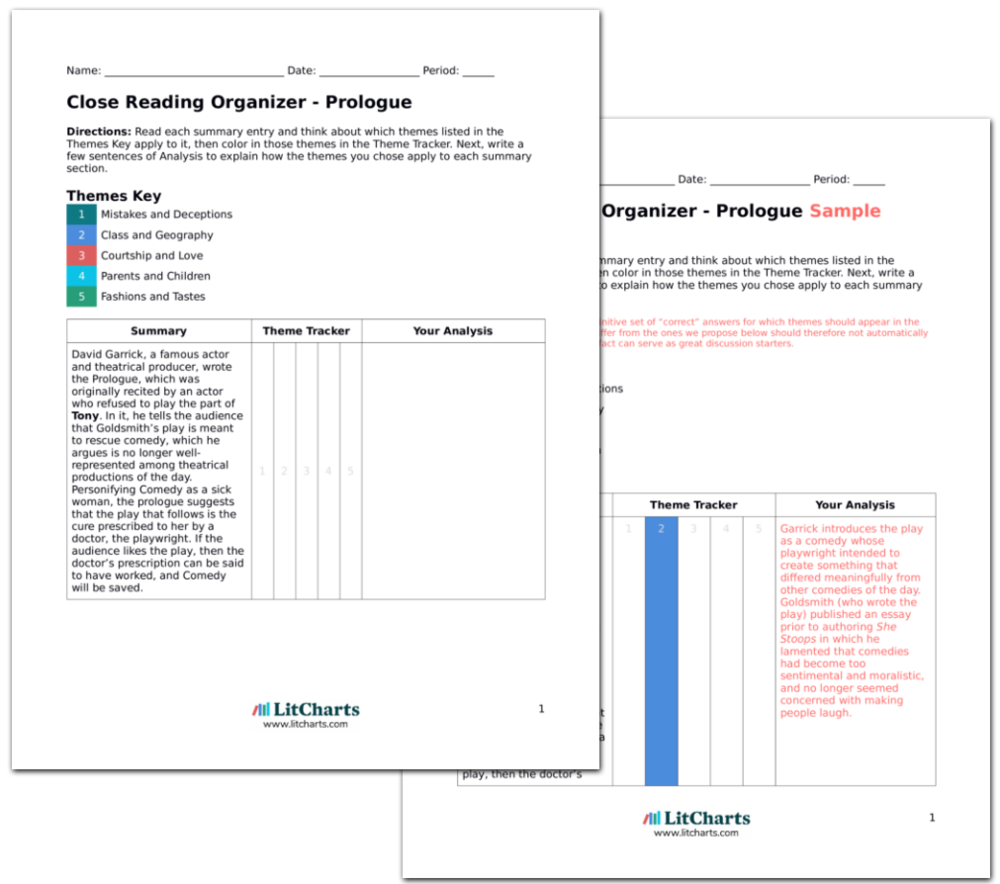