Download this LitChart! (PDF)
Teachers and parents! Struggling with distance learning? Our Teacher Edition on Shiloh can help.

Welcome to the LitCharts study guide on Bobbie Ann Mason's Shiloh. Created by the original team behind SparkNotes, LitCharts are the world's best literature guides.

A concise biography of Bobbie Ann Mason plus historical and literary context for Shiloh.

A quick-reference summary: Shiloh on a single page.

In-depth summary and analysis of every of Shiloh. Visual theme-tracking, too.

Explanations of Shiloh's symbols, and tracking of where they appear.

An interactive data visualization of Shiloh's plot and themes.

Born on a dairy farm in western Kentucky, Bobbie Ann Mason possessed a love of literature from a young age. As a girl, she wrote stories based on detective novels and the characters of Louisa May Alcott’s Little Women. While earning her B.A. in English at the University of Kentucky in the late 1950s and early 1960s, she encountered the works of Ernest Hemingway, J.D. Salinger, and F. Scott Fitzgerald for the first time and became even more serious about her work as a writer. After earning a master’s degree from SUNY Binghamton and a Ph.D. in literature from the University of Connecticut, she began teaching writing at the collegiate level and publishing critical work, including a version of her doctoral dissertation on Vladimir Nabokov’s Ada or Ardor and a critical text called The Girl Sleuth, a feminist reading of Nancy Drew and other fictional girl detectives. After her short story “Shiloh” was published in The New Yorker to great acclaim in 1980, Mason pivoted to writing fiction. She published her first collection of stories in 1982 and would go on to publish ten works of fiction, a memoir, and a biography of Elvis Presley over the course of her long career. The recipient of the PEN/Hemingway Award, a grant from the National Endowment for the Arts, and a Guggenheim Fellowship, Bobbie Ann Mason is often cited as a driving force behind the renaissance of the short story that took place in the 1980s.
Get the entire Shiloh LitChart as a printable PDF.
"My students can't get enough of your charts and their results have gone through the roof." -Graham S.
Download 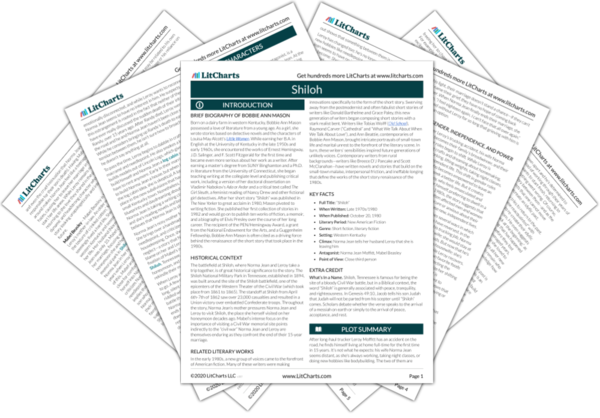 The battlefield at Shiloh, where Norma Jean and Leroy take a trip together, is of great historical significance to the story. The Shiloh National Military Park in Tennessee, established in 1894, was built around the site of the Shiloh battlefield, one of the epicenters of the Western Theater of the Civil War (which took place from 1861 to 1865). The standoff at Shiloh from April 6th-7th of 1862 saw over 23,000 casualties and resulted in a Union victory over embattled Confederate troops. Throughout the story, Norma Jean’s mother pressures Norma Jean and Leroy to visit Shiloh, the place she herself visited on her honeymoon decades ago. Mabel’s intense focus on the importance of visiting a Civil War memorial site points indirectly to the “civil war” Norma Jean and Leroy are themselves enduring as they confront the end of their 15-year marriage.

Other Books Related to Shiloh

In the early 1980s, a new group of voices came to the forefront of American fiction. Many of these writers were making innovations specifically to the form of the short story. Swerving away from the postmodernist and often fabulist short stories of writers like Donald Barthelme and Grace Paley, this new generation of writers began composing short stories with a stark realist bent. Writers like Tobias Wolff (Old School), Raymond Carver (“Cathedral” and “What We Talk About When We Talk About Love”), and Ann Beattie, contemporaries of Bobbie Ann Mason, brought intricate portrayals of small-town life and marital unrest to the forefront of the literary scene. In turn, these writers’ sensibilities inspired future generations of unlikely voices. Contemporary writers from rural backgrounds—writers like Breece D’J Pancake and Scott McClanahan—have written novels and stories that build on the small-town malaise, interpersonal friction, and ineffable longing that define the works of the short story renaissance of the 1980s.
Key Facts about Shiloh

What’s In a Name. Shiloh, Tennessee is famous for being the site of a bloody Civil War battle, but in a Biblical context, the word “Shiloh” is generally associated with peace, tranquility, and righteousness. In Genesis 49:10, Jacob tells his son Judah that Judah will not be parted from his scepter until “Shiloh” comes. Scholars debate whether the verse speaks to the arrival of a messiah on earth or simply to the arrival of peace, acceptance, and rest. 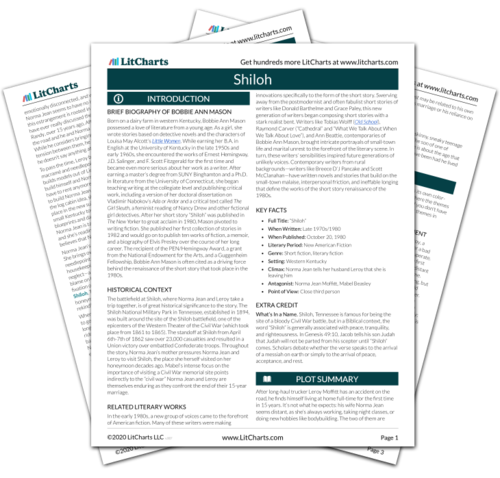 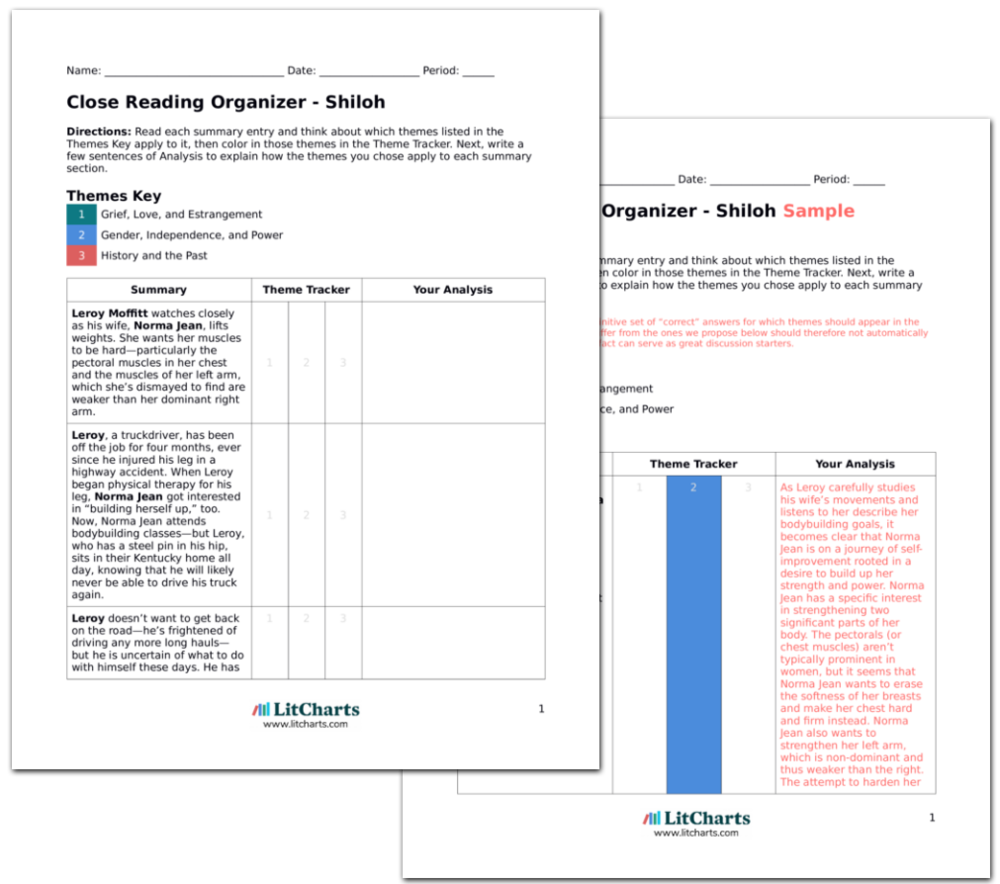