Orwell uses his experience of shooting an elephant as a metaphor for his experience with the institution of colonialism. He writes that the encounter with the elephant gave him insight into “the real motives for which despotic governments act.” Killing the elephant as it peacefully eats grass is indisputably an act of barbarism—one that symbolizes the barbarity of colonialism as a whole. The elephant’s rebelliousness does not justify Orwell’s choice to kill it. Rather, its rampage is a result of a life spent in captivity—Orwell explains that “tame elephants always are [chained up] when their attack of “must” is due.” Similarly, the sometimes-violent disrespect that British like Orwell receive from locals is a justified consequence of the restraints the colonial regime imposes on its subjects. Moreover, just as Orwell knows he should not harm the elephant, he knows that the locals do not deserve to be oppressed and subjugated. Nevertheless, he ends up killing the elephant and dreams of harming insolent Burmese, simply because he fears being laughed at by the Burmese if he acts any other way. By showing how the conventions of colonialism force him to behave barbarically for no reason beyond the conventions themselves, Orwell illustrates that “when the white man turns tyrant it is his own freedom that he destroys.”

The ThemeTracker below shows where, and to what degree, the theme of Colonialism appears in each section of Shooting an Elephant. Click or tap on any chapter to read its Summary & Analysis.
How often theme appears:
section length:
Section
“Shooting an Elep...
Get the entire Shooting an Elephant LitChart as a printable PDF.
"My students can't get enough of your charts and their results have gone through the roof." -Graham S.
Download 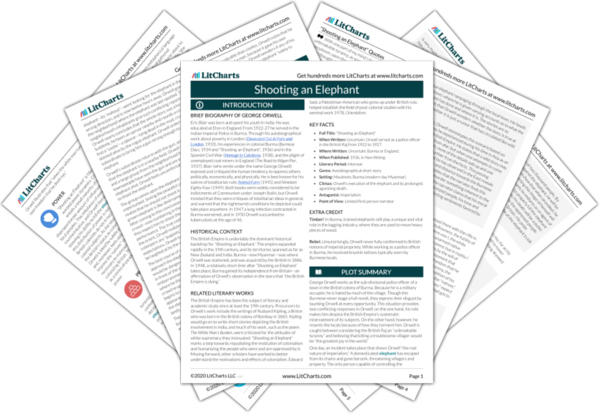 Colonialism Quotes in Shooting an Elephant

That is invariably the case in the East; a story always sounds clear enough at a distance, but the nearer you get to the scene of events the vaguer it becomes.